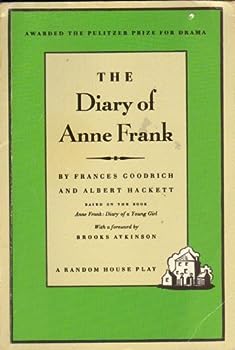 This description may be from another edition of this product. Having fled from Garmany in 1933 to escape the Nazis, Anne Frank and her family were forced into hiding in 1940. Anne, devoted to writing about her experiences, tells us of the tensions and terrors...

So sad! Not right one

Published by AubreyDucrat , 4 months ago
This is a play, not the actual book! I was so sad when i opened it and realized

Published by mari , 1 year ago
the book is a play and not a story

Simply must be read.

Published by Thriftbooks.com User , 16 years ago
If ever there was a text that should not only be read but read and re-read, then this insightful and intensely private collection is it. One cannot stress enough how important the work is, not only in terms of it's strong statement agaisnt racism and facism, but also in terms of it's fragile beauty. The tragedy of the novel is in it's exposed privacy, the emerging spirit of a developing and intelligent young woman and the sense it gives us of a thousand similair stories never told and lost forever.

Published by Thriftbooks.com User , 19 years ago
I have read this book many times, and each time I do so, I am struck that Anne began writing this when she was only 13-years-old. It is as fresh today as it was when I read it the first time about 30 years ago.I am always struck by those who use Anne's quote about people really being good at heart. . . According to Anne's friend, Lies Gosslar, Anne certainly didn't think people were good at heart after being imprisoned at Aushwitz and Bergen-Belsen. Trying to put a happy face on the Holocaust or give it a positive spin is really more than I can stomach.

Published by Thriftbooks.com User , 21 years ago
This is one of the most depressing and yet uplifting stories of all time. I just finished a production of the play and I know that there wasn't a dry eye in the audience at curtain call. Anne's statement that "in spite of everything, people really are good at heart" shows that even close to death, love and hope survive. It's a story that everyone should read; it teaches a lot about life.

my heart melted as i felt her pain

Published by Thriftbooks.com User , 22 years ago
The Van Daans, the Franks, and Dussel struggled in the toughest times of their life and grew to become a loving family of friends. Unfortunately, they departed and each died in their own horrible way. I cried when I read it. I know how terrible it must have been, for I am the great grandaughter of Miep. I have heard all the stories and I was really touched.

My first personal encounter with the horrors of world war II

Published by Thriftbooks.com User , 23 years ago
Even though I was born during the war and grew up with the remembrance of it I was untouched by its reaality. When, at the age of 14, I first read Anne Frank's diary it was perhaps the most amazing encounter with the horrors perpetuated on millions but seen through the eyes of one person. Her little diary gave the world a personal view and meaning to the millions who suffered the same fate. It will continue to be read and lets hope they will be young readers, caught in time to perceive it while their hearts and minds are still impressionable. It simply proves that life is a wonderful mystery. Anne Frank's diary and death were destined to touch the hearts and minds of millions. Her legacy written into history as a trivial, adolescent words scribbled in her little diary to transgress time. My own question when reading her diary was "who was Hitler?" which brought tears to my mother's eyes. She said, I was told that someday your children will ask ! that question. One great and powerful forgotten, another, a little sparrow, remembered by millions.
Copyright © 2020 Thriftbooks.com Terms of Use | Privacy Policy | Do Not Sell My Personal Information | Accessibility Statement
ThriftBooks® and the ThriftBooks® logo are registered trademarks of Thrift Books Global, LLC