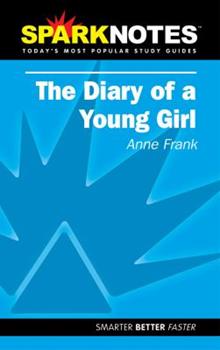 The Diary of a Young Girl: Anne Frank (SparkNotes) (Volume 1)

by Anne Frank and SparkNotes

Get your A in gear They're today's most popular study guides-with everything you need to succeed in school. Written by Harvard students for students, since its inception SparkNotes(TM) has developed a loyal community of dedicated users and become a major education brand. Consumer demand has been so strong that the guides have expanded to over 150 titles. SparkNotes'(TM) motto is Smarter, Better, Faster because: - They feature the most current ideas...

Published by Thriftbooks.com User , 14 years ago
An innocuous gift, a diary a girl treasures. She writes in it, "I will call you, Kitty." A scrawny teenage girl begins writing her way into the hearts and minds of mankind around the world. This book will be her legacy and her memorial. Her family, refugees from Germany, immigrates to Holland where the boots of nazi oppression and psychopathic poison are not far behind. Ann's family hides from the invader in an attic where the Dutch who are the antithesis of German intolerance give them meager rations. Ann's writing tells us about herself, and her relations with her family and the van Danns cramped in an attic always starving, and never being sure when they will be brought food, or if the police will find them. Through the turmoil of maturation from girl to woman,we learn of a girl's decency, innocence, and goodness. All the hope for freedom is gone as the police discover the hide-out, and Ann is taken to a concentration camp where she dies two months before its liberation. Going back to the attic, her father finds her diary that will bring her immortality. Her legacy begins. We all would have wanted to see Ann Frank and thousands of others like her live. No one, especially a young innocent girl should be treated so inhumanly without the least iota of mercy or decency. The irony is that her seemingly meaningless death among millions is what gave her life meaning, and allowed her story to be told to the world. This book is a reminder that love and kindness survives the most vile lack of humanity. It is a testament to the human spirit. Ann Frank would have been seventy-eight June 12, 2007.

Young girl, heck. Diary of a young woman is more like it.

Published by Thriftbooks.com User , 17 years ago
Imagine that someday you are remembered for all eternity at a very particular time and at a very particular age. You could be remembered forever as being 25 on September the 11th or you could be remembered as being 44 when JFK was shot. It seems awfully cruel for someone to be remembered between the ages of 13 to 15. Do you remember what you were like at that age? Would you want anyone to think of you as that old for as long as your name is remembered? Such is the fate of Anne Frank. Now, I never read this book when I was young. High schools, in my experience, tend to assign the play version of this story when they want to convey Anne Frank's tale. Anne tends to be remembered as the little girl who once wrote, "I still believe that people are really good at heart" in spite of her sufferings. So I should be forgiven for expecting this book to be the dewy-eyed suppositions of a saintly little girl. Instead, I found someone with verve, complexity, and a personality that I did not always particularly like. What I discovered, was the true Anne Frank. The diary of Anne begins when she is 13 years of age and the Jews are already wearing yellow stars in Amsterdam. Anne is your usual precocious girl, flirting with boys and being impudent when she can get away with it. When at last the time comes for the Franks to go into hiding (Margot Frank, Anne's sister, has been issued an order for her removal) they do so with another family, the Van Daans. In a small floor hidden above Otto Frank's old workplace the two families are aided by faithful friends and employees. Over the course of the diary we watch and listen through Anne's eyes as, for two years, the people in the attic are put through terrible deprivations and trials. There are good times and bad, but Anne is a singularly biased narrator and her observations must usually be taken with a grain of salt. After a while you become so comfortable with Anne's observations and voice that the final page of the narrative comes as a shock when the capture of Anne and her family is finally announced. I recently had the mixed pleasure of finding and rereading my own diary from around the age of 14. After forcing myself to look through the occasional passage here and there I was forced to conclude that for her age, Anne is a marvelous writer. She has a sense of drama, tension, and narrative that is particularly enthralling. It's painful to think about what a great writer she could have been had she lived any longer. Honestly, the Anne I met in this book showed all the worst characteristics of her age. I found her detestation of her own mother to be particularly repugnant. Then I remembered... she's an early adolescent. Of course she hates her mother! Of course she's just simply awful a lot of the time. But you can see who she's becoming, and that's what makes the book so hard to get through. You can see her growth and her character. You know that she's learning and trying to understand what it means to be a h

Published by Thriftbooks.com User , 19 years ago
Like many, I read this book in elementary school. It was one of the most moving, powerful experiences I've ever had. We all know the story by now. Anne Frank and her family are Jews hiding from the Nazis during World War II. The book is Anne's diary about her time in hiding. Every detail of Anne's experience rang true -- there were no doubts in my mind as I read it that this truly was Anne's diary, even though I knew parts of it were missing. The way she wrote spoke to me as a human being in general, but as a 12 year old it was amazing to me to realize that this person who was going through such an awful ordeal also had some of the same feelings, experiences, emotions, worries, hopes, and dreams that I did. Anne Frank's diary encouraged me to start keeping my own. This is obviously a book about World War II, but it's also about adolescence, the human condition, families, and writing. It's possibly one of the most important books of the 20th century.

There, but for the grace of God, go I

Published by Thriftbooks.com User , 20 years ago
I had the wonderful opportunity to visit Germany and Austria for two weeks (I just got back two days ago, in fact), and one of the most poignant memories was my trip to KLB, or Konzentration Lager Buchenwald. Better known simply as Buchenwald, it was a labor camp filled primarily with political prisoners, Gypsies, Jews, homosexuals and other "untermenschen", distinguishing it from the death camps of Auschwitz and Dachau. Despite it's nature as a "mere" labor camp, thousands died there and were incenerated in the specially constructed crematorium there (which, ironically enough, was placed in viewing distance of the specially contructed zoo and pleasure zone built for the officers' families). Walking through those silent halls and down the treaded paths of history, I was struck for the first time in my life of the awful truth that was the Holocaust - not simply that 6 million Jews were eradicated, along with millions of others. 6 million is simply a number, "full of sound and fury," but also "signifying nothing." To understand the Holocaust (if one can understand such a thing at all), you simply have to look into the cell of a soon to be dead prisoner; to stand in the mustering ground of the prisoners' barracks and feel the hard gravel crunch beneath your feet; to peer into the terrifyingly etched interior of a human oven and let your mind try to wander its way through it all; to imagine, at the end of all other imaginings, what it must've felt like to live HERE. Not 6 million. Just you. Or someone you love.THAT'S why Anne Frank and her diary will live on. Not because it' s a well written example of literary prowess. Not because it has a magnificent plot. Not because it has lasting value as a work of literature. It will live on because it's the voice of so many people who went voiceless, who went into the night, into the dark, to be shot from behind or in front, blindfolded or eyes open, gassed in sterile shower rooms or tortured to death in the name of "science." I've read some of the reviews here, and the majority of those who gave this book anything less than five stars usually point to the diary's defecincies in the "interesting" section. Time and time again, that's exactly why I found this book to be so engrossing - whatever faults it has comes from the writer not being a writer! She was a girl, on verge of her flowering into womanhood, full of the hopes and dreams and fears we all are at that age. Whatever picture this book paints is one of her, to remind us not only of who she was and that she was real but also to remind us of those 6 million (and more, so many more, in those ghastly 6 years of death) silent voices. The trip to Buchenwald was not totally disenheartening. In the middle of the mustering grounds is a small marker, maybe 4 feet by 4 feet, surrounding by a small collection of flowers and cards. It's made entirely of a steely gray metal, and in the middle of it is a small square with words on it: Albaner, Algerier, Andarraner, Ar

A poignant book filled with tears and laughter

Published by Thriftbooks.com User , 21 years ago
A lot has been said about "The Diary of Anne Frank." Some people have even claimed that it is a fake, which is an outrageous claim that denigrates those who died in the Holocaust and those that survived. This book is testament to a child's spirit and humanity as she hides in ever deteriorating circumstances with her family in an attic over an office in Amsterdam. We are witnesses to her first kiss with Peter a boy also in hiding, and her stormy relationship with her mother which she tries to resolve often unsuccessfully. We see flares of brilliance as she tries to understand human nature as well as the innocence of youth when she says, "basically I believe most people are good." The Diary of Anne Frank would probably be just an ordinary young girl's memoirs if the Holocaust had not happened. However the Holocaust did happen and Anne Frank's diary stands for all the young girls whose lives were ended before they had a chance to blossom. If any book was to be made compulsory reading in schools then this book should be it. Through Anne Frank we will never forget her humanity or for that matter our own.
Copyright © 2020 Thriftbooks.com Terms of Use | Privacy Policy | Do Not Sell My Personal Information | Accessibility Statement
ThriftBooks® and the ThriftBooks® logo are registered trademarks of Thrift Books Global, LLC