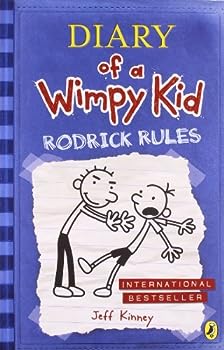 (Book #2 in the Diary of a Wimpy Kid Series)

The highly anticipated sequel to the #1 NEW YORK TIMES bestselling book Secrets have a way of getting out, especially when a diary is involved. Whatever you do, don't ask Greg Heffley how he spent his... This description may be from another edition of this product.

Published by Victoria , 8 months ago
I ordered this book for my son, who found this book at the school library and now won’t stop reading it. It’s in great shape.

If I could give zero Stars I would!

Published by Diary of a wimpy kid Roderick rules , 1 year ago
I appears this site does not even look at or in the books they sell. I expect "very good" condition to possibly have minor wear, NOT to be completely vandalized! My son was extremely disappointed. What a waste of money. Do better

Published by Kids Nurse , 2 years ago
Home health nurse here. Bought several used audiobooks to play for a 10 year old, (though mentally newborn) blind patient. I was hoping audiobooks would entertain him while I do paperwork because he loves hearing voices around him and I only know so many kids songs well enough to sing while charting. Wish I’d have gotten both disks.

Published by Momof3 , 2 years ago
My child LOVES these books. I ordered one described as “like new” but when we received there was writing ALL over the book including several phone numbers, plus a small dent on the cover. My son was really upset with the condition of the book, I don’t blame him.

The book itself is wonderful

Published by Courtney , 2 years ago
My boys love the Wimpy Kid series. They are 10 & 11 and find the humor and situations relatable. We ordered the "acceptable" quality of book and in general the condition was perfect. Until you get to the several pages (10+) that were stuck together due to an organic matter of some sort. We believe it was dried mucus. This is the sole reason for the low rating - had we not had to pick boogers off the pages we would have given 5 stars. Organic matter on pages should NOT be considered acceptable under any circumstances.

Published by Thriftbooks.com User , 3 years ago
i received this book and when i opened it there was writing all over it so i am donating it to my local library and i ordered another one this time i ordered like new instead of GOOD so far all the other books that i have bought are in really good condition i am still waiting on the other books i ordered but other then being wrote in the book was in good shape no tears or anything like that

Published by Thriftbooks.com User , 14 years ago
I recommend that you should read this book because the hand written diary style fits in well with the pages of the book. He includes every day things like going to a party or swimming, but puts a humorous twist on it. Gregory's (the wimpy kid) older brother Rodrick who is a lazy under achiever is in a band that can't play. He is either making Gregory's life hell, or playing with his band in the basement. As well as having a teasing older brother he has a snitching younger brother called Manny who tells on him constantly. His best friend Rowley is a bit of an idiot and can be quite annoying he also knows something that Gregory doesn't want people to know, could his best friend tell? Personally I think that Gregory is most certainly not a wimpy kid.

Published by Thriftbooks.com User , 14 years ago
I bought this for my 10 year old son. Any book that encourages children to read is a wonderful investment. Not only is my 10 year old enjoying this purchase, but his 11 year old older brother has read it to his 4 year old brother, and his 7 year old younger brother is reading it now. It is a fun read for many ages,and as a parent it brings me much pleasure to find my sons share in spending time that doesn't involve television or video games. Definitely worth the price!

The Perils of Middle School in a Diary Format

Published by Thriftbooks.com User , 14 years ago
He did it again. Jeff Kinney has taken the ups and downs of middle school, friendship, parents and brothers and turned them into a wonderful diary-novel complete with pictures. It's a nonstop read. I laughed so hard and the characters stay with you long after you put the book down. This is a great book for reluctant readers. The best news, there is a third diary on the way!!!!

A wonderful book worth a read, or two, or four!!!

Published by Thriftbooks.com User , 14 years ago
Greg Heffley's life is a halirious mixture of class and comic. This is a book that will grab your attention and keep it there until the very last line of halarious and fantastic comedy! Buy it. Read it. Live it!
Trustpilot
Copyright © 2022 Thriftbooks.com Terms of Use | Privacy Policy | Do Not Sell or Share My Personal Information | Accessibility Statement
ThriftBooks® and the ThriftBooks® logo are registered trademarks of Thrift Books Global, LLC