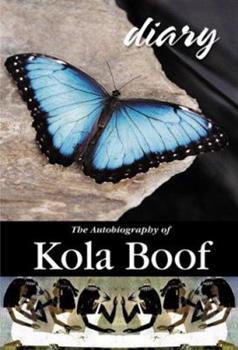 Diary of A Lost Girl: The Autobiography Of Kola Boof

A great woman and a great book!

Published by Thriftbooks.com User , 15 years ago
I hadn't heard of Kola Boof until a few weeks ago, when the news came out that bin Laden had a "thing" for Whitney Houston-- according to his former mistress/sex slave. Always interested in the subject matter of Islamic terrorism, I ordered this book. I am so glad I did, too. Kola Boof is a wonderful and HONEST writer. This is really one of the most passionate and honest memoirs I have read. She writes of her childhood growing up Muslim in Sudan-- the child of a Sudanese and an Egyptian. She shares her memories of her parents' love and her parents' murder. She shares her pain at being subsequently abandoned by her grandmother. Of the horrors she saw perpetuated by Muslim Arabs. It's really an incredible book. Kola Boof's story is more of a testament to her life and her life's calling-- which is to educate the public about Islam and Islam's aim for Islamic rule and a return to the Caliphate. The author has seen unbelievable evil including rape, murder, beatings, theft. She talks about the slaves that the Muslims kept (her father was unhappy about this and spoke out-- that's why he was killed). She shares all of this with the reader eloquently and passionately. She will not be silenced. Kola has denounced Islam and considers herself an African Woman and believes in "the Goddess". She is a feminist. However, because she criticizes Islam, she has been virtually ignored by the press and ignored by the Democratic party, although she is definitely a liberal democrat herself. The author points out the hypocrisy today within the Democratic party and the party's hypocritical tolerance for those who are intolerant of all, while being intolerant of those who just wish to speak the truth, share their stories, and share their information. This book is for EVERYONE, however. Please don't dismiss it because of your political leanings. This book is too important. Some might find Kola a bit strong. This is her strength, though. She will not be silenced in the face of injustice. Her past could have cowered her, instead it gave her unbelievable strength. She is definitely a woman to be admired and listened to.

Published by Thriftbooks.com User , 15 years ago
My girlfriend dared me to read this book. It literally knocked the wind out of me. It's beyond excellent, it's sorely needed in the black community. Tavis Smiley, Farrakhan and Eric Dyson should take pointers from Boof on black issues. My favorite was Boof's essay "The Authentic Black Male", but I'm reading the whole book again this weekend. I warn potential customers that there's an extraordinary amount of sex and violence, but not out of context. This is similar to Malcolm X's autobiography I thought.

Published by Thriftbooks.com User , 15 years ago
I must confess I knew nothing of Kola Boof until I stumbled on her work while searching for material on political Islam. Kola Boof would have predicted my ignorance since I am a retired academic of Scandinavian ancestry living amid the cornfields of Iowa. But I found her (mixed) autobiography and collection of essays and poems fascinating and illuminating nevertheless. Her autobiography is a tale of the triumph of indomitable will over adversity. Can one believe that a girl who was born along the upper Nile, who witnessed her parents being murdered, and was rejected by her own grandmother for being too black, and who was then rescued by a UNESCO worker and brought to the US where she received private tutoring and became a writer and poet? But there is more. She returned to North Africa as an adult and became a soft porn movie star and a mistress to Osasma bin Laden (before the events of 9/11/01). She then lived for a time in London and California where her writings against the Sudanese government brought a fatwa against her demanding she be executed for blasphemy. She finally settled down long enough to bear and raise her sons (but admits she never married their father, and admits that even this "common law" marriage eventually failed). Her hope for the future is to eliminate (or at least delegitimize) the racist denigration of black women by black males, and to campaign for an end to slavery and the oppression of blacks in the Sudan. (Whew!) My first instinct was that her autobiography might just be a tall story, a sort of "urban myth" about self-redemption of the kind which has been so prominent in the news of late. But I had to admit in the end that all the objective, checkable, features of Kola Boof's autobiography checks out. (Her credibility was challenged by the NY Times, but follow-up investigations by Fox News and others confirmed all the objective features of her story. The tallest of her tall tales is that she was the mistress of Osama bin Laden in Morocco before 9/11. But bin Laden supporters do not deny the story. They apparently think a fling with a black girl is so minor a matter as to be beneath notice.) Still, I do believe she padded her account at places. For example, she tells two stories about her involvement in gunfights. The first was in California, where a car-load of young Arab Muslim assassins tried to "hit" her with a drive-by shooting. She says she grabbed two concealed handguns she had with her and charged the car firing with a gun in both fists. She says she blew out their rear tires but they got away leaving blood on the street. The second gunfight occurred in London, where a man broke into her bedroom intent on rape and she grabed a concealed handgun and fired one shot, which wounded the assailant and drove him off. Neither story is at all plausible. Handguns are heavy, and two would make a mighty bulky purse or set of holsters - not at all easy to conceal. Firing handguns accurately is difficult at

The Tragedy of this Book... (WARNING)

Published by Thriftbooks.com User , 15 years ago
Radio Producer-Buffalo, NY WUFO 1080 AM Book Review Hey, this is Kristof Stevenson, one of the producers of Pat Freeman's current affairs radio program "THE MESSAGE" WUFO 1080 AM in Buffalo---not the kinda guy who normally writes book reviews, but this particular book--I gotta tell everybody about. In preparation for the show, I read Kola Boof's autobiography not knowing what to expect as I'd barely heard of her before, and I have to say that I consider this book to be a new classic along the lines of "THE AUTOBIOGRAPHY OF MALCOLM X" and that I couldn't put it down. My wife is reading it now and she can't put it down either. I warn you that there's an awful lot of graphic sex in the book, there is Ms. Boof's abortion, her bouts with psychiatric problems and a lot of very graphic violence during her experiences in Africa's civil war and later as a female soldier in the SPLA (the initiation scene had me squirming), but if you can stomach the sex, language and violence, then you will find a very educational woman-oriented BOOK OF WISDOM at the center of this story. This woman has lived a remarkable life and from page one, the truth about human nature and the evils of the world are layed in your palm to explode in your face, because Boof is such an awesome writer. Unexpected chapters like Boof's essay "The Authentic Black Man" are so gut wrenching and relevant socially that it's worth the price of the book by itself. I also found myself crying at the book's opening when Ms. Boof was orphaned and taken in by an Irish gentleman from UNICEF and shuttled from home to home following the death of her biological parents who were killed for speaking against slavery in Africa, and then later when Ms. Boof fell in love with the father of her children in the chapter "I Never Married My Husband", I I've come to the conclusion that the real tragedy of this book is that everyone seems to think it's about Osama Bin Laden or that the focus is on him, when the reality is--the book focuses on an even more fascinating character, Ms. Kola Boof herself. While the book does detail her experiences with Osama Bin Laden in great detail, and while I really did feel as though I'd been with Bin Laden myself because of Boof's great writing skills, I still enjoyed the rest of the book a lot more than I did the chapters on Osama Bin Laden. For those who heard the broadcast, not only did the host of our show find "Diary of a Lost Girl" to be one of the best books he's read in some time, but so did I. I was blown away by this book and I believe that anyone who reads it will be stunned by the tenderness and truthfulness of this woman's story. It's incredibly powerful and I'm recommending it to everyone I know. ***FIVE STARS!!!!**** all the way!!!!! Unforgettable!
Copyright © 2020 Thriftbooks.com Terms of Use | Privacy Policy | Do Not Sell My Personal Information | Accessibility Statement
ThriftBooks® and the ThriftBooks® logo are registered trademarks of Thrift Books Global, LLC