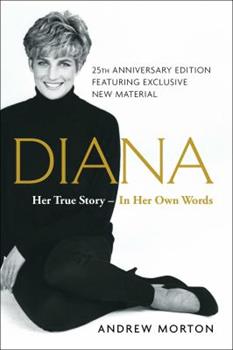 Diana: Her True Story--In Her Own Words

The sensational biography of Princess Diana, written with her cooperation and now featuring exclusive new material to commemorate the 20th anniversary of her death. When Diana: Her True Story was first published in 1992, it forever changed the

Published by NYCDCgal , 1 year ago
Diana's lack of self-awareness and dim intellect, coupled with her self-pity and delusions of grandeur (she always knew she was special, she informs the reader), make this book exceedingly dull. How anyone could have lived her life and produced a brainless, humorless, charmless narrative speaks for itself.

Published by Ksyushkin , 1 year ago
I bought it after watching documentary on Netflix. It's very pocket size book and it has photos of princess Diana when she was young girl. It's not a large memoir book.

Published by Thriftbooks.com User , 4 years ago
I liked this book, with the anniversary of her death this year, there was a lot about her on tv. So, I had heard a lot about this book, nothing new. Easy, quick read.

Published by Thriftbooks.com User , 5 years ago
I ordered the book from here twicevery and when it is delivered I got two different books I didn't order. The first one was the same book I ordered and the second book was something I would never be in trestle in. The other books I ordered was in great condition but I still have not received the one book I dearly love to read DIANA HER TRUE STORY.

Published by Thriftbooks.com User , 18 years ago
If you need to read just ONE book rehardsing Princess Diana... This is THE one you must pick! You will be delighted with all the details and will admire even more this wonderful person. A book you MUST have on your shelves!

Published by Thriftbooks.com User , 18 years ago
I enjoyed reading this book, and found it to be fascinating. However, I have since read "A Royal Duty" by Paul Burrell. Some of the statments made in these two books are conflicting. In "Diana, Her True Story", it is made to sound like Princess Diane was always at odds with Queen Elizabeth and Prince Phillip. In "A Royal Duty", Paul Burrell tells a different story. He maintains Diana had a loving and close relationship with the Queen and Prince Phillip right up until the time she died. It is a very interesting book, but after reading almost everything written about Princess Diana, there are so many different views and stories, it is hard to know which to believe.

Good, but definitely one sided

Published by Thriftbooks.com User , 22 years ago
This book has been called "the longest divorce petition in history", and when you read it, you would have to agree with that statement. But what you have to remember is that at the time when Diana agreed to co-operate with Mr Morton, she was feeling sad, lonely, and unhappy, but she was never allowed to express that publicly. She was unhappy with her life, unhappy with her royal image, and most of all, unhappy with her marriage, yet she couldn't do what anyone else in that situation would be able to do - she couldn't visit a local solicitor and obtain a divorce. Poor woman, she couldn't even go to the gym without being followed by a throng of photographers.When this book was published in 1992, it was dismissed by the establishemnt as being a pack of lies, but ultimately they, and the public too, discovered that it wasn't when Charles admitted his infidelity with the redoubtably ugly and gauche Camilla Parker Bowles, and when, in her astonishingly frank Panorama interview, Diana candidly shared the harrowing details of her eating disorder, bulimia. This book succeeded on many levels. It certainly exposed the shocking truth about the Royal marriage and portrayed the Royal Family, for the first time ever, not as cherished icons but as ordinary individuals with more than their share of character defects (and this means Diana, too!) But it ultimately succeeded in its portrayal of an immature twenty year old girl, who won the hearts of the world when she kissed the Prince, only to have him become a toad, to the beautiful, compassionate symbol of kindness, caring, and humanity that she was when she was so tragically snatched away from the world. For it was the publication of this book that enabled Diana to seek a new life for herself, and in doing so she developed the character traits that enabled us all to fall in love her, this time more completely, again and again and again.

I would definitely recommend this book for several reasons.

Published by Thriftbooks.com User , 23 years ago
I primarily wanted to read it becasue when Princess Diana died, people all around the world mourned for her. She touched the lives of so many people in lots of different ways. Not only did I think it was interesting because of that reason, but also because she had many struggles and hardships to overcome. I found that encouraging. Also, Diana was of the royal family, which added to my curiosity. Lastly, it was very interesting to discover how misleading appearances, statuses, titles, clothes, money, jewelry, and other materialistic things are. These things don't make lives perfect and carefree. Sometimes being a normal, ordinary, plain person isn't that bad after all. Katie Cannada

Published by Thriftbooks.com User , 24 years ago
I have read all of Andrew Morton's books on the life of Diana, Princess of Wales. I believe them to be the most accurate accounts of the real story surrounding her life. The fact that he had her approval meant to me that his books were not meant to hurt her but to tell the real truth. They are a tribute to her and her sons. Had Prince Charles not betrayed her from the start, she would be alive today and would have made him a good queen and queen mother to his son, the future king of England. In searching for the happiness she was denied, she met with trajedy, which could have all been avoided had her life not been devastated by him. My heart was saddened as I read this particular book, thinking all the while if Prince Charles will ever accept any responsibility for her death. It was a wonderful book, I highly recommend it.
Trustpilot
Copyright © 2022 Thriftbooks.com Terms of Use | Privacy Policy | Do Not Sell or Share My Personal Information | Accessibility Statement
ThriftBooks® and the ThriftBooks® logo are registered trademarks of Thrift Books Global, LLC