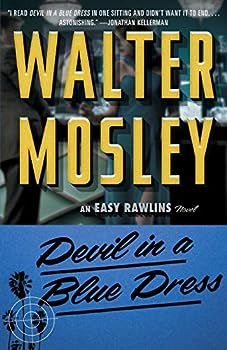 (Book #1 in the Easy Rawlins Series)

The first novel by "master of mystery" (The New York Times) Walter Mosley, featuring Easy Rawlins, the most iconic African American detective in all of fiction. Named one of the "best 100 mystery... This description may be from another edition of this product.

Published by Thriftbooks.com User , 17 years ago
Walter Mosley is one of the Great Contemporary American Writers, and he achieves this status from his reworking of a familiar genre - Raymond Chandler styled detective fiction - and giving it a fresh voice. Easy Rawlins has the hallmarks of a Sam Spade, if you like, but he's an unwilling detective, a black man who just wants to get ahead in the promising environment of post-war Los Angeles. But he's thrown into a mystery that takes us, page-turningly, through the various strata of LA society and leads us both to a statisfying yet violent resolution of the whodunnit, while also taking us to a place of deeper understanding. In fact Mosley's series of Easy Rawlins stories that follow this excellent novel maintain the high quality of suspense writing while tracing a credible, thoughtful post-war social history of modern USA, as seen through the astute and increasingly wary eyes of Rawlins. The series is great reading, and while Mosley uses the suspense genre to tell a deeper story he always writes with wry humour, deep passion, an eye for the ladies and a twitchy attitude to violence as part of life. His invention of Raymond "Mouse" as Rawlin's disturbingly trigger-happy friend from Texas keeps the plotting always one step from catastrophe. This is one novel, incidentally, where the film version is every bit as good. Denzel Washington captures Easy Rawlins just perfectly, and the film direction is quite superb.

Try Blue Dress On For Size

Published by Thriftbooks.com User , 19 years ago
Easy Rawlins is not the typical private detective, but he is the freshest one to come around in a long time. Easy is an African American WWII veteran from Texas, now living in 1948 L.A. where he proudly owns a modest home. The home is all he has to be proud of since he got fired from his job at a defense plant. Life for Easy is not easy at all. Then one day, a white man dressed in a white suit offers Easy good money to locate a beautiful blonde known to hang out at black clubs. For a man with a mortgage and no money coming in, the offer is too good to be true. But then offers like this usually are. The plot sounds typical, but Mosley's writing is anything but. Mosley paints a clear and atmospheric picture of racial segregation in post-war L.A., but that picture is not overexposed. Easy not only has to endure the dangers of finding this girl, he must do it in a hostile background where white policemen and higher-ups look for any type of crime that they might pin on him. The story of the transplanted man from the south living on the west coast is not unfamiliar, but making him a black man facing prejudice on every side makes the story more alive and the plot more tension-filled. Again, this is not done in a heavy-handed way, but with a subtle touch that makes you want to turn the pages. Mosley is very much at home with the hard-boiled style of crime noir and it shows on every page. This is not a Hammett or Chandler re-hash. This is a fresh, lively, exciting mystery from a very fine writer. If you haven't experienced Mosley and Easy Rawlins, pick up the Blue Dress and try it on for size. 215 pages

Published by Thriftbooks.com User , 20 years ago
With the debut of self-styled sleuth Easy Rawlins in Devil in A Blue Dress, Walter Mosley has fashioned a determined survivor. Easy's life is anything but, as each hazy post -World War 2 L.A. day brings a new wave of brutal physical and psychological challenges the likes of which are seldom approached on the other side of the tracks in Raymond Chandler's universe. Fired from his defense plant job and struggling to make the mortgage payments on his beloved, modest house, Easy soon finds himself in the employ of a mysterious fellow bar patron who wants him to find a missing blonde beauty. The subsequent search is an odyssey through both the black world of jazz clubs and bootleggers, and the white world of sterile, corrupt and ominous institutions. At heart the mystery is about race and all the complicated struggles that attend that issue. When justice is at best a sham, Easy and his friends and enemies must navigate in a murky moral realm where loyalty to one's friends and optimism of will are essential to survival. Easy's loyal but vicious friend Mouse, one of Mosley's most colorful characters, sums up the credo of their black world when he says to Easy, " You gotta have somebody at yo' back, man. That's just a lie them white men give bout makin' it on they own. They always got they backs covered." The strength of Devil in A Blue Dress is that it can tackle the knotty issue of race within the format of the fast-paced, entertaining crime fiction genre.

Devil in a Blue Dress

Published by Thriftbooks.com User , 21 years ago
Book Review for Devil in a Blue Dress By Walter Mosley Kristen Shepard Montgomery High School This is one of the best mystery books that I have read. I have never read any of Mosley's works so lets just say that he made a good first impression on me. I've always been interested in the spy/investigative books so that is what brought me to read Devil in a Blue Dress. The setting is Los Angeles in the 1940's and Easy Rawlins, the main character and a private eye, is a black veteran. He was just fired from his job at the aircraft factory and he can't pay mortgage for the home he loves. Joppy Shag is the owner of an illegal bar and is friends with Easy. My favorite character was Dewitt Albright. " His grip was strong but slithery, like a snake coiling around my hand" (p.2). Dewitt is friends with Joppy too, and is a white attorney/thug, who needs someone to find this white woman named Daphne Monet. Daphne is known to patronize the black jazz clubs. Dewitt asks Easy to do this search. Things aren't exactly going to well for him and he needs all the money he can get, so he accepts the deal. As he gets deeper in the case more and more bad things start happening; for example people start showing up dead. Easy decides to call a good friend who still lives in Easy's hometown, Huston. His name is Mouse and he was probably the worst thing to do at that time for Easy since he has been killing quite a few people. Somehow Easy is being blamed for some of the murders and if he can't find out who has been killing all these people then he can be sent to death row. There is still the problem of finding Daphne and what he finds out is that she isn't all that she seems to be, for she is in love with a very wealthy man named Mr. Carter and tries to be something she's not. When investigating Easy finds that he has the talent for questioning people in a way of getting the info he needs, take for example him and Mr. Carter, a man with a lot of power. Soon he finds himself talking to all sorts of rich white men like they were best friends. Still, being black in a white-ruled society heads him to information that he might not otherwise be able to obtain, even if the reason is degrading. This book was great. It made me another one of the many Walter Mosley fans and I am in the process of choosing between "A Red Death" and "White Butterfly" as the next Easy Rawlins mystery to read. I recommend this book to anyone who is at all interested.

Devil in a Blue Dress Mentions in Our Blog

9 Authors Who Aren't Scared of the Dark
Published by Ashly Moore Sheldon • February 26, 2020

Here's the last in our Black History Month series, featuring great black writers from four genres. The publishing industry is sorely lacking in diversity, so it is important to shine a light on authors of color. This week, we feature Horror and Mystery. Here are nine writers who offer scary, thrilling, addictive reads.