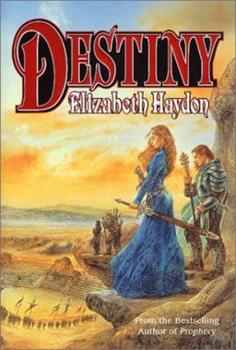 Destiny: Child of the Sky

(Book #3 in the Symphony of Ages Series)

To stand against the F'dor - an ancient, vile being intent on destroying the world - a fellowship has been forged: Rhapsody, a Singer of great talent and beauty; Achmed, an assassin with unearthly talents; and Grunthor, a giant of jolly disposition and lethal skill with weapons.Driven by prophetic visions, the three know that time is running short, know that they must find their elusive enemy before his darkness consumes them all. But after their...

Excellent and full of content...I love the whole story, yet this book seals the fate of the three.

Published by Marcellus Ari , 2 years ago
There aren't any negative comments

Published by Thriftbooks.com User , 20 years ago
What Elizabeth Haydon can do with a series let alone a book is just captivating. Destiny was easily the best with Prophecy and Rhapsody following. It'd take me pages to just talk about the rest of the series so I'll focus on Destiny.Destiny picks up essentially where we left off with Meridion and his main goal in hand but with major subplots. Namely between the three and the F'Dor, Rhapsody and Ashe. Be warned the plot between Rhapsody and Ashe will leave you screaming until its settled. The shock of who the F'Dor is, is also another thing. I could say more giving the plot away but I'll just say this Haydon is best at mysteries and in Destiny she reveals them all. In fact after finishing Destiny I'm thinking of buying Prophecy to read over again and see what I missed.I know I'm rambling. But here it is Destiny is just like the scariest rollercoaster you've ever been on, except if you love rollercoasters you know it was the best. The book has everything a great book should have characters that feel hate, contempt, prejudice, rage. Only to next time around feel love, sadness, joy, and happyness. Meanwhile the plot the characters are so fluidly moved through twists and turns making the ending unpredictible. Lots of great moments especially near the end. But the biggest thing I would say of the book is the mysteries. Haydon has mysteries going until the last page. Thinking on it now I know I missed somethings. Anyway great book, great series if you like fantasy and Sci-Fi (which this book is 'messing with time') this is a must read series. I'd love to read more books from Haydon on the three.

Excellent finale to this great series

Published by Thriftbooks.com User , 20 years ago
The final battle between F?Dor and the triad that leads the opposition (Rhapsody, Achmed, and Grunthor) seems eminent. Though the intrepid trio has defeated F?Dor in the recent past, history cannot guarantee final victory. Grunthor trains his army for the omega confrontation while Rhapsody and Achmed search the countryside for F?Dor?s ?children? to perhaps enable a backdoor to the malevolent being. The threesome understands that no one can be trusted except one another as F?Dor can reach inside to exploit the evil that every person contains. As Rhapsody, Achmed, and Grunthor step closer to the conclusive war, each one of them doubts that they are the saviors that are mentioned in the PROPHECY, wondering if they are still manipulated by the F?Dor to bring about the end of the world. DESTINY completes Elizabeth Haydon?s incredibly action-packed yet authentic feeling fantasy trilogy (see RHAPSODY and PROPHECY), which may be the genre?s best miniseries of the past decade. The story line is fascinating due to the belief that this realm is real, the events seem as if they truly happened, and the key characters feel genuine all leading to the audience wanting more from Haydon?s world. As fans and critics rhapsodize about this author?s awesome talent, it is easy to make a prophecy that Ms. Haydon is destined to greatness if she has not already obtained the mantle.Harriet Klausner

Truly deserving of the rating

Published by Thriftbooks.com User , 20 years ago
I admit it, I am a tough grader [college English professor] and I don't think I've ever written a review and given a 5 before, not even on Rhapsody and Prophecy. I thought those were two of the best books in the fantasy genre I had read in a decade or more, but still couldn't bear to break a 4. But with Destiny, this book really deserves it. I wholeheartedly assign it a 5 and urge anyone who loves mystery, riddles, suspense, action and the poignancy and nobility of spirit to lose yourself in this book. It has been a joy watching the characters of the Three evolve. Perhaps that should be two of the Three--Grunthor, the beloved Sergeant Major/cannibal, remains his lovable stalwart self. Rhapsody has grown from a clueless girl into a strong and capable woman, and Achmed had learned that there are things that matter in the world, something he didn't know when the trilogy began.The Meridion tie-in is perhaps the most amazing aspect of the book. Incredibly well written.Finally, let me say that Haydon is an evil genius. She has a penchant for tweaking the nose of the genre, by putting it through twists and turns and flipping it upside down, resulting in a completely fresh angle. She rehabilitates one character, moves that character along, and sets it up for what you know surely is death, then snatches the scene away to another character It's master-level work, worthy of Martin or Tolkien wrapped up with Agatha Christie.Simply put, do yourself a favor: read this series, because it ends with a BANG!

An absolutely AMAZING end to an astounding trilogy

Published by Thriftbooks.com User , 20 years ago
This may be a first: a big epic fantasy series that has a trilogy conclude in a highly satisfying way, while leaving more of the history to be explored. I am a longtime fantasy junkie, and have watched in dismay as Robert Jordan wanders aimlessly in directions that do not seem as if they will intersect in his lifetime; George Martin is taking forever to write a 3, er 4, er 6 book saga, and Terry Goodkind is making no longer making sense.Here, however, is a conclusion to Haydon's wonderful trilogy begun two years ago with RHAPSODY, improved upon in PROPHECY, and brought to a brilliant conclusion with DESTINY. This volume is much more gripping than the first two, with multiple plotlines converging into some wonderful scenes. It is also the least predictable fantasy I have ever read. The plot breaks from where you think it is going at a 90 degree angle, fast enough to give you whiplash.I was completely enthralled with the mystery aspect of this trilofy as well. I am going back through the first two books now, picking up the clues to the F'dor's identity, surely one of the most anticipated revelations in recent fantasy.All I can say is if you do not check out this trilogy you are missing something extraordinary--not the least aspect of which is that the author knows when to bring the story line to a riveting stop. I can only hope that she will go on and write more in this fantastic series, either with the surviving characters or some of the historical ones we've heard about under her masterful storytelling.

Published by Thriftbooks.com User , 20 years ago
A fantasy series that actually ends. Phenomenal. As in the first books, Haydon's characters are finely drawn, her places are unique and real. It has been decades since I was this involved in the lives of people on paper. I've recommended these books to people who don't normally read fantasy. This conclusion is twisted and gripping. Just when you think that it will turn out like you might predict, it takes some unexpected turns. Assassinations are prevented by murder, friendships end in sacrifice, and you're still never sure because the good guys are so bad, and the bad guys are just worse. The scope of the novel widens, and you get to see more of everybody. The final thing I have to say is that it left me like Tolkein's books; wanting to know more about what came before this world, wanting to know more about the different peoples I was introduced to. This trilogy may be over, but Haydon has really built a world here, and I am only more interested than ever to see what other stories she has to tell about it.
Copyright © 2020 Thriftbooks.com Terms of Use | Privacy Policy | Do Not Sell My Personal Information | Accessibility Statement
ThriftBooks® and the ThriftBooks® logo are registered trademarks of Thrift Books Global, LLC