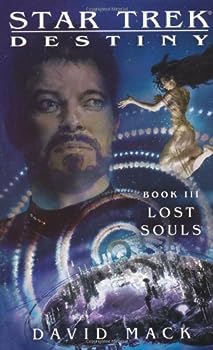 This description may be from another edition of this product. The soldiers of Armageddon are on the march, laying waste to worlds in their passage. An audacious plan could stop them forever, but it carries risks that one starship captain is unwilling to take....

Now THIS is a Star Trek trilogy!

Published by Thriftbooks.com User , 12 years ago
I won't bother rehashing what goes on in this or any books in the trilogy, as others have already done so. I admit I approached the trilogy with trepidation, given many of the novels preceding it starting with "Death in Winter" were, frankly, very bad. The "Destiny" trilogy redeemed all that and more. I've been reading Trek books for years and I can honestly say this is the first time I've felt truly invested emotionally in the outcome of one. The ending was very Roddenberry, peaceful and at the same time, wonderfully awesome. Learning the origins and the Borg and seeing their end arrive (sadly, they had become cliche from overuse) were interesting and poignant moments; the book leaves you with a sense of hope for the future of Trek, and the novels preceding it never could.

Star Trek at its absolute best!

Published by Thriftbooks.com User , 12 years ago
The Destiny trilogy is the pinnacle of ST novels, combining a suspenful storyline including a REAL Federation-wide threat(for the first time ever in ST literature, no character is safe!) with fantastic characterization for established and new characters. Ever since the Star Trek novel line re-alligned in 2000-2001, the novels have kept a consistant continuity (which still allows readers to "jump in" in jus about every novel, without confusion), and the Destiny trilogy is the culmination of those last few years of stories. Don't be alarmed, though. You don't need to read every Trek novel out there to understand it all - far from it: These books provide ALL the information you'd need. In closing, the entire trilogy is a top-notch work from Star Trek's greatest novelist today!

Published by Thriftbooks.com User , 12 years ago
I've been selective over the past few years about the new Trek novels I read, and I usually shy away from anything over one novel's worth, but I decided at Shore Leave this year that I would give David Mack's series a try. Glad I did! I suspect that *because* I have not read every single other new Trek novel out there, I may have an advantage over those who have, in that there may be contradictory details I'm thankfully missing. But it works for me, so I'm not complaining! One thing I DID do was make sure I had all three novels in hand before I started. Helped with my short attention span, you see, and now that all three novels are available, this approach is recommended for others with this trouble. In any case, this series was satisfying, believeable, edgy, emotional, and fun, all rolled into one. There was closure - as well as hope for the future - and while some have expressed a "what-could possibly be next for the Federation?" concern, I have every confidence writers like David Mack will easily take up the call to introduce new threats. Meantime, the end of this series sees the Federation in pretty bad shape (though, again I say, not without much sweet hope for the future), so I imagine the bent will be towards rebuilding and the conflict such will inspire. Plus, okay, I laughed at "chasing a fart through a bag of nails" which has, at various harrowing times in my life, perfectly described how I must have looked to others. All in all, good stuff. Go. Read.

Published by Thriftbooks.com User , 13 years ago
This was, quite frankly, one of the best written Star trek books I have ever read. David was able to accurately capture the voices and relational dynamics of some of the most beloved Star Trek Characters. I could not put it down. This man ranks up there with the likes of Peter David and Keith R.A. Decandido. Bravo sir. I look forward to your next book and the next installment of this story.

Where TNG should have gone

Published by Thriftbooks.com User , 13 years ago
No book (or series) is ever perfect. But they can reach for it and come awfully close as this series does. What a fantastic and completely satisfying journey. It's not artsy as some Trek books try to be, it's not over intellectual either. To me, it's real; or as real as you can get in a futuristic Sci-Fi universe. The "chasing a fart through a bag of nails" line had me rolling on the floor. Not because I am immature (okay, maybe a little) but because it was so unexpected in Trek. (However, being a military man, there were a few things that grated on my nerves such as Capt. Dax's constant use of Prototype transphasic superduper uber slipstreamanator thingy; okay already, I get that it's a prototype.) And this is the jewel of the series, the unexpected. In a television series that never mentioned or shown a character needing to use the bathroom, giving my favorite character's a dose of humanity was a welcome treat. People want to complain that Picard acted out of character. I disagree. Like every other character sewn seamlessly from other book series, Picard has finally shown the emotion we saw in First Contact. He has never dealt with the pain and turmoil from not one but two assimilations by the Borg as well as the death of his brother and nephew, the fear of the impending birth of his son compiled with the emotions the utter destruction wrought by a vengeful Borg are roaring through him. He is a strong character, but even the strongest can break. Since the cats out of the bag, some seem to find the origins of the Borg, which is partially the blame of humanity, an unfit `beginning'. How? Through TNG and Voyager, through the video game Star Trek: Legacy, through the books, we capture glimpses of but never the whole story. Often the largest, most profound things are started by a simple choice, one small decision. I love that picture, which this story has painted with aplomb.
Copyright © 2020 Thriftbooks.com Terms of Use | Privacy Policy | Do Not Sell My Personal Information | Accessibility Statement
ThriftBooks® and the ThriftBooks® logo are registered trademarks of Thrift Books Global, LLC