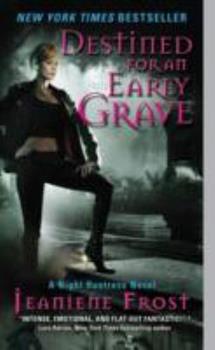 Destined for an Early Grave

(Book #4 in the Night Huntress Series)

Her deadly dreams leave her in grave danger Since half-vampire Cat Crawfield and her undead lover Bones met six years ago, they've fought against the rogue undead, battled a vengeful Master vampire, and pledged their devotion with a blood bond. Now it's time for a vacation. But their hopes for a perfect Paris holiday are dashed when Cat awakes one night in terror. She's having visions of a vampire named Gregor who's more powerful than Bones and has...

Destined for an Early Grave by Jeaniene Frost

Published by Thriftbooks.com User , 12 years ago
Cat and Bones are back in book four of Jeaniene Frost's Night Huntress series. In "Destined for an Early Grave" the two lovers will face their greatest fears and find out just how strong their bond, and their love, can be. This is an action-packed romp with secrets revealed from the past and ends with a new twist on the future. If you're a Cat and Bones fan, you will want to drop everything and RUN to get this one. Cat and Bones are ready to enjoy a leisurely honeymoon filled with sex and well, more sex. And they get that--almost, with the exception of Cat's dreams. Her dreams are of a blond vamp who 'feels' just as powerful as Bones and he keeps saying she's HIS. When they arrive to Paris, Cat and Bones are unhappy to learn that her dreams have more than a passing resemblance to reality. The blond vamp is the one called the Dreamsnatcher and he has the power to literally kidnap people while they dream. He is also adamant that Cat is his wife! Now Cat and Bones and their allies will have to step carefully between minion attacks and vampire politics to straighten out this mess. And with BOTH Cat and Bones trying to protect the other...well, it's gonna be a rocky ride. I don't want to give too much of the plot away cause this one's a doozy. The previous book was mostly action and there's a lot of action in this book too, but there's also quite a bit revealed of Cat's past and her emotions and how both of these affect her relationship with Bones. Bones too, suffers from things in his past that impact Cat's ability to trust which drives Bones nearly insane. Their story is better than any soap opera (and way hotter too) and I can hardly wait for the next installment to feed my fix. As usual, Frost's plot and writing are smooth as silk and the interactions between Cat and Bones sizzle the pages. For me, at its heart this book is about trust. Cat and Bones struggle with the balance of power and trust issues throughout this book. I think more of their inner selves are revealed in "Destined for an Early Grave" than any of Jeaniene Frost's earlier books in this series. I can't get enough of these two and I'm ready and willing to follow the fork in their path destined by the book's ending.

This book is definitely a sleep robber

Published by Thriftbooks.com User , 12 years ago
As i write this review i am fighting off just urge to just drop my head on the keyboard from lack of sleep that this book has caused. once you are about a third of the way through you cant put it down till you find resolve! The plot was unexpected and had several twisted which i enjoyed immensely. You absolutely cannot pass this book up if you are familair with the series, and those of you who are even a little bit into urban fantasy, vampires, or really strong lead female characters than i strongly recommend this series to you. the books have only gotten more intense and the storylines more unique and action packed. just please go get it now! In Destined for an Early Grave we find Cat is being persued by a master vampire who claims that she is his blood bound wife, before Bones came along(which according to vampire law her and bones' marriage means crap, and she belongs to this other man). Of course Cat thinks its mad cause she doesnt even know the guy....but soon you come to find out there is truth to these claims. She feels as though she has seen him before and he is in her dreams everyday.

Published by Thriftbooks.com User , 12 years ago
I read all of the Night Huntress series and this latest one did not disappoint! After Graves' End, you think Cat and Bones are finally married and skipping their way into the sunset but that isn't what happens. Another vampire claims to have married Cat first and insists that she was in love with him and had her memory erased by Mencheres. Having escaped from Menchere's imprisonment, Gregor demands that she be returned to him, causing Bones to declare war on him and all of his allies. In the midst of all of this Cat and Bones' relationship is tested like never before and Cat finds herself at a cross-roads as she tries to sort the truth from the lies and fights to keep everyone she loves alive. The book tugs at your heartstrings on so many levels, from the anguish that Cat feels towards Bones and vice versa, to her unique connection with Vlad, Justina, Mencheres, Gregor, and even Marie Latveau. Usually series books drag alittle by the 3rd or 4th book and you feel like the author is using the same theme, just re-hashed a little and re-packaged but with this series you definitely get a progression of the issues facing the characters and their growth. All of this character development happens during several action-packed conflict points, none of which threaten to take over the book, unlike other similar series (like Kelley Armstrong's Women of the Otherworld series) where the action tends to dominate over the relationships. It's a fast read with lots of sick humor, emotional dialogue, and action that kept me reading way past my bedtime. I can't wait for book 5, which sadly comes out 2011.

The Red Reaper - "Destined for an Early Grave" Review!

Published by Thriftbooks.com User , 12 years ago
So, I just finished "Destined for an Early Grave" by Jeaniene Frost, and all I can say is.. Oh my gosh! I wish I had more friends who read this series so I would have someone to talk to about this book. Man.. just.. whoa! When I finished the last page, I squeaked. I kid you not, it's that kind of story. This would have to be the best book I've read all year, but then Jeaniene Frost hasn't disappointed me yet! So! In this book - Cat, Bones, and the crew are back, and this time the bad guy is stronger than they could have imagined, with a claim that has Cat and Bones worried. The vampire Gregor, called the Dreamsnatcher, is claiming to be married to Cat under vampire law, since she was sixteen. Mencheres arrives to explain to Cat that the memories of her month spent with Gregor have been blocked, and only if she agrees to go to Gregor and have him bring her memories back will she know the truth of their supposed marriage. Cat and Bones aren't taking the situation well, and tempers are rising. Are Cat and Gregor really married? And if she gets her memories back, will she choose Bones or Gregor? As I said, I loved this book. Cat is such a great heroine, stubborn but strong. And Bones.. whew, I'd take him any day! And of course I love their friends- Mencheres, Spade, Rodney, Vlad, and the new addition - Fabian. In the beginning, part of me wanted Gregor to be somewhat of a good guy, maybe to make the decision just a little harder, give him some redeeming qualities, maybe. But as the book wore on, no more. I wanted Cat and Bones, and all their people, to survive. I wish I could get into the ending, the amazing twists, the heart wrenching moves.. Oh, dear. All I can do is suggest that everyone read this, and of course the books before it. Frost already has a few books planned out, Cat and Bones will have at least three more, and Spade and Mencheres will each have their own book. I can't wait! I give this book a five out of five. I couldn't put it down, and I know I will keep going back to it over and over. It has everything I wanted and needed, romance, drama, emotional ties to amazing characters, and the thrill of seeing the characters fight for their lives, and their love. Make sure you all check out "Destined for an Early Grave" by Jeaniene Frost!

Finally!! Something that kept the pages turning!

Published by Thriftbooks.com User , 12 years ago
In my opinion this is the best in this series! I was wondering how Ms. Frost was going to mix it up and create new conflict after the last book. She succeeded brilliantly! I devoured the whole book in less than 8 hours. I simply couldn't put it down! I adore her witty banter which never fails to drag an audible laugh from me. The romantic aspect is addictive. You can't help but fall in love with Cat and Bones. And Cat is among my favorite heroines. She's tough and scarcastic yet still vulnerable enough to pull your heart strings. All in all, Ms.Frost's writing will grab you by the front of your shirt and drag into the world she builds and not let you go until the end....and still leave you wishing for more. I'll be sure to reserve my copy of THE FIRST DROP OF CRIMSON in January! Horay for the first of the NIGHT HUNTRESS WORLD books!
Trustpilot
Copyright © 2022 Thriftbooks.com Terms of Use | Privacy Policy | Do Not Sell My Personal Information | Accessibility Statement
ThriftBooks® and the ThriftBooks® logo are registered trademarks of Thrift Books Global, LLC