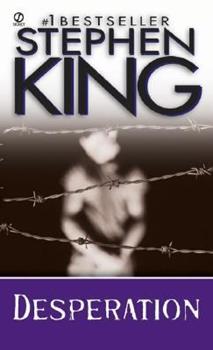 There's a place alone Interstate 50 that some call the loneliest place on Earth. It's not a very nice place to live. It's an even worse place to die. It's known as Desperation, Nevada...

Published by David , 6 months ago
The copy I received had significant water damage, mold on the pages, and some sort of dried sauce on the back cover. So I have no idea if the book is any good, the copy wasn't readable.

Blown away by the quality!

Published by Abby L. , 1 year ago
I ordered an "Acceptable" copy, and after hearing reviews say that the book didn't come with a dust jacket, I was fully prepared to get a copy that was missing the dust jacket. HOWEVER, the book I received not only came with a fully intact dust jacket, but it was also in much, much better condition than I had expected for a so-called "acceptable" copy. No tears in the dust jacket, no damage to the spine, no stains/torn pages, and no bent pages! Aside from some minor scuffing to the dust jacket on the bottom of the spine, the copy I received was pristine. On top of that, I received my book in 2 days, just in time for Christmas! I am beyond thrilled with my purchase!! As for the story itself, this is one of my favorite Stephen King books, and I could not put it down when I first read it. Definitely read the book preview if you're still unsure about buying the book, it has such a great opening.

Published by Tammy , 1 year ago
Haven't read yet but I will change my review when I am done reading it.

Published by Greg , 2 years ago
Reading this book now. It is another outstanding book by Stephen King. What a great read.

Are you desperate for a good Stephen King shocker?

Published by Horror crazy , 2 years ago
If you are, Desperation is a book you’ll love! A bizarre, gory, terrifying supernatural tale with extremely strong characters, a creepy, sinister villain, and King’s very own wicked plotting. Prepare to be creeped out!

Published by Berni , 3 years ago
Every king fan will enjoy this thriller horror

Follow the adventures of the "Collie Entragian Survival Society"

Published by Thriftbooks.com User , 15 years ago
1996 must have been a heady year for Stephen King--coming off the critical and commercial success of his excellent six part serial, The Green Mile, he followed up with a pair of hard hitting, well-written novels, Desperation and The Regulators. Desperation was clearly his best work since Misery. The Regulators, written under his pseudonym, Richard Bachman, was less successful, but pleasurable reading nonetheless. The Regulators is King's version of the classic Twilight Zone adaptation of Jerome Bixby's It's a Good Life. The denizens of Poplar Street, located in the small town of Wentworth, Ohio, find themselves sealed off from the rest of the world, trapped in a pocket universe created by the imaginings of an autistic child who has been possessed by a demon. Neighbors must band together to fight off killing machines that seem to have sprung from the television screen. Desperation features many of the same characters who populated The Regulators, albeit in altered form. Desperation, a small mining town off Route 50 in Nevada, is also under attack by a demon, but here the devastation is far worse. Instead of tormenting a few folks, the demon, after destroying most of the town, has taken to pulling people off the highway to satisfy its perverse longings. Again, a disparate group of people must cooperate to save their lives. The contrast between these books is startling--if you never noticed the difference between King's and Bachman's styles, reading these two books back to back will be a real eye opener. Bachman creates the aura of immediacy, but we never really get to know his characters. King, on the other hand, hews to his tradition of giving us characters we really care about, people we would like to get to know. Bachman's style is also more disjointed than King's--he tends to jump about, giving the reader bits and pieces as he goes along, while King adheres to a more linear style of storytelling. Desperation is the superior book. The small asides that link the two books seem natural in Desperation, but more forced in The Regulators. King also does more with the plot elements than does Bachman. Desperation is vintage King--you can feel his energy and confidence from the first sentence. The opening scene sets the pace for the entire book, as two characters are pulled over by a policeman. A nerve-wracking experience to be sure, but one which we are all familiar with. King then takes this ordinary situation and gives it a little twist. As it dawns on the couple that they've been pulled over by Lou Ford's even crazier cousin, they realize they might be in trouble. Little do they know that their problems, and the reader's enjoyment, are only beginning. Reading these books together should be a lot of fun for most folks. In these novels, King indirectly provides insight into the creative process, proving that it's not where you get your ideas, but how you use them that counts. With the publication of The Green Mile, Desperat

Published by Thriftbooks.com User , 19 years ago
I had pretty much given up on Stephen King after killer books such as, The Dark Half, Needful Things, and so on. I remember when desperation came out and not thinking more than once about, never reading it. I happened to be staring at the cover (hardcover edition) and just couldn't take my eyes off of it: spooky feeling or something? I came to the conclusion that out of all the book cover art on all of King's work, Desperation was my favorite, so why not read it? Good choice.' The characters are all more than real, your driven into this very weird nightmare King was woven, and it's weird in a very bizarre, uneasy kind of way, making it as scary as the old King masterpieces. One last thing ... I'm typing this right now during the biggest blackout to ever hit the East Coast, August 14, 2003, and the power blitzed out from Canada, Through New York, as far west as Ohio (that's me), and it went black at 4:10pm eastern time-I was just finishing the last page of this book at the very second and it still has me freaked out! An exact incident happened to me during a very powerful storm that knocked out power lines for a day back in 1995 and at that very moment I was reading Needful Things! I am CONVINCED that Stephen King is BAD luck in the summer time. I'll stick to the other 3 seasons for Stephen from now on! 5 STAR VERY WEIRD RATING FROM SCRAGGY'S TOMB OF HORROR, USA.

Published by Thriftbooks.com User , 21 years ago
The thing I noticed the first time I picked up a Stephen King book was his uncanny knack for detail. He could take a simple thing and go on about it for a paragraph and make it interesting. This is one of the key elements in "Desperation," a novel that thrives on its details. If it wasn't for the incredible descriptions of the Tak character, we wouldn't get that utterly grotesque mental picture of a creature that causes the bodies it inhabits to, quite literally, fall apart. Blood seeps from every orafice on the body like it serves as nothing more than a river system of open wounds. Tak is one mean SOB, and he's also one of King's most memorable villains. And of course, in order to combat a villain of Tak's stature, you need a good hero, or a group of good heroes. We have them in "Desperation." The middle-aged writer traveling the country, the young channel to God... Each character is interesting and well written, as King's character's usually are."Desperation" is mostly about Tak, and the power that he mysteriously holds over a small desert town full of dead bodies, and coyotes that obey his every command. The people who end up in this dead end town are nothing more than meat on a slab to this mischievious force, whom the devil would more than likely take in as a son or a brother. Tak is a merciless force of the paranormal that is hard to understand, but that is okay, but evil in itself can be a difficult concept. Heck, humanity can be a difficult concept, but that's what makes it interesting. Not really knowing what Tak wants even while we're seeing things from his point of view makes for some of the novels most interesting passages.Maybe it takes a reader that really gets inside and becomes part of the story, but I thoroughly enjoyed "Desperation," and being the nut I am for perverted jokes, I always laughed at King's little innuendoes. He must be a great guy to hang out with at parties.

Stephen King at His Best

Published by Thriftbooks.com User , 22 years ago
Last fall, I had a little time on my hands to kill and I decided to stop by the library. I picked up the Stephen King book Hearts in Atlantis. I brought it home and finished reading it. I was intrigued. However, I was perplexed-this was my first Stephen King book-and I didn't find it to be all that horrifying. Anyway, I read Pet Sematary, just to be sure, and halfway through I was hooked. In October, at Border's Books and Music, I purchased Desperation. I read a few pages when I got home, and I found myself unable to put it down. This is by far his best book I have read so far. The setting is in the lonely town of Desperation, Nevada. Entragian, or Tak, the evil spirit who has taken his body, is out to rule the world.Steve Ames and Cynthia stumble upon a horrific scene as they follow Steve's boss into Desperation. The Carvers, Mary Jackson, Jonny Marinville, and Steve Ames and Cynthia are now trapped, and Tak is getting angrier by the minute. How will they survive? I strongly reccomend this book to anyone with a strong stomach. (You'll know why when you read it) There's a twist and turn every other page. You'll find yourself reading this book all night!You won't be able to put it down! Guarenteed!

LET THE BATTLE BETWEEN GOOD AND EVIL BEGIN

Published by Thriftbooks.com User , 22 years ago
I began this book on February 24 and finished it on March 1 (yes, one week). I have only read two other Stephen King books: The Green Mile and Cycle of the Werewolf. I gave both of them a "Good, but..." review. Then I read Desperation, and was amazed. It sounded pretty boring at first, but as I kept on reading, I didn't want to stop. Before I knew it, I was done with it. Now right after I read a book or see a movie, I like it or hate it. But as time passes, I realize how much I like (or hate) it. So I waited a week or so, and I realized how much I loved it. The characters are so well introduced, and the hatred that builds inside you for the antagonist is incredible. Now I am extremely afraid to go to any western state. I swear, if I see so much as a vulture, a coyote, a spider, or a mine, I will freak out and run for my dear life. I guarantee to anyone who reads this book: you will like it. If you don't, you seriously need to get a life. Tak!
Trustpilot
Copyright © 2022 Thriftbooks.com Terms of Use | Privacy Policy | Do Not Sell My Personal Information | Cookie Preferences | Accessibility Statement
ThriftBooks® and the ThriftBooks® logo are registered trademarks of Thrift Books Global, LLC