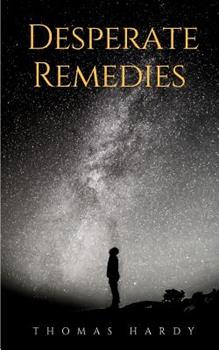 Desperate Remedies is the second novel by Thomas Hardy, albeit the first to be published. It was released anonymously by Tinsley Brothers in 1871. In Desperate Remedies a young woman, Cytherea Graye, is forced by poverty to accept a post as lady's maid to the eccentric Miss Aldclyffe, the woman whom her father had loved but had been unable to marry. Cytherea loves a young architect, Edward Springrove, but Miss Adclyffe's machinations, the discovery...

Published by Thriftbooks.com User , 11 years ago
Desperate Remedies, Thomas Hardy's first published novel, is far from his best but surprisingly quite good and, indeed, somewhat underrated. Despite some limitations - I hesitate to call them "faults" - that Hardy later overcame, it is an engaging, suspenseful read that holds up rather well after almost a century and a half. It is a novel by a young beginning writer full of promise; though it infamously got several very bad reviews, at least a few critics rightly saw that its author could someday produce greatness. Fans and scholars will delight in these budding elements and much else related to Hardy in embryo, while the significant differences from his other novels may even attract those who do not normally like him. Hardy later improved on all the book's strengths, but there are, to its benefit, several similarities to his great later works. Not least is a strong sense of place, perhaps Hardy's most important and characteristic novelistic asset. He is rightly known for vivid, often detailed, and sometimes strikingly lyrical descriptions of settings and for moving them beyond mere background to become an integral part of the story. This last is not reached here, but the descriptions are well above the norm, and we can see Hardy's progress toward works where setting is so important that it almost becomes a character. The official launching of Wessex - the part-real, part-dream country, based on his native Southwest England, that Hardy made world famous - did not occur until his fourth published novel, but he was clearly already working toward it. This is not a proto-Wessex novel in the sense that his next two books are, but the setting is a rural England based on Hardy's own area and quite memorably sketched. The portrait of the heroine, Cytherea, is also striking - the first of Hardy's many great heroines. She is skillfully and realistically drawn, quickly gaining sympathy and interest; we feel for and with her vividly lifelike character. Like Hardy's more famous heroines, she is to a large degree idealized - incredibly beautiful, intelligent, and educated yet innocent and naïve. She is notably strong and independent for a female literary character of the era, clearly showing that Hardy had a far higher view of women than most people of his time, especially men. However, also like his more famous heroines, she is not perfect but must fight a tendency to be overly trusting and a dependent streak. The many feminists interested in Hardy's work will find much to fascinate them in this early depiction. The author's preface admits that, even after Hardy became acclaimed, the book was praised almost exclusively for this character. He as usual sells himself short, but it is certainly true that characterization is not the book's strength. Hardy later improved his characterization to the point of mastery, creating some of the era's most memorable characters, but here Cytherea stands well above the rest of the book's cast. Her lover Edward Springrove

Not your typical Hardy, which is almost a good thing

Published by Thriftbooks.com User , 19 years ago
I think any Literature course covering Thomas Hardy should include a prescription for Prozac along with the syllabus. Hardy's novels are generally brilliant, beautiful, and throughly depressing. Then you come to come to Hardy's first published novel "Desperate Remedies". Definitely "Hardy-Lite" this novel is a sensational, melodramatic story which is very different from the bulk of Hardy's more recognized prose. the story centers around young Cytherea Graye, who becomes a servant to Miss Auclyffe, a woman with a troubled past. There, she encounters Aeneas Manston, the incredibly handsome and charming steward of Miss Auclyffe, and also a man with a dark secret. He falls hopelessly in love with the beautiful girl and sets out to win her. But alas, Cytherea is already in love with the kind Edward Springrove. Who will ultimately win her? What is the mysterious connection between the steward Manston and Miss Auclyffe? When will people learn not to set fires next to their thatched houses??I really enjoyed this novel, though at times the melodrama was so thick it was humorous. It reminded me of "Jane Eyre" in many ways, though I felt it was more entertaining than that supposedly great english novel. A lot of twists and turns, very well-written, and an ending very different from your usual Hardy downers. Classic literature? Maybe not, but a fun read and a glimpse of England's greatest novelist before he had mastered his craft.
Copyright © 2020 Thriftbooks.com Terms of Use | Privacy Policy | Do Not Sell My Personal Information | Accessibility Statement
ThriftBooks® and the ThriftBooks® logo are registered trademarks of Thrift Books Global, LLC