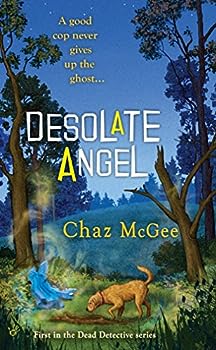 This description may be from another edition of this product. First in a series that takes readers into a new dimension in detective stories. He was once a second-rate cop, a mediocre husband, and an absent father. But ever since he was killed in a drug bust...

Published by Thriftbooks.com User , 12 years ago
This is a book that will stick with you. Kevin Fahey was a lousy cop and an even lousier husband & father. As a ghost he has begun to see what he missed in life. He meets the ghost of a victim whose killer he thought he sent to prison, only to realize that because of his & his partner's shoddy work an innocent man was sent to prison. By trying to find the real killer he sees a chance to redeem himself somewhat in his own eyes. This story will make you think about your own life and what it might be like to see it from Kevin's side and know you don't get a "do-over". Good to have you back, Katy!! We've missed you!

Published by Thriftbooks.com User , 12 years ago
There are times when you find a book that you wish you had written, and this is one of those rare times. This well thought out and passionately written ghost story is one that will be a part of my permanent library and will be recommended to friends who like supernatural characters that read like flesh and blood ones, full of love and emotion, regret and remorse. This novel is a must read, and I will be reading the entire series. Thank you for writing about the dearly departed in such a way that the person remains part of the land of the living! Mari Sloan, author of "Beaufort Falls"

Published by Thriftbooks.com User , 12 years ago
After reading only a few pages of DESOLATE ANGEL, which I thought was a debut novel, I was sufficiently impressed to go looking for information about the author. I discovered that Chaz McGee is a pseudonym for Katy Munger, author of the Casey Jones series and (as Gallagher Gray) the Hubbert and Lil series. Katy has been absent from the publishing world for a while, but she has returned in style with the debut of this great new series and, coming in September, another Casey Jones mystery titled BAD MOON ON THE RISE. Kevin Fahey, narrator of DESOLATE ANGEL, is indeed a dead police detective, who now haunts the streets of his town, unable to connect with either the living or the dead - until the spirit of a murdered girl, Alissa, appears to lead him to the scene of a fresh killing. Alissa was the victim in an old case Kevin worked on. The girl's boyfriend was arrested and convicted, and Kevin thought he'd done his job. But as he looks at the new victim, whose corpse bears the same unmistakable marks found on Alissa's body, Kevin realizes that his heavy drinking and laziness on the job led to the imprisonment of an innocent man. The real killer is still free, and he has taken another young woman's life. Kevin can go anywhere, he can see and hear everything, he can sense things about people that the living overlook, but he can't communicate with Maggie Gunn, the detective on the new murder case. As he tries in his oblique way to guide Maggie in the right direction and protect her from threats to her own life as she solves both old and new murders, Kevin finds after death the purpose that was missing in his life. He becomes Maggie's shadow partner as well as her protector, determined to redeem himself by setting right all the cases he mishandled in the wasted years of his career. This is a wonderful book with a unique and appealing hero. I loved it.

Published by Thriftbooks.com User , 12 years ago
Heaven does not want him and Hell is not calling either. In life Kevin Fahey was a lousy cheating husband and an absentee father; these were his better traits. As a cop he failed to solve most of his cases. As a spirit wandering his town, he believes he is still on earth to earn redemption though he has no earthly idea how. One day the ghost of Alissa Hayes appears and leads him to the corpse of a woman who was positioned in the exact manner of her murder that he solved. Kevin now knows he was so drunk and incompetent he let an innocent young man get sent to prison .Kevin is drawn to the lead detective on the case who shine with a pure light; Maggie Gunn quickly connects the homicide of Alissa to that of Victoria Meeks. Fahey is Maggie's persistent yet invisible companion; he smells evil while she senses it. Maggie figures out who the killer is, but lacks evidence for a conviction. She, as does Fahey, knows he must be taken down because he will torture and slowly kill others. Although Maggie can not sense Fahey's presence, somehow she feels connected to him. He intends to keep her on the right road so a tragedy can be averted. As a roaming ghost, Fahey is a much better person than he was as a living being. He sees the beauty of nature, the joy in loving relationships of all kinds, and bitterly regrets how he lived his life. He needs to make reparations and is elated to finally have found a way to do so. Fahey feels he is doing a higher calling and embraces this with a fervor he lacked when he breathed. His feelings for Maggie are not quite defined at this time but emit an interesting aura as he obviously cares what happens to her; a first for him. The investigation is top rate as Chaz McGee has written a mesmerizing paranormal police procedural. Harriet Klausner
Copyright © 2020 Thriftbooks.com Terms of Use | Privacy Policy | Do Not Sell My Personal Information | Accessibility Statement
ThriftBooks® and the ThriftBooks® logo are registered trademarks of Thrift Books Global, LLC