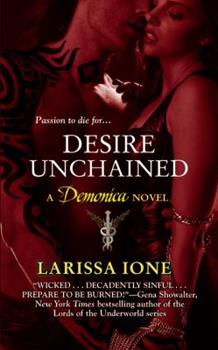 (Book #2 in the Demonica Series)

"Prepare to be burned" (Gena Showalter) by this sexy and suspenseful enemies-to-lovers paranormal romance in the New York Times bestselling Demonica series. Runa Wagner never meant to fall in love with the sexy stranger who seemed to know her every deepest desire. But she couldn't resist the unbelievable passion that burned between them, a passion that died when she discovered his betrayal and found herself forever changed. Now, determined to make...

Published by Thriftbooks.com User , 13 years ago
Second in Larissa Ione's Demonica series, it focuses on a group of Demon brothers who work at Underworld General Hospital, more specifically Shade, a Seminus Demon who's powers help him heal by being able to see into the body at a cellular level. At the beginning of DU, Shade awakens to find himself chained in a dungeon along with the one woman who frightens him more than any other person he's met, one time girlfriend, Runa. Years ago, knowing he could very well fall for Runa, Shade had dumped her and made a run for it. (Operating under a curse, Shade cannot love any woman or suffer the threat of disappearing into nothing- forever living as a shade, always hungry and thirsty but never able to sate his desires. ) In the meantime Runa has become more than the frightened, intimidated human Shade once knew and being locked in a cell with the person who broke her heart is the last thing she wants as well. But when Shade's evil brother forces them into bonding the way only a Seminus Demon can, not only must they escape their captivity, but also each other. Much to their dismay, they find they must face reconciliation- or be forever doomed to a life of pain and misery. This series is sizzling Paranormal Romance at it's best! 4.5 out of 5 from me!

Published by Thriftbooks.com User , 13 years ago
Desire Unchained: A Demonica Novel by Larissa Ione The last thing Shade remembered was climbing in the ambulance with his sister, and then all went black. Upon waking he found himself in a dungeon, chained to wall, but there was someone else in the room... someone he thought he disconnected himself with nearly a year earlier. Oh and it looked like she was about to rip him to shreds, it wasn't his fault she caught him with two other females in bed. Runa wanted revenge on Shade, not for screwing around on her, but for what she was now. Once a human, now a werewolf, Runa had been working with the military and was on a mission to discover more about the demon hospital UG. She had to make a stop to exact her revenge and was captured. Oh man was Shade going to pay. Ummm, not so much, you see the brother Roag that was supposed to be dead, was back in singed flesh and bone and had a pretty nasty plan. A plan that is about to backfire and heat up the blood in both Shade and Runa. Shade is cursed, he can not love another woman. If he does for instance fall in love, he will fade away into a life of torture. When Roag messes with Shade and Runa's minds, Shade thinks killing Runa will save him from the curse. But what will save his heart from falling in love with the woman that wanted to kill him? Desire Unchained by Larissa Ione rocked! It was the hottest book that I've read so far this year! I'm usually not into the BDSM but if it makes sense, Ms. Ione made it tasteful and highly erotic. I loved the teaser at the end, and will make sure to read the next book in the Seminus brothers series. 5 Hearts

Published by Thriftbooks.com User , 13 years ago
As a brief recap, the main setting of the stories centers in Underworld General Hospital, a facility that cares for all manner of demons, vampires and ghoulies. UGH was founded by three brothers Eidolon, Shade and Wraith, who are Seminus demons. Each of the brothers has the same father but different mothers. The reason for this is that at one hundred years of age, Seminus demons reach their final maturation cycle and essentially go though a metamorphosis called the S'genisis that results in them being able to reproduce. If their sexual urges are not satisfied they lose control to the point that they will rape without care because of their intense sexual needs. If they are bonded, it is only their lifemate that can satisfy their enormous sexual requirements. Seminus demons are incubi, these guys have sex on the brain 24 hours a day. They are huge in stature, and have tattoos or 'dermoires' that shimmer and writhe depending on their mood or state of arousal. They also have a unique marking that is specific to the seminus demon on their neck or throat that sort of activates when they are mated. Their have amazing eyes that change color in anger or lust. The sems are just majorly HOT. Shade is the head paramedic at Underworld General and as he wakes up in a dungeon chained to a wall, laying on cold concrete, the last thing he remembers is be called out on an ambulance run with his sister and fellow paramedic Skulk. On the other side of the cell, also chained to the wall is his previous lover Runa who he hasn't seen in over a year. Runa Wagner was a sexually inexperienced human when she became intimately involved with Shade. She fell in love with him only to have her heart broken when she walks in on him in bed with two demons in a very compromising situation. Runa runs away in grief stricken and horrified that night and is attacked by a werewolf and badly injured during the mauling. She nearly dies but is rescued by her brother who is with the military and taken to a secret government instillation where she heals. However, she contracts the lycan infection and becomes a werewolf. Runa is not a happy camper. She blames Shade for her condition because of the events prior to her attack. Runa has also been tasked with infiltrating UGH and passing information to the government agency that was instrumental in saving her life. Shade is surprised to learn from Runa that Ghouls who are harvesting body parts to sell on the underworld black market are their captors. The antagonist in this novel is a demon and a sociopath, he is absolute evil incarnate. I was completely taken by surprise when the identity of their capture and torturer is revealed. I will say that this creature has one maniacal goal and that is the painful destruction of all three brothers Seminus demons are very conflicted by nature, they are demons after all, and have a dark side. However, Eidolon, Shade and Wraith (even though he would never admit it), also possess an inherent goodness. Al

Published by Thriftbooks.com User , 13 years ago
I agree with other reviews that this book is darker than Pleasure Unbound. But to me it was still every bit as good as the first one. Shade is not my favorite brother, Wraith is, so I read this book with a more critical eye, as the first book was all so new, and this book wasn't Wraith's. Yet I still loved it. As I read I kept thinking, what else can happen to these two? They had practically every calamity thrown at them. But as others have said, the genuine bond between the brothers really carried the book. I also love the growing friendship between Wraith and Kynan. Interesting. Runa is an awesome heroine, very strong. I didn't connect that much with Shade, but that's not the author's fault, he simply didn't do it for me. But the storytelling is first-rate, the action fast but not over the top, and overall this series is a total auto-buy for me. In the crowded field of paranormal romance, this series is fresh and very, very involving.

Published by Thriftbooks.com User , 13 years ago
Runa Wagner has wanted revenge on Shade, the Seminus Demon who broke her heart and left her life forever changed. But she never thought she'd end up imprisoned with Shade! Shade is determined to stay away from Runa because he fears she could be the one to trigger his curse... a curse that promises him an eternity of anguish if he falls in love. Shade and Runa will have to face a mountain of obstacles if love stands a chance, however, as deadly foes want them destroyed. DESIRE UNCHAINED is a bit darker than the first book, PLEASURE UNBOUND. While it can be read as a stand alone, the plethora of characters and their various connections may be a bit overwhelming without the solid foundation of the first book. Characters from the first book do play pivotal roles in DESIRE UNCHAINED but Ms. Ione does provide sufficient background history for newcomers. I can't imagine not wanting to read PLEASURE UNBOUND, though! Readers should be warned that Larissa Ione takes readers on a dark journey as Shade's world isn't an easy one. Don't let this deter you from reading DESIRE UNCHAINED, however, as Larissa Ione has so many diabolically clever plot twists in store! It took every inch of my spoiler-loving little heart to not peek at the ending as there were just so many moments I thought Shade and Runa were thoroughly doomed, only to see such a logical and splendid twist appear. World building and character development are critical to the success of DESIRE UNCHAINED and Larissa Ione does a spectacular job with both aspects. Neither is sacrificed for the other but instead each enhances the other. Runa is a likable heroine, and her anger and feelings of betrayal are easily understood. Shade, on the other hand, would be a difficult hero to love but Larissa Ione portrays his dilemma so well that it's hard not to fall in love with him. DESIRE UNCHAINED is a steamy but oh so intricately developed tale that should have cross-genre appeal. Larissa Ione shows that without a doubt she is one of the hottest authors out there. Her combination of a scorching romance, gut wrenching emotional punches, and superb characters all mixed together in a richly developed supernatural fantasy world is perfect. Highly recommended! COURTESY OF CK2S KWIPS AND KRITIQUES
Trustpilot
Copyright © 2022 Thriftbooks.com Terms of Use | Privacy Policy | Do Not Sell or Share My Personal Information | Accessibility Statement
ThriftBooks® and the ThriftBooks® logo are registered trademarks of Thrift Books Global, LLC