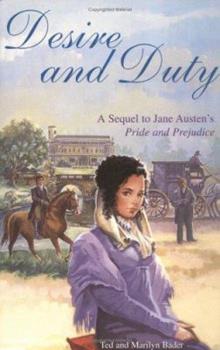 Desire and Duty: A Sequel to Jane Austen's Pride and Prejudice

by Ted Bader and Marilyn Bader

Many critics feel the lively heroine of Pride and Prejudice, Elizabeth Bennet Darcy, is the best characterized female in all of English literature. Jane Austen s story ends with Elizabeth s marriage... This description may be from another edition of this product.

Published by Thriftbooks.com User , 22 years ago
I really enjoyed this book. It was so well written. The kind of book you can't put down. Great!

Published by Thriftbooks.com User , 22 years ago
I found this book fun to read-which is the entire point of sequels anyway. I think some of the respondents for reviews much too serious and nitpicky and even sometimes wrong. I disagree that Mr Darcy would not have revealed the drinking habits of his father in explaining his own behavior. Apparently, modern readers do not appreciate the enormous problem alcoholism created in 18th century England. The characters of Mr Darcy and Elizabeth come alive just like Pride and Prejudice. Elizabeth's personality is difficult to capture , but the authors do an excellent job.

Using it for my High School English Class

Published by Thriftbooks.com User , 23 years ago
I am looking forward to the opportunity to have my Sophmore English Class read this sequel. It will give them a greater appreciation for this type of literature.

A Must Buy! Must Read!

Published by Thriftbooks.com User , 23 years ago
Desire and Duty is a delight. The authors have obviously done their homework well and produced an outstanding sequel to Pride and Prejudice. The story is a joy to read. This sequel is in true Jane Austen style. Desire and Duty continues the story from Pride and Prejudice in exactly the way that Jane Austen would have wanted. I recommend this book to everyone. It should be on every buyer's list and in every library.

Published by Thriftbooks.com User , 24 years ago
I have just finished reading "Desire & Duty." It is one of the best sequels to Jane Austins "Pride & Prejudice" that I have read. "Desire & Duty" is a continuation of the life of Elizabeth & Darcy after their marriage. Also, we get to read about some of our old favorites and what has become of them. I found the characters believable, interesting and entertaining. Therefore making you feel involved in their stories. So many other sequels that I have read (and I have read them all) focused to much on Georgiana Darcy's affairs instead of what happened with Elizabeth & Darcy. Which was after all why I really wanted to read a sequel. Their love story was so strong and intriguing. In "Desire & Duty" the plot does include them as well as Georgiana. As some people here have critizied "Desire & Duty" for the language as not being perfect for the era, get a life!! The authors themselves do not claim to have perfectly imitated Jane Austin's syntax. While there will never be another Jane Austin, "Desire & Duty" is well worth reading!!!!
Trustpilot
Copyright © 2022 Thriftbooks.com Terms of Use | Privacy Policy | Do Not Sell My Personal Information | Cookie Preferences | Accessibility Statement
ThriftBooks® and the ThriftBooks® logo are registered trademarks of Thrift Books Global, LLC