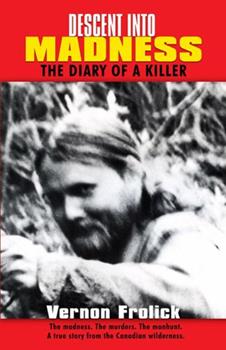 The tangled path of a crazed fugitive leads through the wilds, the courts, and eventually ends on the final trail. The incredible diaries of Michael Oros outline his thoughts, actions, and reactions throughout his 13-year descent into madness. Michael Oros' confiscated diaries, with entries faithfully kept right to the time an Royal Canadian Mounted Police (RCMP) bullet ended his life, chronicle this tragic story, including the murder of RCMP Constable...

Published by Thriftbooks.com User , 14 years ago
A fascinating look at what happens when you mix utopian ideals, a strong will, and too much time in isolation. The story of Michael Oros was published three years before Krakauer's "Into the Wild" and shares many similarities, including a gripping, page-turning quality. Oros dodged the Vietnam draft and headed northward after a stint at a New Mexico commune where drug use was heavy. (Wish we could have learned more about this period, which is only alluded to.) It's not clear how much the period lent to his mental instability. Oros landed in brutally cold northern British Columbia, near the Yukon, and spent about 13 years in the bush eating berries, salmon, moose and building his own cabins from hand-hewn logs. He became a woodsman extraordinare. He envisioned building a "sanity sanctuary" for urbanites, but alienated every would-be business partner with his inflexible ideals and hot temper. He lived alone for a decade under the Northern Lights, with just his dogs to keep him company, and kept thousands of pages of journals, which record his slow descent into madness. It begins one frigid winter night, when he hears voices and laughter taunting him from outside his cabin... Oros eventually became such a misanthrope that every contact with a trapper or even far-off airplane in the sky was interpreted as a vast conspiracy to crush his virtuous example pure living. His delusions eventually have murderous consequences, and the story is equal parts gripping and tragic. I'd classify Oros with the contemporaneous Shiva Lila cult (see "Commune" DVD for brief glimpse) and killer Charles Manson ("In His Own Words"). Not on a scale of murderousness, but in the sense that Oros came preaching love, brotherhood and selflessness but in the end strayed into narcissism and murderous intolerance. A great read.

Published by Thriftbooks.com User , 17 years ago
We don't know how many there are each year ... people who walk away from society and disappear into the bush. They all have their reasons. We never hear about most of these folks. Their futures are unknown. We only learn about the extraordinary ones whose stories later emerge in the news and intrigue us for years afterwards. If you liked reading about Michael Oros' life in the bush, You'd probably also like these other books: 1) "Notes From The Century Before" by Edward Hoagland (a detailed report on the area where Oros lived, written a few years BEFORE he arrived there; 2) "The Secret Life of Ted Kaczynski" by Chris Waits & Harold Shors (details of his 24 years in the Montana backwoods, written by someone who knew him well during all those years); 3) "The Ridgerunner" by Richard Ripley (the story of the fabled "human coyote", a loner who roamed the forests and mountains of northern Idaho for many years; 4) "Cache Lake Country" by John J. Rowlands (first-person account of his life in the Great North Woods, full of info on woodcraft and nature). Someone else has already mentioned "Into the Wild" by Jon Krakauer, which is an absolute "must read" book. There's also a different but somehow appealing book called "Within this Wilderness" by Feenie Ziner, which I enjoyed enough to read a couple of times. It's an account of communal life during the early 1970s on an island in the Inside Passage between Vancouver and mainland BC.

Interesting Look Into The Mind Of Sheslay Free Mike...

Published by Thriftbooks.com User , 20 years ago
I found the book at a local used bookstore and was drawn to it immediately. I am interested in wilderness survival and the fact that Michael Oros was able to survive in the wild for that length of time was reason enough for me to check this book out. I greatly enjoyed the personal look inside Oros' mind that his diary entries afforded. I could relate to alot of what Oros was feeling and it was unfortunate that his hopefull idealism had to come to such a tragic end. It gives alot of insight into the alienation that Oros and alot of people today are feeling when it comes to modern society. The author did a very good job putting it all together into this story.Definitely a good read.

Published by Thriftbooks.com User , 23 years ago
This book is great. I recommend it to anybody who likes the outdoors, hunters, fisherman, etc. It's a good true story.

A true story of an insane man loose in Brittish Columbia

Published by Thriftbooks.com User , 23 years ago
If you have read Jon Krakauers "Into The Wild" you should read this book. It is the true account of a mad man who lived alone in the wilderness of B.C. and his eventual demise.
Trustpilot
Copyright © 2022 Thriftbooks.com Terms of Use | Privacy Policy | Do Not Sell or Share My Personal Information | Accessibility Statement
ThriftBooks® and the ThriftBooks® logo are registered trademarks of Thrift Books Global, LLC