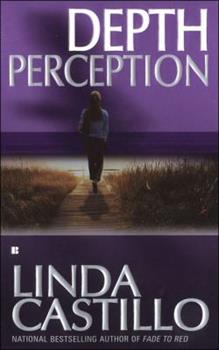 From the bestselling author of Fade to Red. Nat Jennings nearly died the night her family was murdered eight years ago. Now she returns to her sleepy Louisiana hometown, where she teams up with a sexy ex-con to hunt for the merciless killer who nearly destroyed them both. Original.

Published by Thriftbooks.com User , 15 years ago
Depth Perception is a dark, scary and depressing book. It's also very, very good, both in the suspense and the romance department. Considering the book deals with child killings and that two the dead little boys were actually the sons of the hero and heroine, the book can't be anything but dark. Nat Jennings husband and son were killed three years ago, and after becoming the main suspect Nat tried to kill herself. This left her in a coma for over two years, and when she woke up, she discovered something had altered in her mind. She periodically has "fits", in which she writes messages from her dead son, Kyle. And Kyle is telling her his murderer has killed other children, children whose deaths everyone thinks were accidents. One of those children Kyle mentions is Nick Bastille's son, who drowned while Nick was in prison after being set up by his former partner. Nick escaped Bellerose as soon as he could, and had made it big in New Orleans, but now he has nothing, so he returns to his father's farm in the town he hasn't seen in 18 years. When a strange woman approaches him and tells him his son didn't die accidentally, but was murdered, Nick's first reaction is to get angry. Where does this woman get off, telling him that? But Nat soon proves to him that she does have a psychic connection with her son, and she and Nick join forces to try to find the murderer. Both Nick and Nat are very well done characters, two very damaged people who, nonetheless, manage to find immense strength inside themselves. And it takes lots of strength to even be in Bellerose, especially for Nat, because this is a town full of people who think she killed her husband and son and who don't hesitate to punish her for it. This is a truly awful place for them to be in, with corrupt police harassing them and powerful people (including Nat's former father- amd brother-in-law) making their lives hell. I've read plenty of books in which one of the characters puts him or herself in a similar position and I usually just want to scream at them to just leave, why on Earth are they in that disgusting town with those disgusting people? Think Linda Howard's After the Night, for instance. I enjoyed the book, but I never really bought that Faith would put herself through the awful experience of moving back to that small town just to investigate the disappearance of that guy who meant nothing to her. In the case of Depth Perception, I never had that feeling. Nat started out the book as someone who was completely empty, except for a burning need to see justice done and her son's murderer punished. And Nick, while not damaged to the level that Nat was, was pretty desperate, too, especially once he accepts that what happened to his son wasn't an accident. This all justified that they wouldn't immediately hightailed it out of there. And I really liked that they don't decide to stay in Bellerose at the end of the book, once the truth comes out. I would have liked it better if I could have

Published by Thriftbooks.com User , 15 years ago
Depth Perception was an enjoyable read. It's on the tragic and dark side, but not excessively so. I was pretty hooked into the story. I liked the two main characters. Both are strong leads. There was definite chemistry between the two, but the book is not overly romantic. Castillo focuses mostly on the plot and all that's going on. With all that, there's not much time for romance between the two characters. Even so, I was still able to believe in the feelings that developed between the two. The suspense aspect was nicely done. Nat's ability to receive messages from the dead added a nice dimension to the book and upped the urgency of the story. Castillo didn't spend too much time pushing suspects at the readers, just some vague accusations. I think it might have been better if she'd given us more solid suspicions. But saying that, I had a pretty good guess who the bad guy was. There was a certain detail that made it rather obvious fairly early on. Another drawback in the book was that there were one or two details that were contradictory, that didn't fit with other details in the book. But they were fairly minor things. Overall, a good read. I enjoyed it.

Published by Thriftbooks.com User , 16 years ago
This book has lots of suspense with a little romance thrown in. A good read if you like romantic suspense.

Published by Thriftbooks.com User , 16 years ago
Nat Jennings has returned to Bellerose, Lousianna after three years. Her husband and son were murdered three years ago, Nat was arrested for the murders and although she was not indicted she tried to kill herself. She was in a coma for 2 and 1/2 years. So it is like it happened only 6 months ago to her. She has come home to find the killer. Hated and scorned by her in-laws and the community she struggles to find the courage to go on. Nick Bastille has come home after 18 years. The last 6 spent in prison for an arson he did not commit. His son drowned 2 years ago. He has returned to try to reconcile with his father who has alsheimers and come to grips with the pain of the loss of his son. Since Nat woke up she has been receiving messages from her son Kyle, in the form of automatic writing. According to Kyle, Nick's son Brandon was murdered by the same person who killed him and his father. Nat must convince a hurting father that his son was murdered. And that there will be more murders. As her foretelling proves true Nick and Nat join forces to stop a madman. Although I enjoyed the read if you think about it you will know who the killer has to be very quickly. Even though it is obvious it is still a good read.

Published by Thriftbooks.com User , 16 years ago
After eighteen years away including six in prison on arson and insurance fraud, restaurateur Nick Bastillo comes home to Bellerose, Louisiana. He obtains a job at a dive of a bar the Blue Gaiter and reflects how far he has fallen from his New Orleans restaurant. His father is cold towards him believing Nick set the fire. Nick knows his former partner Race Robertson performed the fiery deed and set him up for the fall. Making matters worse is his young son drowned while he was behind bars. Nat Jennings returns to Bellerose to an unwelcome homecoming too. Most locals believe she killed her spouse and child before attempting suicide. She was in a coma for two years. She has psychic skills and knows that a bad man killed her family and Nick's child, but if she says anything people will conclude that she knows because she did the deed as they insisted she eliminated her own family. DEPTH PERCEPTION is a fabulous taut paranormal thriller that grips readers once Nick and Nat meet. The story line is action-packed and filled with atmosphere that has the audience gasping as the tension mounts with a murderer ready to strike again and only Nat in the way. Though a romantic subplot between the two beleaguered stars occurs, that feels more like a bone tossed to the romance reader as the suspense is what makes Linda Castillo's exciting tale a terrific read. Harriet Klausner
Copyright © 2020 Thriftbooks.com Terms of Use | Privacy Policy | Do Not Sell My Personal Information | Accessibility Statement
ThriftBooks® and the ThriftBooks® logo are registered trademarks of Thrift Books Global, LLC