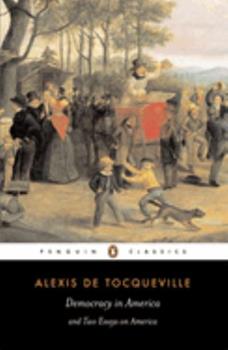 Democracy in America and Two Essays on America

A contemporary study of the early American nation and its evolving democracy, from a French aristocrat and sociologist In 1831 Alexis de Tocqueville, a young French aristocrat and ambitious civil servant, set out from post-revolutionary France on a journey across America that would take him 9 months and cover 7,000 miles. The result was Democracy in America , a subtle and prescient analysis of the life and institutions of 19th-century America. Tocqueville...

Published by Thriftbooks.com User , 23 years ago
This book has an abundance of profound observations of both praise and constructive criticism of the American political system, delivered in a richly eloquent and distinctly objective manner by a young Nineteenth Century French aristocrat/lawyer with a very impressive grasp of enduring political reality. The heart of Tocqueville's message is twofold: (1) his praise of Americans' voluntary associations as prime examples of what results from individuals pursuing enlightened self-interest, and (2) his warning that American democracy has the potential to devolve into pervasive majoritarian tyranny by an all-powerful central government covering the surface of society with a network of small complicated rules and treating citizens like children or timid and industrious animals, in perpetuity. In other words, he accurately predicted the out-of-control bureaucracy and rule by opinion poll which is now inflicting its hypnotic popular tyranny upon us. END

Helps Americans make sense of themselves....

Published by Thriftbooks.com User , 23 years ago
...and others understand Americans. I was required to read this book for a college course and was actually dreading its seemingly tedious discourses on a myriad of subjects. After diving in, however, I discovered something totally different was contained. One thing sorely lacking from education in grades K-12 is REALITY. As children we are indoctrinated with the idea of American supremacy to all other nations. I can understand instilling love in one's country, but we're being brainwashed here! After going through college I began to wrestle with the inherent contradictions of American thinking. This book systematically handles many of those issues and really helps American citizens realize how we've gotten ourselves where we are today (filthy rich & hated throughout the world.) I don't hate America, just a lot of what the government does. this book will greatly expand your way of thinking on various subjects. If taught in the proper manner, this book will shatter conventional concepts of America. Forget all that other crap we had to read in school...this should be required reading. It handles everything from economics, art, gender issues, etc....a classic.

Published by Thriftbooks.com User , 23 years ago
This is probably the best book on the history of American Government. I loved it. I highly recommend it.

Published by Thriftbooks.com User , 24 years ago
for any gov., hist., econ., soc., anth. student a must read

Published by Thriftbooks.com User , 25 years ago
to read democracy in america is to confront greatness itself, to follow the reflections of one the greatest political thinkers of all time, a man of balanced rationality, with a passionate concern for the fate of democracy--true democracy, that is, not the kind we see politicians preach on tv everyday. personally i prefer volume 2 of this great work, where the author summons up his astonishingly penetrating power of analysis and prophesy
Trustpilot
Copyright © 2022 Thriftbooks.com Terms of Use | Privacy Policy | Do Not Sell or Share My Personal Information | Accessibility Statement
ThriftBooks® and the ThriftBooks® logo are registered trademarks of Thrift Books Global, LLC