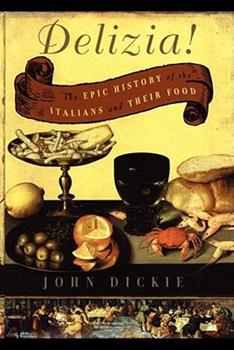 The Delizia!: The Epic History of the Italians and Their Food

Buon appetito!Everyone loves Italian food. But how did the Italians come to eat so well?The answer lies amid the vibrant beauty of Italy's historic cities. For a thousand years, they have been magnets for everything that makes for great eating: ingredients, talent, money, and power. Italian food iscityfood.From the bustle of medieval Milan's marketplace to the banqueting halls of Renaissance Ferrara; from street stalls in the putrid alleyways of nineteenth-century...

Episodic if not quite epic

Published by Thriftbooks.com User , 13 years ago
This is a delightful and excellently written book, essential if you want to probe into Italian food. It is not a history, though, epic or otherwise; it's a series of stories that bring out key moments in Italian food history. Dickie is a superb storyteller. The tales range from really crucial--especially the tale of how Pellegrino Artusi created the Great Italian Cookbook--to fascinating byways. There are almost no recipes, and the most ambitious one is wildly impractical: how to make 100 pounds of baloney (correctly "mortadelle"). Not what I will do this weekend. A few random notes: p. 48, on Marco Polo: "Why does he never mention the Great Wall or acupuncture?" Well, maybe because the Great Wall wasn't built till about 200 years after his time, and acupuncture didn't reach its modern form and popularity for even longer. On p. 227 Dickie gives one of the fictional origin points of the modern and ridiculous story that Marco introduced pasta to Italy. 53 and later: "heavily spiced" medieval food: Probably it's just because Dickie is British, but maybe he never tried the recipes. Medieval food in Italy and elsewhere (it was pretty similar all round the Mediterranean then, as Dickie points out) was not heavily spiced. Many recipes survive and give quantities. The spices spark up the flavors and are not terribly obtrusive. The modern pumpkin pie is a completely medieval recipe (except the pumpkin wasn't known till the 16th century); its spicing is the standard mix and quantity used in countless dishes back then. You judge whether that's "heavy spicing." 163: "pungent rue"--same story. The rank scent of rue cooks out when you use it as a cooking herb, and it gives a surprisingly mild flavor to the dish. 189ff, a long and superb account of cholera in Naples includes everything except one point: The main reason Naples is so cursed is that the Bay of Naples has the right mix of salt and fresh water and warmth to maximize the success of the cholera bacillus. All of which trivial points detract none at all from a thoroughly enjoyable book. I once heard a Roman waiter say to an Italian-American man who had had a bit too much wine and protested at the long wait while his food was cooked to order, "You must respect the pasta!!" Right.

Published by Thriftbooks.com User , 13 years ago
If you think history is more than what leaders and statesmen did or do, John Dickie proves that you are right!

Published by Thriftbooks.com User , 13 years ago
This is one of those books that is ideally read when you need a break from heavy thinking, but still want to feel that you are not reading junk. It would probably be a perfect introduction to a trip to Italy (or a book to bring with you on the same trip). First things first, although you will find a number of fun historical facts and myth-busting nuggets regarding Italian food, this is not really a history of the food itself. You will not find recipes or useful tips to use in your own kitchen. Dickie is a historian, among other talents, and approaches this book from the point of view of the relationship of the country to their food. The book moves from the Medieval Table to The Land of Plenty (modern Italy) as chapter organization. If there is a unifying theme or point, it is that Dickie makes it clear that food in Italy has been an urban and not a peasant business, directly intertwined with currents in culture and politics. The book is readable, if perhaps not as lively as it could have been. I enjoyed the book, and am planning to lend this copy to a good friend later today. I would recommend it to most people. Great for the armchair historian who also happens to be fond of eating. (I really appreciated the list of sources that Dickie appended to the book. It provided a rich source for future reading on the topic.)

Published by Thriftbooks.com User , 14 years ago
This is a splendid book that surveys a big, broad sweep of culinary history. It's eminently readable. Dickie employs an interesting device in this regard: each of the chronologicall ordered chapters is set in a particular place at a particular time. The most compelling sections, for me, were those that dealt with the late 19th and early 20th centuries, when nationalist projects impacted heavily on Italian foodways. An essential book to be placed alongside such classics as Waverly Root's The Food of Italy and Marlena De Blasi's volumes on regional Italian cuisine.
Trustpilot
Copyright © 2022 Thriftbooks.com Terms of Use | Privacy Policy | Do Not Sell My Personal Information | Accessibility Statement
ThriftBooks® and the ThriftBooks® logo are registered trademarks of Thrift Books Global, LLC