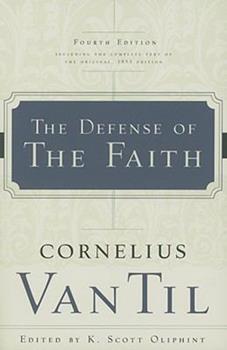 The Defense of the Faith

by Cornelius Van Til

Restoring the full text of the original 1955 work, this annotated edition sets forth and explains a method of apologetics that is consistent with the nature of Christianity.

Published by Stephanie Null , 3 months ago
Listed as in "like new" condition, but this book was printed incorrectly. Chapters 2, 3, and 4 are in there twice, and chapter 5 is missing. Very disappointed.

A Bible-based Defense of the Faith: RE

Published by Thriftbooks.com User , 12 years ago
Cornelius Van Til was born in 1895, in the Netherlands and at the age of ten his family moved to Indiana. Later Van Til earned a Th.M. and a Ph.D. "The Defense of the Faith" is part of Van Til's groundbreaking presuppositional apologetic method. This volume is essential for any Christian philosopher and apologist. In this treatise, the author aims to press the most scripturally faithful and effectual apologetic method to defend the Faith and present the Triune God to the lost. Van Til distinguishes his system from that of RCC, neo-orthodoxy of Barth, and others. Van Til writes: "The whole problem of knowledge has constantly been that of bringing the one and the many together. When man looks about him and within him, he sees that there is a great variety of facts. The question that comes up at once is whether there is any unity in this variety, whether there is one principle in accordance with which all these many things appear and occur. All non-Christian thought, if it has utilized the idea of a supra-mundane existence at all, has used this supra-mundane existence as furnishing only the unity or the a priori aspect of knowledge, while it has maintained that the a posteriori aspect of knowledge is something that is furnished by the universe." He adds for one to have any knowledge that "... there must be in God an absolute system of knowledge" (p 61). Furthermore he presses the necessity of scripture: "But I do, of course, confess that what Scripture teaches may properly be spoken of as a system of truth. God identifies the Scriptures as his Word. And he himself, as he tells us, exists as an internally self-coherent being. His revelation of himself to man cannot be anything but internally coherent" (p. 205). Many have enthusiastically embraced his forceful apologetic as he advocates: "The natural man must be blasted out of his hideouts... the Reformed apologist throws down the gauntlet and challenges his opponent to a duel of life and death from the start." Van Til defines some important terms: "Philosophy, as usually defined, deals with a theory of reality, with a theory of knowledge, and with a theory of ethics. That is to say philosophies usually undertake to present a life and world view. They deal not only with that which man can directly experience by means of his senses but also, and ofttimes especially, with the presuppositions of experience. In short, they deal with that which Christian theology speaks of as God. On the other hand Christian theology deals not only with God; it deals also with the world.... Philosophy and science deal more especially with man in his relation to the cosmos and theology deals more especially with man in his relation to God. But this is only a matter of degree." Van Til taught, inspired, and mentored many erudite scholars. Quotes from some of the brightest: William Edgar states: "Van Til showed the necessity of knowing God as a basis for knowing anything at all." John Frame opines: "Van Til's apolog

Defense of the Faith

Published by Thriftbooks.com User , 17 years ago
This whole country including most Christians are being dumbed down. More need to read and meditate on the works of Godly men such as Van Til so that they can grow in the grace and knowledge of Jesus Christ instead of turning Christianity into an emotional "feel good" experience.

Finally, a response to the philosophy of despair!

Published by Thriftbooks.com User , 23 years ago
Van Til systematically analyzes the essential equivalence of thought in the arminiun view of salavation and the world's view of the autonomy of man. He further points out the conclusion of modern secular philosophers that if man is indeed "autonomous" then there is really no control other than chance/fate and he is not truly "autonomous" but a slave to chance....further, if at the mercy of chance he is left in despair. The presupposition of ultimate truth in God alone is not just preferrable but necessary for any cogent understanding of reality. The beginning of wisdom is with God...not man. Without God, there is no basis for any reason, only despair.

Published by Thriftbooks.com User , 24 years ago
This is the book I personally consider to be THE masterwork of twentieth cetury thought on apologetics. Its only fault lies in the fact that it follows a mostly negative approach, critiquing contemporary evangelical apologetic methods. Van Til's appoach stresses the idea that arguing for the gospel must be based on faith, and not on shared presuppositions with the non-believer. He argues that the use of evidence merely persuades the non-believer that God MIGHT exist, which is what he already believes. Extremely procative and highly recommended for anyone with a background in philosophy.
Trustpilot
Copyright © 2022 Thriftbooks.com Terms of Use | Privacy Policy | Do Not Sell or Share My Personal Information | Accessibility Statement
ThriftBooks® and the ThriftBooks® logo are registered trademarks of Thrift Books Global, LLC