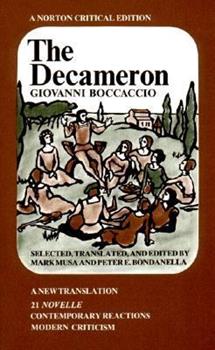 "Contemporary Reactions" includes Petrarch's letters to Boccaccio after completion of The Decameron and the responses of such Italian Renaissance figures as Leonardo Bruni, Filippo Villani, Giannozzo Manetti, and Ludovico Dolce, all of which have been translated for this edition. "Modern Criticism" includes interpretations by Ugo Foscolo, Francesco De Sanctis, Erich Auerbach, Aldo D. Scaglione, Wayne Booth, Tzvetan Todorov, Robert J. Clements, and...

Published by Thriftbooks.com User , 14 years ago
This was required reading for a graduate course in medieval history. The "Decameron" is a collection of 100 novellas by Italian author Giovanni Boccaccio, probably begun in 1350 and finished in 1353. It is a medieval allegorical work best known for its bawdy tales of love, appearing in all its possibilities from the erotic to the tragic. Other topics such as wit and witticism, practical jokes and worldly initiation also form part of the mosaic. Beyond its entertainment and literary popularity, it remains an important historical document of life in the fourteenth century. Decameron is structured in a frame narrative, or frame tale. Boccaccio begins with a description of the Black Death and leads into an introduction of a group of seven young women and three young men who flee from plague-ridden Florence to a villa in the (then) countryside of Fiesole for two weeks. To pass the time, each member of the party tells one story for each one of the nights spent at the villa. Although fourteen days pass, two days each week are set aside: one day for chores and one holy day during which no work is done. In this manner, 100 stories are told by the end of the ten days. Each of the ten characters is charged as King or Queen of the company for one of the ten days in turn. This charge extends to choosing the theme of the stories for that day, and all but two days have topics assigned: examples of the power of fortune; examples of the power of human will; love tales that end tragically; love tales that end happily; clever replies that save the speaker; tricks that women play on men; tricks that people play on each other in general; examples of virtue. Only Dioneo, who usually tells the tenth tale each day, has the right to tell a tale on any topic he wishes, due to his wit. Each day also includes a short introduction and conclusion to continue the frame of the tales by describing other daily activities besides story telling. These frame tale interludes frequently include transcriptions of Italian folk songs. The interactions among tales in a day, or across days, as Boccaccio spins variations and reversals of previous material, forms a whole and not just a collection of stories. The basic plots of the stories including mocking the lust and greed of the clergy; tensions in Italian society between the new wealthy commercial class and noble families; the perils and adventures of traveling merchants. The title is a portmanteau, or combination of two Greek words meaning "ten" and "day". Boccacio made similar Greek etymological plays of words in his other works. The subtitle is Prencipe Galeotto, which derives from the opening material in which Boccaccio dedicates the work to ladies of the day who did not have the diversions of men (hunting, fishing, riding, falconry) who were forced to conceal their amorous passions and stay idle and concealed in their rooms. Thus, the book is subtitled Prencipe Galeotto, that is Galehaut, the go-between of Lancelo

Published by Thriftbooks.com User , 14 years ago
Boccaccio's _Decameron_ is a collection of 100 tales: 10 stories told by 10 refugees from the Black Death. This collection only includes 21 of them, which was a disappointment - I had hoped to read all 100. (My mistake for not paying closer attention.) With that said, the selections included were fantastic and certainly whetted my appetite for more. The literary criticism of the stories was of only passing interest, but did provide some depth to my understanding of the stories, the author and the times. For those seeking a taste of the Decameron, I highly recommend it. If, like me you were looking for the entire collection, look elsewhere. Regardless, a very worthwhile read.

Published by Thriftbooks.com User , 17 years ago
Unlike a lot of the writers who sprung out of the medieval period, the Decameron is extremely readable. 100 stories organized into 10-day chunks makes this book a classic piece of literature... and unlike Chaucer's Canterbury Tales, you don't have to wade through the language to get at the meaning (part of this has to do with the translation of Italian into modern English). During the Plague of the mid-14th century, ten people (7 women and 3 men) escape the city of Florence to the then-countryside of Fiesole. Each day they elect a king or queen, who dictates the theme of the day's stories. Centering around love, lust, sex, and relationships between people, the stories in the Decameron transcend stereotypes of the middle ages and created a scintillating and fresh approach to the art of storytelling. The Decameron is one of my favorite novels; this is the second time I've read it, and it never ceases to amaze me by the depth of human life represented. In addition, this is an excellent translation of the original; the translators manage to get at Boccaccio's meaning without destroying his prose.

The art of storytelling...

Published by Thriftbooks.com User , 17 years ago
'The Decameron' is a series of 100 stories, ten stories told each night by ten different people who had left the city for a country sojourn to escape a time of plague. Giovanni Boccaccio, an Italian author known as part of the founding trinity of Italian literature (the others are Dante and Petrarca), was born in 1313, and produced most of his literary works by his mid-30s. The ten characters in 'The Decameron' were all young people, much like Boccaccio, and the passions, interests and issues of his own age is illustrated among these folk -- Boccaccio's possibly-fictitious love, Fiammetta, is similarly one of the characters here. This edition by Norton does not include all 100 stories, but rather 21 selected stories, many of the more popular ones, selected by professors Mark Musa and Peter Bondanella (professors at my university when I was there 20 years ago), who are also known for their editing and translation of works by Dante and Machiavelli. There are selections from each 'day' (set of 10 stories), as well as a few of the extra texts, such as a prologue, introduction, and overall conclusion by Boccaccio. These are edited to fit together, as Boccaccio's tales often would wind from one story to the next, making a selection of disconnected stories difficult in transition without editing. There are also two different kinds of critical analytical materials included in this Norton Critical Edition. The first includes personal correspondence samples, particularly between Boccaccio and Petrarca; these date even after the writing of 'The Decameron', showing the interest and reactions. These materials include other contemporary and closely-following generations' reactions and influences from 'The Decameron'. The second part of the critical materials includes more modern scholarship and analysis. These deal with history, philology, philosophy, and other literary criticism topics (structuralism, formalism, rhetoric, etc.). It also includes a study of a film interpretation of 'The Decameron', filmed by Pier Paolo Pasolini. While purists will probably be disappointed with the abridgement of the text, the essays deal with the whole of the work of 'The Decameron'. Hopefully those who read the stories here will be motivated to continue their reading with a full-copy edition of 'The Decameron'. The translations are interesting and lively, and the stories continue to make connections with audiences today.

Published by Thriftbooks.com User , 21 years ago
as i approached boccaccio`s decameron i was forced not to to stop reading it and though it`s language was rather hard giovvanni`s strange ability of putting words together made me comprehend every single part of it.ten young people chose to escape the devastating plague by going into a solitary house a little away from florence.in order to avoid burdom they all agreed that each one of them to tell a story each day .boccaccio used such stories to depict the absurdities and moral corruption of the many people living . all in all the gift of poety and literature that he has enabled his story to be very amusing , he could serve his aim through the book by using a light comic style which made it interesting to whoever reads it.

Il Decamerone Mentions in Our Blog