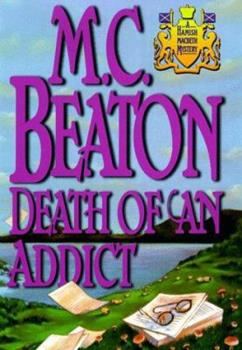 Death of an Addict (Hamish Macbeth Mysteries, No. 15)

(Book #15 in the Hamish Macbeth Series)

Former heroin addict Tommy Jarret, invigorated by the prospect of staying clean and writing a book about his newfound recovery, is suddenly found dead in his Strathbane chalet -- the victim of an apparent drug overdose. Lochdubh constable Hamish Macbeth, however, senses foul play. Recruited to work undercover with tough Glasgow Detective Inspector Olivia Chater as a husband and wife team, Macbeth dons Armani to dive into the underworld as an international...

Published by Thriftbooks.com User , 14 years ago
As the fifteenth entry into the popular Hamish MacBeth series opens is enjoying the beautiful early autumn weather in his beloved Lochdaubh and rejoicing that he is finally over his long term on again off again romance with Priscilla. His peace is shattered though when a tenant of a tourist cottage is found dead. Once it is revealed that the young man had died of a drug overdose it was assumed that he had relapsed and begun using again. Hamish was not so certain, and despite being told to drop the matter, began his own investigations. The trail let him away from Lochdugh, first to an even more remote village, then to the mean streets of Strathbane and finally to Amsterdam - Hamish's first trip abroad. As with any long running series Beaton has had to come up with various ways to keep the series fresh without losing the very things that made it popular in the first place. Taking Hamish out of the Highlands where he is most comfortable to unfamiliar territory puts a new slant on the series. Beaton has managed to let Hamish grow in a realistic manner without losing his appeal. For fans of the series this is a treat, Hamish gets to spread his wings a bit but we still get to catch up on a bit of the latest Lochdubh news. Those new to the series would probably enjoy beginning with one of the earlier books although it is not absolutely necessary to read this series strictly in order.

Published by Thriftbooks.com User , 17 years ago
I loved this story. I look forward to each new addition to this wonderful series and this one did not disappoint! In it we see Hamish at his most exasperating and endearing best. When a young recovered(?) drug addict is found dead in his rented chalet, Hamish feels that something doesn't add up. Although Strathbane writes it off as another dead junkie, Hamish thinks the young fellow was murdered. While trying to pursue this theory on his own, he is thrown into the drug buying and selling scene in Scotland. One thing leads to another and it turns out that Hamish is put undercover with a rather fetching Detective Inspector to expose a big drug ring in Strathbane. Hamish finds himself in hot water, and is exposed to all manner of nefarious people, but you can bet he triumphs in the end. He also determines just what happened to young Tommy Jarret. Lots of fun.

Another winner about Hamish Macbeth

Published by Thriftbooks.com User , 18 years ago
I read this series largely for the amusement of reading about Hamish's eccentricities and exploits. They never fail to make me smile, even with mayhem in the background.For those who are unfamiliar with Hamish, give the series a try. For full enjoyment, you might want to start with the first book: Death of a Gossip, in which the village and characters are introduced.For those of you who have met Hamish only through the TV series, I don't think that the books are at all like the show. I've noticed some readers are disappointed with the books after seeing the television series...

Published by Thriftbooks.com User , 18 years ago
Now, this was my twelfth experience with Hamish and I feel it was my best - better than my other favorites: Death of a Prankster and Death of a Macho Man. The romance and its complications with Olivia Chater and the sojourn to Amsterdam provided fresh air to the Hamish Macbeth series. It was enjoyable to see Hamish coupled with Rolex, Armani and Mercedes. Lochdubh is a wonderful place, but it's nice to get away. As Hamish Macbeth might say: "Death of an Addict was a grand read."

Hamish "hams" it up

Published by Thriftbooks.com User , 22 years ago
Both series by this author are delights...and this new addition is no exception. Hamish is expanding his horizons and going "uptown." Although I prefer him sticking to the village and just hanging around waiting for another murder to solve, I did enjoy this latest in the series and will continue to buy and read, in that order, of course. Hamish is in good form with a new romantic interest, but I do miss Patricia and hope she returns soon.
Copyright © 2020 Thriftbooks.com Terms of Use | Privacy Policy | Do Not Sell My Personal Information | Accessibility Statement
ThriftBooks® and the ThriftBooks® logo are registered trademarks of Thrift Books Global, LLC