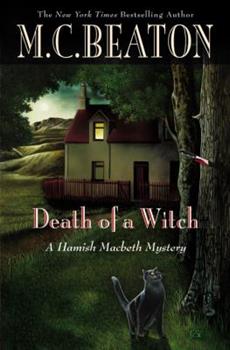 Death of a Witch (Hamish Macbeth Mysteries, No. 25)

(Book #24 in the Hamish Macbeth Series)

Beaton's bestselling trilogy--as rich and warming as fine malt whiskey, and every bit as addictive (Houston Chronicle)--continues as Hamish Macbeth, Scotland's most laconic and low-tech policeman, investigates the death of a woman with seemingly unearthly powers.

Published by Thriftbooks.com User , 12 years ago
M.C. Beaton gives us another enjoyable story from the chronicles of Hamish Macbeth! DEATH OF A WITCH begins with Hamish Macbeth returning home. He had taken a cheap off-season trip to Spain and had hoped for a little romance. However, he ends up with a large group of other vacationers, all in their sixties and seventies! After the disappointing vacation, Hamish is back home in the Scottish village of Lochdubh where he is the local police constable. He's missed his home and his pets and is anxious to see what's been going on. While inquiring for local news, Hamish finds out that a rather odd woman has moved to the village. According to local gossip, more than a few of the village men have been seen visiting her. Since, she's known to be selling herbal medicines, some are calling her a witch and some are calling her other names. When Hamish meets Catriona Beldame, he finds her to be rather interesting. When she ends up dead, the search begins not only for her murderer, but for answers which are difficult to come by. Seems like the villagers are keeping their own secrets. Secrets, that Hamish can only begin to guess. This is the 24th book in this series. What makes these stories so enjoyable are all the interesting characters. Hamish is likeable and very caring of his small hamlet. The villagers are witty, nosy, bossy, odd, and out spoken. Hamish's boss is nasty and mean spirited. Also, there's always a lady or two who fancy the red haired Hamish!

DEATH OF A WITCH is a terrific introduction to a quirky, amusing protagonist and an entertaining mys

Published by Thriftbooks.com User , 12 years ago
DEATH OF A WITCH is the 24th mystery featuring Hamish Macbeth in this cozy series set in the picturesque Scottish Highlands. Hamish is lazy, sly and utterly amusing --- he mooches food wherever he can, poaches fish from local streams, is more devoted to his dog Lugs and domesticated wild cat Sonsie than to any humans in his life, and assiduously resists promotion to avoid leaving his sleepy and beloved village of Lochdubh (pronounced "Loch-doo"). Hamish has just returned from a dull vacation in Spain to find a newcomer (an "incomer" in local parlance) in the village, a mysterious woman who goes by the name of Catriona Beldame. Catriona appears to have endeared herself to many of the men in the village of Lochdubh, but they refuse to talk to Hamish about her. Hamish learns that the village women hate Catriona, and many of the superstitious villagers fear her as a witch. Rumors indicate that she has been selling the men potions to increase their sexual prowess (and presumably make their wives interested in sex again, perhaps for the first time in decades). But Hamish has reason to suspect that the potions are harming the men rather than helping them. When Catriona ends up dead under ugly circumstances, a cloud of suspicion hangs over Hamish, who was heard to threaten her, and on the other villagers, any of whom might have had cause to wish her dead. As Hamish is puzzling over the mystery of Catriona's murder and the arson of her home, three other villagers are killed in quick succession. Hamish must act fast to learn if and how the murders are connected to each other before the killer strikes again. As usual, he receives no help from surly and jealous Inspector Blair, who tries to keep Hamish away from the case. Luckily, Blair's underling, Jimmy Anderson, is always ready to supply Hamish with the information he needs, provided Hamish in turn is willing to keep Jimmy supplied with whiskey. To uncover the mystery behind the murders, Hamish enlists the help of the various women in his life: his reporter friend (and erstwhile love interest) Elspeth Grant; his ex-fianceé and local lady of the manor, Priscilla Hallburton-Smythe; and Lesley Seaton, a pretty forensics expert who appears to have set her sights on Hamish. Gangly, awkward and exasperating though he might be, Hamish also manages to be utterly disarming and draw his share of female attention, although typically not to satisfactory ends. It is clear by this point in the series that, like M. C. Beaton's other famous protagonist --- the indomitable Agatha Raisin --- Hamish Macbeth is doomed never to find love. But his run-ins with the opposite sex are always entertaining and often laugh-out-loud funny. Here, his problems with his personal life offer a microcosmic view of the larger theme of the book --- the battle of the sexes. The married men of Lochdubh desire more active sex lives, while their indomitable wives dismiss sex as something filthy that they are glad never to have to partake of

Published by Thriftbooks.com User , 12 years ago
I love the Hamish McBeth series and the beautiful descriptions of Scotland and the village where he works and lives and gets involved with many women, but seldom wins the one of his heart. Good entertainment.

One of the Best in the Series: A Splendid Story with Lots of Humor and Surprises

Published by Thriftbooks.com User , 12 years ago
Even in a wonderful series like M.C. Beaton's books about Hamish Macbeth, there will be ups and downs. Fortunately for devoted readers, Death of a Witch is an unexpected up that keeps surprising, satisfying, and amusing to the last page. Unlike the weaker books in the series, Death of a Witch is filled with mysteries that are not easy to solve, complex and unexpected interactions among the characters, and every variety of reasonably clean humor you can have about sexual relations. Be careful what reviews you read. It would be easy to stumble onto spoilers that could greatly reduce your joy in this marvelous story. As the book opens, Hamish is returning from a trip to Spain that didn't turn out as he expected. Immediately, he learns that there's a newcomer to the village, Ms. Catriona Beldame, who wants to buy his car. As soon as Hamish cleans up a little mystery about who has been tipping off robbers as the location of stakeouts, Hamish has to see the woman for himself. The local women don't have anything good to say about her, and the men are strangely quiet even though they are reported to be visiting her. Dr. Brodie provides an unexpected clue as does a strange occurrence during Hamish's first visit. Before long, there are unsolved crimes that lead Hamish into a possible romance. Blair is so concerned that Hamish will solve the cases that he banishes Hamish. With Jimmy Anderson's help, Hamish is able to stay in the middle of the case. The overriding theme of the book is the battle of the sexes, as portrayed through the theme of men wanting to have more frequent intimate relations than their wives and girl friends do. The consequences are very funny and keep providing new twists on a well-known theme. If you've ever enjoyed Hamish's problems with the opposite sex, you'll be especially pleased with this book which puts Hamish into many new pickles. Have a ball!
Copyright © 2020 Thriftbooks.com Terms of Use | Privacy Policy | Do Not Sell My Personal Information | Accessibility Statement
ThriftBooks® and the ThriftBooks® logo are registered trademarks of Thrift Books Global, LLC