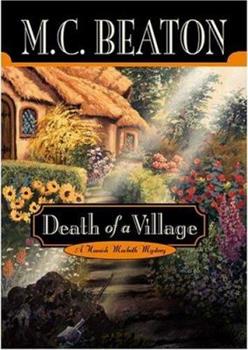 Death of a Village (Hamish Macbeth Mysteries, No. 19)

(Book #18 in the Hamish Macbeth Series)

This description may be from another edition of this product. From the author of the Agatha Raisin television series... Death of a Village: A Hamish Macbeth Mystery Trouble is afoot in a Scottish fishing village as Constable Macbeth finds the pub empty, the...

Published by Thriftbooks.com User , 13 years ago
Death of a Village by M.C. Beaton is another great addition of the wonderful Hamish Macbeth Mysteries. Beaton has given us a bit of a different serving with this one though. Don't worry though, Hamish is still Hamish and Beaton's Highlands are still the wonderful, character filled place we always find in the world around Lochdubh. In Death of a Village Hamish is faced with a series of crimes, some small, some not so small, that must be solved and the flawed Hamish is up to them all. The author does deviate from her usual formula in this one, although I suppose you could count the one village in the book as the traditional one obnoxious character that sort of gets knocked off. Be that as it may, the story runs smoothly and there are few pages in the entire book where something is not happening. Like the rest of the Hamish Macbeth Mysteries, this one is light reading and fun reading. For those who are not familiar with these books, it should be noted that while they are indeed, "light" reading, they are not by any means "bad" reading. Beaton can say more in four or five sentences than most authors can say in a chapter. These are very well crafted stories meant to entertain and they certainly get the job done. I am one of those that feel many of our newer authors could take some lessons from Beaton as to story telling methods and story telling skills. I mean when the author has our hero frying a trout, he does just that...fries a trout! We really do not need five pages of filler telling us step by step how to cook a fish. That is what cook books are for. On the other hand, with a minimum number of words, Beaton can perfectly describe a Highland storm, or a mountain meadow. I was delighted to find in this work as to where and how Hamish obtained his wonder dog, Lugs. The personality of Lugs is so like that of Hamish, the author must be a great lover and observer of dogs. It was also interesting to read of the twists and turns our red headed hero took in order to avoid being promoted again. Now this is not meant to be a spoiler, but do not get your hopes up that Macbeth's love live will take a turn for the better....although it does take an interesting turn in this work. This poor guy just has no luck with woman...I wonder why? The author also, via Hamish, gives even more lesions on how to receive endless cups of coffee and tea and goodies at absolutely no cost to him self. This is actually quite useful information! Short, easy reads which are simply fun is the best way to describe these books. I still have several to go as I think there are about twenty of them, but I must admit to looking forward to the next and am sort of worried that I will eventually catch up with the author! Recommend this one highly.

Another homerun for M.C. Beaton!

Published by Thriftbooks.com User , 18 years ago
This is the nineteenth (not eighteenth, you must include A Highland Christmas) in a series of mysteries featuring the detective work of small town, Highland Scottish detective Hamish Macbeth, P.C. In this book, Hamish must work overtime to avoid a promotion out of his beloved Lochdubh. But, that is not all of his problems. During a recent visit to the tiny village of Storye, he finds that the people there are acting quite strange, as if some sort of religious mania has gripped them. When the situation there turns dangerous and then deadly, Hamish knows he must get to the bottom of whatever it is that is going on.This is another homerun for M.C. Beaton (pseudonym of Marion Chesney)! This story is every bit as good (excellent) as the other Hamish books, and makes for some gripping reading. Somehow, the author succeeds in making the Hamish Macbeth stories swing effortlessly between lighthearted humor to deadly mystery, all without losing the seeming reality of the story.The characters in this story are likable and interesting, the story is gripping and entertaining, and the mystery quite fascinating. I think that this is a great book, one that you should consider buying!

Published by Thriftbooks.com User , 18 years ago
Fans of Hamish Macbeth will rejoice! Hamish is back, slightly perturbed by stories that his adored Priscilla will be marrying someone else. He knows they're unsuitable -- but he misses her.Tall, red-headed Hamish continues to attract women, however, and the local reporter Elspeth has been showing some interest. With her help, he digs into a series of cases that only loosely relate to one another. A nearby village seems caught up in a sinister spell. A lovely young wife seems to be abused. Residents check into a local nursing home and some seem to check out awfully fast. And villagers report some mysterious action along the jagged coastline.Hamish loves a mystery but this time his skill may get him the reward he doesn't want: a promotion to a big-city police force, where he'll be lost in the crowd. Nearly every character in the series -- as well as the reviewers -- call Hamish unambitious, but I think he's a man who's got everything he wants, and he knows it. And on some level, he seems to know he's not destined for marriage (thankfully -- the series would never be the same) and takes comfort in his beloved dog, Lugs. It's easy to dismiss M.C. Beaton's books as light -- and they are -- but she's a solid writer. She creates characters in a sentence or two and even gives them some depth. Her characters have self-defeating flaws as well as heroic virtues. Her books are small but you get a real sense of people and place -- the result of tight, careful writing. On page 233, we learn how Hamish acquired Lugs -- in 3 sentences. Some writers would need 3 pages.Let's hope we see a few dozen more volumes from this prolific and gifted author.

Published by Thriftbooks.com User , 18 years ago
No our highland hero doesn't don a cape and tights, but with as many crimes as he's solving he is achieving superhero status, with his devoted LUGS as his faithful sidekick. This time the irrepressible M.C. Beaton provides a delightful deviation from the formula of bumping off the most obnoxious character, and gives us lots of mystery and mayhem for the buck - but will an entire village die? And how to prevent a promotion that would send him away from his beloved Lochduh? With cunning, an offbeat attitude and a willingness for unorthox methods, he dances about the plodding Blair and Anderson and pulls numerous surprising solutions out of his hat. But weighing heavily is the peculiar air of the seaside town of Storye. Weighing almost as heavily is Hamish's luck with women. Will Priscilla really marry? Is Hamish in danger of cradle robbing? Will he ever give the right signal to the rather bizaare lady reporter? Is he really involved with his married admirer? With equal parts of tea and whiskey, Hamish manages to be the unluckiest - or luckiest? - Superhero of them all as the clock ticks for the Village of Storye.Let me also say that the cover is a departure, and one that makes the reader eager to crawl right into the book.

Published by Thriftbooks.com User , 18 years ago
Police constable Hamish Macbeth loves living in the small Scottish Highland village of Lochdubh because he knows and likes most of the residents who in turn trusts him. He's regarded as a maverick at headquarters and his superiors would like to get him transferred to a bigger place where his talents could be better utilized. Hamish is very comfortable being a constable and does not want to rise in the ranks.When he cracks an insurance fraud scheme, he becomes a media darling and the brass has every attention of transferring him whether he wants to go or not. He uses a bit of subterfuge to stay in Lochdubh but he soon breaks open another case involving a nursing home killing their patients for profit. Before he can talk to headquarters again, he is knee deep in an investigation in the hamlet of Stoyre where the villagers are acting very peculiar and nobody is willing to talk to him. Hamish is determined to find out what is going on there even if it means endangering his life.This is the eighteenth Hamish Macbeth mystery and it is as refreshing and enjoyable as the previous seventeen books in this long running and delightful series. M.C. Beaton has created a hero it is impossible to dislike, as he is an honest non-ambitious man who is very happy with his place in the universe. If Hamish shows as much brilliance in future books, he is going to be hard pressed to refuse a promotion.Harriet Klausner
Copyright © 2020 Thriftbooks.com Terms of Use | Privacy Policy | Do Not Sell My Personal Information | Accessibility Statement
ThriftBooks® and the ThriftBooks® logo are registered trademarks of Thrift Books Global, LLC