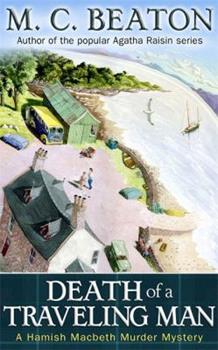 Death of a Travelling Man: A Hamish Macbeth Murder Mystery

(Book #9 in the Hamish Macbeth Series)

This description may be from another edition of this product. From the author of the Agatha Raisin television series... DEATH OF A TRAVELING MAN: A Hamish Macbeth Mystery Lochdubh constable Hamish Macbeth's life is going to pot. He has-horrors -been promoted,...

Published by Thriftbooks.com User , 12 years ago
I ordered a book from a dealer I did not know previously. The book was exactly as described. It was shipped promptly. I was very happy with my transaction.

Published by Thriftbooks.com User , 17 years ago
Death of a Travelling Man is an excellent addition to the Hamish Macbeth series. In it we see a newly promoted Hamish trying to put up with a trying police constable (P.C Willie Lamont). All Hamish wants is the privacy of his home back without the arduous efforts at cleaning by Willie. A man can't even relax in his home - Hamish thinks. Then something happens to really upset the applecart in the village of Lochdubh. A "traveller" arrives in town, and seems intent on staying. Hamish, for some reason can't stand the man, but all the village ladies seem to think he's marvellous, at first. Then it appears that some of the women in town have had a sudden change in personality, and the peace of Locdubh is ruined. When Sean, the traveller, is found bludgeoned to death in his trailer (or caravan as the English call it), Hamish can't help breathing a sigh of relief, but peace doesn't return and he realizes that it won't until he finds the killer. Hamish is his usual lovable and charming self, but he finds he has to get tough with some long term Locdubh residents in order to get to the truth. This is probably one of my favourite Hamish stories so far.

Death of a Travelling Man

Published by Thriftbooks.com User , 18 years ago
"Death of a Travelling Man" is the ninth Hamish Macbeth mystery by M. C. Beaton, a series set in the Scottish highlands in the town of Lochdubh. Hamish has been promoted to sergeant, and has a helper in P.C. Willie Lamont. With so little crime in Lochdubh Willie is usually either cleaning the station or spending time at the Italian restaurant with the lovely Lucia. Sean Gourlay and his girlfriend Cheryl Higgins roll into Lochdubh in an old bus converted into a travelling home. Hamish knows they are trouble and orders them to leave. The townspeople think he is being too harsh, and the pair soon park their bus in back of minister Wellington's home. Soon after their arrival, many of the women of the town start acting strangely. Four vials of morphine vanish from Dr. Brodie's office and one hundred pounds disappear from the Mother's Union. Then Sean is found murdered in the bus. Who killed him? Was it one of the women of the town whom Sean had been blackmailing? Was it Willie Lamont, who learns that Lucia had kissed Sean Gourlay? Could it have been Sean's girlfriend, Cheryl? Hamish once again sorts through everything and solves the murder. An interesting turn takes place in Hamish's relationship with Priscilla Halburton-Smythe. "Death of a Travelling Man" is an excellent novel and a very entertaining read.

Published by Thriftbooks.com User , 20 years ago
I have read nearly all the series up to and including this one. I think this may be the best one of all. Hamish now has a side-kick by th name of Willie Lamont. Hamish would love to get rid of him so he could go back to his old way of doing things. The travelling man is Sean Gourlay, a traveller, something like a gypsy. He parks his bus on the Pastors property and Hamish cannot make hom leave. Then things begin to disappear, and people begin to change. Hamish is sure Sean is behind it. Then Sean is murdered. Hamish is really glad but he has to find the killer. Seems Sean was getting close to four ladies in town. Any of them would have done it. Also the restaurant owner wanted to kill him. But who did? Hamish also has to fight Inspector Blair, who wants to discredit Hamish before he gets another promotion. Will Hamish find the right killer? Will he ever propose to Priscilla? Will what the four ladies did be found out? Need to read to find the answers. I think you will enjoy the book. Great Scottish words and country.

Published by Thriftbooks.com User , 22 years ago
once more i was entralled by the adventures of Police Constable hamish mcBeth. I love this series and Death of a Travelling man was exceptional. When a suspious looking man and woman camp in Lochduhh hamish smells trouble. When the man is killed it's up to hamish to find out who did it and why. It seemed that the man really turned on the charm with the ladies of the village. Happy reading!
Copyright © 2020 Thriftbooks.com Terms of Use | Privacy Policy | Do Not Sell My Personal Information | Accessibility Statement
ThriftBooks® and the ThriftBooks® logo are registered trademarks of Thrift Books Global, LLC