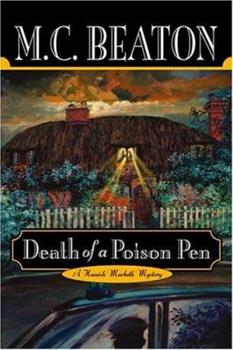 Death of a Poison Pen (Hamish Macbeth Mysteries, No. 20)

(Book #19 in the Hamish Macbeth Series)

As a series of poison pen letters sweeps through the town of Lochdubh, Hamish Macbeth begins to suspect a sinister motive, a suspicion that is justified when the local postmistress is found hanged, a supposed suicide.

ANOTHER RELAXING READ IN A GREAT SERIES

Published by Thriftbooks.com User , 14 years ago
I must admit to being rather addicted to the "cozy mystery" genre. They are a source of relaxation for me. These, the Hamish Macbeth series by M.C. Beaton, are some of my favorites. As other reviewers have pointed out, each of the twenty or more books are much the same. Same plot, same characters, same locations, etc. etc. That is okay though. I find this rather comforting. The various characters in Beaton's stories sort of become friends as you keep reading her books and this is always nice. In this offering, quite a number of the resident's of Hamish's village are recipients of poison pen letters, some which are wild accusations, some with a grain of truth and some, hitting quite close to home. Suddenly Officer Macbeth has two murders on his hands and an endless list of suspects to sort through. The plot though, is actually sort of secondary to this particular series. For me it is the characters, the description of the Scottish Country Side, the almost dark humor and the interaction between the many characters that make the book. M.C. Beaton is certainly a story teller and is able to articulate her stories through her writing quite well. The humor is dry, and as I said, can be a bit dark at times, but can be hilarious at the same time. Hamish Macbeth, the rather bright and likable police officer is, throughout this work, as with the others, absolutely mystified with the females in his life, and his somewhat quaint love life. As one reviewer put it, he does not have a clue! I love the author's description of the towns, food, country side, people and of course, Hamish's relationship with his dog. The author tells a simple story which is easy to read (no great thought is required, which is very nice) and the stories are quite fast moving. I find the author's syntax to the quite smooth and a pleasure to read. This is one series I will no doubt stick with and look forward to more. Highly recommend this one if this is your sort of cup of tea.

Published by Thriftbooks.com User , 17 years ago
Hamish Macbeth is a wonderful character. He always seems to bumble his way to a solution in the many murders that seem to occur in his area, but underneath that shambling exterior is a mind that is as sharp as a whip. The Hamish Macbeth series is one of my very favourite series, and even though Ms. Beaton has about 20 entries in the series it just never seems to get stale. The characters that we meet with every book (the wonderful, eccentric citizens of Lochdubh), plus the new ones that she introduces each time are what make this series so special. I am sad that I've now caught up to Ms. Beaton, and now I am relegated to waiting (very impatiently I might add) for the next book. I have enjoyed every minute that I've spent with Hamish in wonderful Lochdubh. In this book, Hamish has been bothered with a vicious poison pen writer in the neighbouring village of Braike. He is worried because he fears that this letter campaign is going to lead to murder, and sure enough that's what happens. He and his wonderful "lady friend" Elspeth work together to try to trap the writer and to find the murderer. It turns out that they're not one and the same. Hamish also gains the help of another young lady that is visiting Lochdubh. She said it was for a holiday, but actually her intent was to try to ensare Hamish as a form of "getting back" at her uppity friend Priscilla, who even though she is engaged to be married, still seems to carry a torch for Hamish. This series is superb entertainment, and I can give no higher accolade than that.

Published by Thriftbooks.com User , 17 years ago
DEATH OF A POISON PEN is set in a small village in the Scottish Highlands. It is populated with quirky characters and a lovable, bumbling, tall, red-haired constable named Hamish McBeth. Hamish is somewhat lazy and likes his little village to run smoothly, but it never does. This time around some villagers are receiving poison pen letters. A postmistress is found hanged in her room and a vacationer comes to Lochdubh with the sole purpose of seducing him. He does have his hands full these days.I consider the Hamish McBeth series the better of the two series that M.C. Beaton writes. The characters really make the stories endearing and fun. That Hamish ever solves any case always seems like sheer fluke, but you are always rooting for him. The plots are always rather straightforward and not too complicated and it makes for a quick read. This is a perfect book for a rainy afternoon.

Published by Thriftbooks.com User , 17 years ago
The villagers of Lochdubh and nearby Braikie are being plagued with a rash of poison pen letters. And while the letters seem silly (many of the claims seem to be absolutely ludicrous), Hamish Macbeth cannot help but worry about the one letter that might provoke a murder. And true enough things take a very serious turn indeed when the postmistress of Braikie, Miss Amy Beattie, is found hanging from her ceiling, an apparent suicide. But Hamish doesn't believe that it is suicide, and insists on a proper investigation. But it is only when murder claims another victim soon after Miss Beattie that Hamish begins to suspect that this could be a very complicated and dangerous case. Fortunately for Hamish (whether he likes it or not) he's going to get a lot of help in unraveling this case: first there is his friend, reporter Elspeth Grant, willing to offer her keen insights (and more if need be); and then there is also vacationing Jenny Ogilvie, a jealous friend of Hamish's ex-fiancee, Priscilla Halburton-Smythe (whom he still hasn't completely gotten over), who's come to Lochdubh with the intention of nabbing Hamish for herself. Will Hamish discover who the murderer is before (s)he strikes again? Will Jenny succeed in her plan to seduce Hamish? More importantly, will Hamish finally get over Priscilla?Thank God for M. C. Beaton's latest Hamish MacBeth installment! I was in the mood for something GOOD and light and amusing, and "Death of a Poison Pen" fit the bill completely. Swiftly paced and cleverly constructed (and let's not forget the authour's biting humour and her intelligent character portrayals), this latest Hamish MacBeth mystery novel was just the thing to sit down and unwind with, esp after a hard day's work of house cleaning. A real treat.

Published by Thriftbooks.com User , 17 years ago
Someone in the small Highland town of Braikie has instituted a poison pen letter writing campaign going so far as to accuse Police Constable Hamish Macbeth of having an affair with the minister's wife. Although nobody is taking it seriously, Hamish knows it is just a matter of time before someone gets very angry and violence could be the result. When the post mistress Miss Beatie dies with a poison pen letter near her body, the police rule it a suicide.Hamish doesn't think it is suicide and an autopsy proves him right. The thirty something year old women was poisoned and he doesn't have a clue who the culprit could be. When the retired school mistress is killed, the victim of several knife wounds Hamish knows instinctively the two killings are linked but he needs some help. His ex-girlfriend's girlfriend and the local reporter are more than willing to help the constable out.This is the twentieth Hamish Macbeth Mystery and the series is as fresh, witty and upbeat as the day the first book in the series was published. Hamish takes his job very seriously but in his personal life when it comes to romance, he is, to put it bluntly, a doofus. This makes him adorable and endearing to readers who hope that just once he winds up with the woman he truly loves. This mystery has a fast paced plot and a descriptive look into the culture of a small Highlander village which makes DEATH OF A POISON PEN a treat not to be missed.Harriet Klausner
Copyright © 2020 Thriftbooks.com Terms of Use | Privacy Policy | Do Not Sell My Personal Information | Accessibility Statement
ThriftBooks® and the ThriftBooks® logo are registered trademarks of Thrift Books Global, LLC