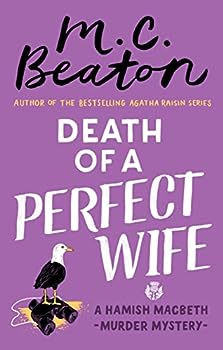 Death Of A Perfect Wife

(Book #4 in the Hamish Macbeth Series)

This description may be from another edition of this product. From the author of the Agatha Raisin television series... Death of a Perfect Wife: A Hamish Macbeth Mystery Hamish Macbeth, the laid-back constable of Lochdubh, Scotland, has a new Land Rover to drive...

Published by Thriftbooks.com User , 13 years ago
Death of a Perfect Wife is another great book by Beaton. One woman moves to Hamish's quiet town and turns it upside down. Changes so many lives and ends up disliked. Turns out this paragon and saver of bats is really a slick chick that knows antiques and how to get them from people, and turn around and sell them for a big profit. Hamish is as always on track to expose her. Clever Hamish figures out how she was killed and who did it. Of course we expect nothing less of our poaching cop. I listen to the audio versions and love Davina Porter she is a one man show. It's amazing how she can change her voice to suit every character and never miss a beat. Even more amazing is she does it for every book. She's wonderful. Graeme Malcolm can't hold a candle to her. Graeme Malcolm doesn't seem to change the voices very well for the various characters. His voice kind of drags or monotones a lot. Sure wish Porter was doing the newer books. But even Graeme Malcolm can't ruin a Beaton book. You can't go wrong listening to anything by this fab author. I love her wry humor. Also learned a lot of things because I look up on google some of the things she talks about, like the Sutherland Clearances. Never learned about that in school. Read and enjoy or better yet listen and enjoy even more.

Published by Thriftbooks.com User , 13 years ago
In this fourth installment of the popular Hamish Macbeth series a new couple has moved into the sleepy little Highland village of Lochdubh and caused quite a stir. Trixie and Paul Thomas have come to the village to open up and Bed and Breakfast, but they have arrived in the midst of the brief tourist season, with few of the needed furnishings and claiming to have no funds to purchase any. PC Macbeth found that curious but was distracted from investigating further when he discovered that his on again/off again love, Priscilla had returned to the village, and had apparently been avoiding him. Soon though Macbeth had to focus on police matters when Trixie is found murdered and it appears as though there is no shortage of suspects. In the end though Macbeth manages to sift through the false leads and ferret out the truth. Along the way he also finds a way to sort out some of his neighbors' problems, escape promotion and once again court the fair Priscilla. This is a typical addition to this long running series of cozies. Fans of the series will not want to skip this one, those new to the series will probably want to begin at the beginning but could start here. Those looking for anything other than a cozy where the cast of continuing characters is more important than the mystery will probably want to look elsewhere.

Published by Thriftbooks.com User , 13 years ago
I've been re-reading this series (in order this time!) and this is the first where I feel that sense of community that first drew me into the series. You get a good look into village life for Hammish, and meet a lot of the characters that truly make the series as enjoyable as it is. And the mystery is quite well done, with a large pool of suspects and loads of motives, not to mention copious clues that allow you (if you so desire) to ferret out the solution along with Hammish. However, the author doesn't grab you by the hand and lead to you the conclusion, you either arrive there of your own volition or are pleasantly surprised by the outcome. A wonderful balance of characters, plot, and action, this book is one that really makes the series what it is. Any cosy reader is sure to enjoy this novel and most of the others (particularly the later ones) in the series.

Published by Thriftbooks.com User , 15 years ago
What is there to say about finishing a Hamish Macbeth mystery? You've had a delightful read, and the good news is another one sure to follow.

We Knew It Couldn't Be a Perfect Husband ...

Published by Thriftbooks.com User , 20 years ago
When the Domestic Goddess moves to town, she not only weasels people out of their family heirlooms, she attempts to abolish slovenliness, high cholesterol and smoking - offering help where it is not wanted. She and her not-so-perfectly plump hubby open a low-end bed and breakfast, and Trixie continues to stir the plot of discontent. Constable Hamish MacBeth doesn't seem surprised when her body is inconveniently discovered. Once again the under-ambitious MacBeth annoys headquarters and the lovely Priscilla, as the red herrings mount in number and the clues point in different directions. The Hamish MacBeth books are light fare -with extremely clever writing, characterization that can only be inspired, and a sense of place set out so well the reader feels transported. I highly recommend all the books in this series.
Copyright © 2020 Thriftbooks.com Terms of Use | Privacy Policy | Do Not Sell My Personal Information | Accessibility Statement
ThriftBooks® and the ThriftBooks® logo are registered trademarks of Thrift Books Global, LLC