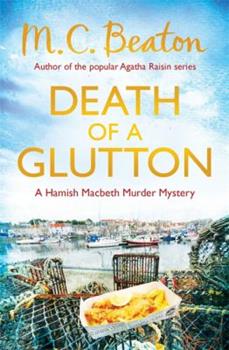 Death of a Glutton (Hamish Macbeth 08)

(Book #8 in the Hamish Macbeth Series)

This description may be from another edition of this product. A greedy glutton meets a gruesome end in the latest Hamish Macbeth mystery. When the woman is found dead--and an apple stuck unceremoniously in her mouth--Macbeth has to postpone his wooing of the...

Published by Thriftbooks.com User , 17 years ago
I really enjoyed this book. Grant it we didn't get too much of the eccentric villagers in this one, but we still had Hamish. And he is his usual self here. Murder occurs at his beloved Priscilla's hotel when a party of people from a dating agency are in residence. The woman who is murdered is particulary odious. She's a huge, fat woman with terrible table manners, and it's almost a relief to everyone when she is found dead. Hamish needs to solve the murder in spite of Blair's incompetence, and he manages to put everything together to do that. Again, the book is totally carried by Hamish. What a character he is!

Published by Thriftbooks.com User , 18 years ago
Quirky, funny and fast moving, with a bit of revolting sense of humor on part of Petra's eatting habits, this is a good fast read, that will satisfy those who love mysteries, and those who enjoy a bit of a good humor now and then.The only draw back is the amount of characters introduced. I had a bit of a hard time remembering who's who, but once I got into the story it all made sense.I appreciated the fact that by the time the book ended and the guilty was revealed I wasn't saying "who's that?"Great read, M.C Beaton fans must dive into this one.

Death of a Glutton

Published by Thriftbooks.com User , 19 years ago
"Death of a Glutton" is the eighth Hamish Macbeth mystery by M.C. Beaton set in the Scottish Highlands town of Lochdubh. An exclusive dating service, Checkmate, is having some of their members meet at the Tommel Castle Hotel which is owned by Colonel Halburton-Smythe, father of Priscilla, of whom Hamish is very fond. The dating service is owned by two women, Maria Worth and Peta Gore. Peta is a terrible glutton, eating everything in sight, and making people so mad that they think of ways to get rid of her. When she is found dead with an apple stuck in her mouth, it is up to Hamish to find the murderer. As usual, he upstages Inspector Blair from Strathbane. I am reading these novels in order, and I think that this is the best one to date. It is highly recommended.

Lots of quirky characters gathered at the manse.

Published by Thriftbooks.com User , 19 years ago
DEATH OF A GLUTTON is great fun. The glutton is immensely repulsive, and by the time the death occurs, you'll be ready to commit the murder yourself! I really like Hamish Macbeth more and more, and there's a fun interplay between Hamish and Priscilla. But I'm reading the series out of order, so I get confused by their on again/off again relationship. And that's a truly interesting element, so do try to read them in order. (I believe this is number 8 in a series that starts with DEATH OF A GOSSIP.) At 168 pages, this is a good, quick read -- short and a lot of fun.

Published by Thriftbooks.com User , 21 years ago
Well, perhaps not exactly a diet revolution, but even the reader will want to be the one to murder this disgusting glutton. Ms. Beaton once again weaves her highland magic, gathering together some real characters, killing off the figure who has absolutely no redeeming qualities, and letting the reader chase all the red herrings as Police Constable Hamish Macbeth (ever unambitious, ever the mooch, extremely unlucky in love and always in trouble with headquarters) takes us along for the ride. It is summer in the highlands of Scotland, and beautifully etched by the author, who sketches the characters with the same even hand. Delightful formula, but never exactly predictable.
Copyright © 2020 Thriftbooks.com Terms of Use | Privacy Policy | Do Not Sell My Personal Information | Accessibility Statement
ThriftBooks® and the ThriftBooks® logo are registered trademarks of Thrift Books Global, LLC