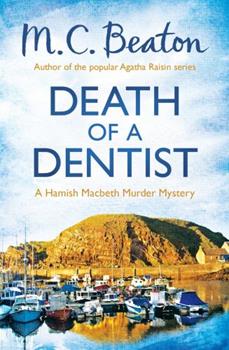 Death of a Dentist

(Book #13 in the Hamish Macbeth Series)

This description may be from another edition of this product. A blinding toothache sends Hamish Macbeth 120 miles out of Lochdubh to the dentist Frederick Gilchrist, only to find him dead. Since everyone is pleased the dentist is deceased--patients, several...

This Series is a Delight!

Published by Thriftbooks.com User , 17 years ago
This is a really strong entry in the Hamish Macbeth series. In it we see a dentist from the neighbouring village of Braikie get murdered. He was apparently not a very good dentist, and was rather fond of "drawing the tooth" rather than repairing it, but Hamish has an incredible toothache, and needs it taken care of right away. He goes to this dentist and finds him dead in his chair. As he delves into the life of Dr. Gilchrist, he finds angry husbands and jilted lovers galore in his past. The problem is not who has the motive, but which one. Hamish sets out to find the murderer in his unpreposessing, but charming way. I really like this series. The people from the sleepy little village of Lochdubh and it's neighbouring villages are eccentric and delightful. It's always fun to see what they're up to next. My personal favourite is the fisherman with the nagging wife - Archie Macleod.

"DEATH OF A DENTIST IS DELIGHTFUL!!!!!

Published by Thriftbooks.com User , 20 years ago
Another good one by M C Beaton. I have read 10 of the Hamish Macbeth series, all have been good but I think this one might be one of the best. As usual Hamish is caught in the middle of a murder and then guess what---a second murder-----guess who finds both bodies? Beaton has provided plenty of good characters to go with Hamish and it make for a good light read. It won't scare you to death or cause you do loose sleep from fright but it is good. Hamish has to fight the bad Inspector Blair as always. I liked the part of the Smiley Bros. Could they make moonshine and be killers too???? How about Kylie, pretty but has bad, bad boy friends. A surprise in the end, many twist and turns. Priscilla finally shows up again, will they get back together???? Beaton leaves enough to let you know they will be more forth coming.

Published by Thriftbooks.com User , 21 years ago
Once again M.C. Beaton kills off the least liked person for miles around, then turns the ever unambitious Constable Hamish out to solve the crimes, despite the roadblocks of the nasty Chief Inspector Blair -- the boss we all love to hate. The Honorable Hamish meets up with a beautiful hacker and into the police computer they travel. Solving a myriad of other crimes in pursuit of the Dentist killer, Hamish MacBeth, the charming and ambitionless Highlands police constable, plods through snow, sleet and perverse characters, getting himself battered and bruised both physically and emotionally. Hamish, Seeker of Peace and Quiet, finds himself dashing about the Highlands in the capricious pre-Christmas cold of the Highlands, disregarding instructions from headquarters, solving robberies, tracking bootleggers, investigating two murders, encumbered by a surfeit of beautiful women together with a few compromising positions. Davina Porter does a much better job on these tapes, evening out the highs and lows of her voice.

Another Home-Run for Beaton!

Published by Thriftbooks.com User , 23 years ago
This latest installment of M.C. Beaton's Hamish MacBeth series our hero suffers, perseveres and triumphs in his usual hysterical fashion. Set against the backdrop of the Scottish Lochdub, Hamish's perils begin with a woeful toothache and a lonesome heart. Beaton has brought back our hero, the hated Blair, the lazy Anderson and all the quirks of a quiet Scottish village. This time Hamish has a myriad of surprises to contend with. But he does it in rare fashion and without his beloved Priscilla! Always delightful, intriguing and easy to read, with Death of a Dentist Beaton has managed to combine humor, love and angst, thrills, spills and chills!

One of the best of a great series

Published by Thriftbooks.com User , 24 years ago
Beaton has outdone herself in this latest of a marvelous series of Hamish Macbeth mysteries. Her characters leap off the page, the atmosphere is vivid, and her prose has reached new heights. I re-read the sentence about "Duty" about forty times. It belongs in Bartlett's. Irrespective of the plot, which is a good one, this is just a plain old-fashioned darn good read from end to end. Bravo
Copyright © 2020 Thriftbooks.com Terms of Use | Privacy Policy | Do Not Sell My Personal Information | Accessibility Statement
ThriftBooks® and the ThriftBooks® logo are registered trademarks of Thrift Books Global, LLC