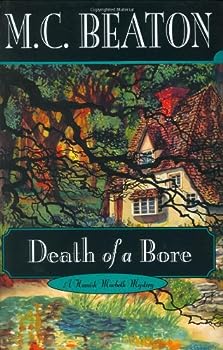 Death of a Bore (Hamish Macbeth Mysteries, No. 21)

(Book #20 in the Hamish Macbeth Series)

This description may be from another edition of this product. From the author of the Agatha Raisin television series... Death of a Bore: A Hamish Macbeth Mystery Minor writer John Heppel has a problem--he's a consummate bore. When he's found dead in his cottage,...

THIS SERIES GROWS ON YOU!

Published by Thriftbooks.com User , 14 years ago
I guess, as I found by reading a couple other reviews here, that this is about the 21st book in this series. I just grab them off the library self as I get to them so am not at all sure which book follows which book. What is nice though, is that unlike some other "series books," you really do not have to read them in order, as each is a story which can stand alone. There are many reoccuring characters to be sure, but Beaton always manages to introduce another set of quirky highlnd folks in each of here Hamish books. In this work, Death of A Bore, Hamish is faced with another murder (of course) and this time it is a newly arrived "famous" author who offers writing lessons, for a price, to members of the local area. The author is indeed a bore, actually an obnoxious twit, and by being so, there is no lack of suspects when he is found murdered. We continue to follow Hamish's love life, what there is of it, and continue to follow some of the wonderful folks that inhabit his world. The plot is pretty simple, but, as always, fast paced and interesting. This is one of those series that grow on you the more books of it you read. Picking up a Hamish Macbeth mystry is sort of like picking up an old friend. Highly recommend this very intertining book and this intertaining series.

Published by Thriftbooks.com User , 16 years ago
Scottish cop (constable on patrol) Hamish Macbeth has another murder on his hands. A successful, but unfeeling author by the name of John Heppel is killed on Macbeth's turf. At a session for hopeful writers, Heppel insulted a group of would be authors and made a lot of enemies. Any of the scorned would have liked to kill the man because of the despicable way that he ridiculed their work. Hamish can't believe any of his fellow villagers could do such a dastardly deed. He works hard to find the real killer and hopefully clear any of his villagers of the crime. This is a really good series and filled with the delightful aura and appeal of Lochdubh, a small Scottish town where everyone knows one another.

Another homerun for M.C. Beaton

Published by Thriftbooks.com User , 16 years ago
This is the twenty-first in a series of wonderful mysteries featuring the detective work of small town, Highland Scottish detective Hamish Macbeth, P.C. In this book, Hamish's life is troubled by a new arrival in the town, a boorish writer whose truest love is himself. But, when he is suddenly found dead, suspicion falls on citizens of the town. It's a sure thing that the Strathbane detectives will not get to the bottom of this thing, so it is up to Hamish to save the day, and bring a murderer to justice. This is another homerun for M.C. Beaton (pseudonym of Marion Chesney). This book has all of the charm of the earlier books, staying in small town Scotland, and involving all sorts of interesting and quirky characters. Overall I thought that this was a great book, and a great mystery. If you like mysteries, or are merely interest in the Scottish Highlands, then you must get this book!

It is certainly too long between Hamish Macbeth mysteries!

Published by Thriftbooks.com User , 16 years ago
This is a truly wonderful series, and it remains fresh time after time. It always seems too long between books for me. Hamish is definitely my favourite copper, maverick though he may be. In this book we have a published writer who wants to hold a writing class in Lochdubh. Much to Macbeth's surprise a lot of villagers want to take this course. Macbeth goes to the first meeting to see what all the fuss is about, and finds out that the writer is an insufferable bore. Not only that, he gives Macbeth a bad feeling. Sure enough Macbeth's intuition is right, and the boring author is found murdered in his cottage. Macbeth has to wonder if any of his village friends was responisble for it. But he uses his not insubstanial brain cells, and manages to solve the crime. What a wonderful treat these books are! Ms. Beaton is truly the queen of the "Black Comedic murder". Now I can't wait until the next Hamish Macbeth mystery.

A Walk in the Highlands

Published by Thriftbooks.com User , 16 years ago
I wholeheartedly agree with a fellow reviewer: It is hard to believe this is the 20th book in the Hamish Macbeth mystery series. It is hard to believe because M.C. Beaton's writing remains crisp and engaging throughout the entire series. In fact, her writing is so compeling that before you know it, you find yourself wanting to jump in the Range Rover alongside Hamish to drive to Cnothan to protect to the angry group of Highlanders from the tomfoolery of Hamish's superior officers. In "Death of a Bore", just as in "Death of a Scriptwriter", M.C. Beaton gives the reader a wickedly real view of the artifical lives of the employees in the television industry. There are times when reading the book is like having a good gossip with a close friend over tea and toast. The images are so vivid that one cannot help but wonder whether M.C. Beaton, herself, is not writing from experience and her own desires to kill off scriptwriters after she worked with the entertainment industry in the making of the Hamish Macbeth television series for the BBC. Like other books in the series, Beaton's "Death of a Bore" is filled with humor, especially when the village ladies, led by the vicar's wife, Mrs. Wellington, once again attempt to get Hamish married off. All in all, the book is a good read. It teases your intellect with a mystery. It delights your sensitivities with satire as Hamish observes the world outside his beloved Highland village. The book tickles your funny bone when the village ladies are intent upon managing Hamish's life when he believes he is safely at home.
Copyright © 2020 Thriftbooks.com Terms of Use | Privacy Policy | Do Not Sell My Personal Information | Accessibility Statement
ThriftBooks® and the ThriftBooks® logo are registered trademarks of Thrift Books Global, LLC