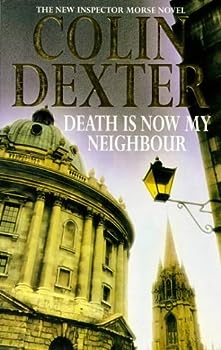 Death Is Now My Neighbour

This description may be from another edition of this product. Why would a sniper shoot suburban physiotherapist Rachel James as she sips her morning coffee? Inspector Morse's hunt for answers kicks off with a tabloid journalist, winds through the strip clubs of...

A mystery with wit, suspense and humanity.

Published by Thriftbooks.com User , 20 years ago
Colin Dexter is a masterful writer who has done a magnificent job in developing the characters of Chief Inspector Morse and Sergeant Lewis. I have truly enjoyed watching them develop in his novels over the years and have marveled at the friendship that has developed in these characters of such opposite demeanor.In this most fascinating mystery, Morse faces his own mortality in some rather surprising ways while trying to resolve a murder that appears to have been a mistake. Blackmail, tabloid journalism and the secrets of Oxford dons all weave together in ways that ultimately reveal a devious but logical solution. One of the author's finest novels -- highly recommended.

The best Inspector Morse book yet!

Published by Thriftbooks.com User , 23 years ago
I'm surprised all reviewers haven't given this book 5 stars. To my mind, it is the deepest Morse book. It is only secondarily a murder mystery. Primarily, it is an exploration of human weakness and frailty.Both Morse and (to a lesser extent) Lewis have developed quite a bit as personalities. I'm very much looking forward to their next case.

Published by Thriftbooks.com User , 23 years ago
Those who enjoy Colin Dexter's 'Inspector Morse' novels will completely enjoy this latest novel starring, those two deep and colorful characters, Morse and Lewis. Readers will enjoy the added tension and humor of Morse dealing with a life changing illness as well as murders in Oxford. This is Dexter's best novel revealing more depths to Morse -including his first name- and a tight, interesting and baffling mystery! I can't wait for the next one!

Morse and Lewis resolve more than a crime

Published by Thriftbooks.com User , 24 years ago
If Inspector Morse and his faithful Lewis are involved, crimes and criminals are usually ferreted out and solved between pub stops. In this latest work, Morse must come to grips with a life-threatening illness and his own aging. All in all, that subplot was more interesting than the slowly revealed, twisting, rather soap-operatic crime plot concerning the Oxford dons. Morse fans will only be scratching the surface if they can't detect the subtle change in his personality brought about by his illness. The fact that he finally reveals his given name is a clue! Colin Dexter is a masterful storyteller; Morse encounters and faces the same everyday problems those of us with less brilliant minds must also face. He ages; he becomes ill; he survives; he solves and triumphs. Although this is not Morse's best case, it shows Dexter's ability to create an original story each time, and it leaves us hoping to meet Morse and Lewis again, as always...

Published by Thriftbooks.com User , 24 years ago
This series defies the natural tendency of detective series to peter out under the pressure of producing more and more adventures of their heroes. Here Inspector Morse and Lewis each grow a little and reveal more of their character, all while solving a puzzle as neat as any you'll find. As long as Oxford Dons keep being murdered and murdering, Morse and Lewis will prosper.
Copyright © 2020 Thriftbooks.com Terms of Use | Privacy Policy | Do Not Sell My Personal Information | Accessibility Statement
ThriftBooks® and the ThriftBooks® logo are registered trademarks of Thrift Books Global, LLC