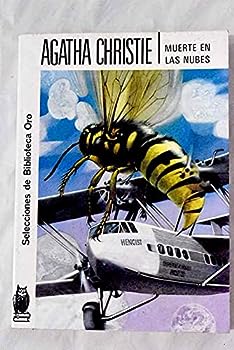 Muerte En Las Nubes or Death in the Clouds

(Book #11 in the Hercule Poirot Series)

Hercule Poirot must solve a perplexing case of midair murder in Death in the Clouds when he discovers that the woman in seat two of the airborne aeroplane he's traveling on is quite unexpectedly--and... This description may be from another edition of this product.

Published by Thriftbooks.com User , 18 years ago
A murder on an aircraft? Right, and within just a few feet of detective Hercule Poirot! I haven't read many books by Christie, but I knew this was going to be a good one...And it was. It goes through a female passenger being murdered on a aircraft from Le Pinet, under everyone's noses unnoticed. Poirot is air-sick on the plane and is called upon the investigation. The mystery unfolds page by page, introducing new characters--suspects-- chapter by chapter. There were many varius suspects, and they never narrow down. There was a bit of a twist in the last few chapters of the story, well, for Poirot and another in the last chapter for the readers, yet it makes sense and draws in a nice ending. This is a definite page turner and a great read when you think you're bored, because with Christie's mysteries, you never know what's going to happen.

Death In The Air

Published by Thriftbooks.com User , 20 years ago
Do you want to read a good book with twists and turns to the resolution? Do you want to pick up a book and not put it down until you are finished? Death in the Air by Agatha Cristie is the perfect match for you. It is a classic mystery published in 1977. I thought Death in the Air was an average book. At the beginning of the book she introduces too many characters at one time. I also did not like that every so often throughout the book she used French words. For example, "...I do not wash out- what a term, mon Dieu!" (Pg. 55) I enjoyed that every character had a different personality and the murderer ended up to be someone you would have never suspected. After reading this book, I would conclude that it was very well written, and I would recommend this book to anyone who enjoys mysteries.

Published by Thriftbooks.com User , 20 years ago
Poirot is flying for the frist time. Trying to sleep like the lady in row one. Only unlike Poirot she dose not wake up.So stats Death in the Air.

Published by Thriftbooks.com User , 21 years ago
Madame Giselle, a rather unlikeable woman, is apparently shot with a poison dart from a blowpipe. This happens in plain sight of thirteen passengers on a plane flying from France to England. How did the killer produce a blowpipe, place it to his/her lips, and shoot a poison dart across a crowded passenger compartment without being noticed? Where did the wasp come from? How could Hercule Poirot, the greatest detective of all times (if you don't believe it just ask him), sleep through a murder committed right under his nose?Obviously it couldn't have happened that way. But if not, how did it happen? And who did it? Almost everyone on board has a motive to kill Madame Giselle, and almost eveyone on board does a little lying before the mystery is solved. Poirot sorts through the clues, unmasks the liars, and eventually figures out not only whodunnit, but also howdunnit and whydunnit. I don't gamble, but I wouldn't be gambling if I wagered that you, the reader, will not unravel the mystery. I thought I had finally solved one ahead of Poirot when Christie artfully pulled the rug out from under me. Curses, foiled again!

Published by Thriftbooks.com User , 22 years ago
This was my very first Agatha Christie book, so naturally, I was interested to know how she writes. It had a slow start, but once a women was found dead the story begins to unfold. It's interesting to read about the curious detective, Hercule Poirot, and his views on the case, which are extremly different from those of the police. His method of finding the killer is exactly opposite of what Inspecter Japp thinks: All people on the plane are guilty until proven inocent. Aided by his friends Jane Grey, the hairdresser, and Norman Gale, the dentist, and a colorful cast of characters, this book is definitly a must for mystery lovers!
Trustpilot
Copyright © 2022 Thriftbooks.com Terms of Use | Privacy Policy | Do Not Sell or Share My Personal Information | Accessibility Statement
ThriftBooks® and the ThriftBooks® logo are registered trademarks of Thrift Books Global, LLC