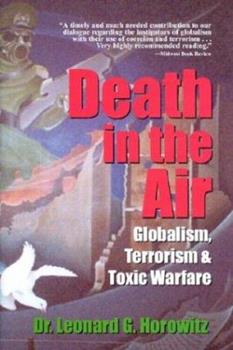 Silently killing us, our family and friends, the global plagues and toxic menaces are here, yet where are you? If you are like most Americans, you've become distracted by pastimes, passions, pleasures... This description may be from another edition of this product.

Death in the Air

Published by Thriftbooks.com User , 20 years ago
How many have a feeling that something is wrong? Something that you just can't put your finger on, but you know something is wrong. Your sick, your spouse is sick, your kids have behavioral problems or they are sick, a close relative or friend is sick. Everyone knows someone with cancer and if your over 40 you cannot remember knowing anyone sick or having cancer when you were a kid.What if someone was to offer proof that there is something wrong and there is a reason why we are all sick?This book will stop you in your tracks and (if your not careful) make you think. Finally an explanation, so interesting and compelling I couldn't put it down. Didn't (and still don't) want to believe that something this sinister is occurring.With the tenacity of a trained researcher, Dr. Horowitz has carefully constructed a framework of evidence, which, if only taken half seriously, provides plausible reasons surrounding the state of our world and health.

Published by Thriftbooks.com User , 20 years ago
Writers who posit conspiracy theories are always fighting an uphill battle, because at least in the US most people are satisfiedwith their lives and don't really want to know the truth. After all,it might make them question their reality, it might knock them a bitout of their comfort zones. You can hear them saying, "why, that can'tbe possible, these kinds of crimes couldn't be covered up." Thusconspiracy researchers have to present an enormous amount of documentationto be given any credibility at all. Yet once again, Dr.Horowitz is morethan up to this challenge. Dr. Horowitz has contended for years that the main agenda of theglobalists, the New World Order crowd, is to reduce the population ofthe planet by as much as 50%, and make money off of it at the same time. Referring to fellow conspiracy researcher David Icke, Horowitz discussesthe NWO agenda in terms of the Hegelian dialectic, which is thethesis/anti-thesis/synthesis accounting for history's evolution. Intoday's world this is better termed "problem-reaction-solution." That is,the people in power create a problem, which causes the public to demandaction, at which point the NWO rolls out their already conceived"solution." The sub-title of "Death In The Air" provides a good foundation to summarize this long, but highly readable, incredibly well-documentedbook: "Globalism, Terrorism, & Toxic Warfare." The globalists are ofcourse the money masters - Dr. Horowitz focuses on the Rockefellers,who have clearly wielded enormous power, owning many of the largestoil companies, but also either serving in government themselves, orputting cronies like Henry Kissinger into the seats of power in bothgovernment and business. As for terrorism, Dr. Horowitz provides numerous examples ofintentional testing of chemical and biological substances on peoplesthroughout the world. He always names names, and provides precisedates and locations. For example, on p. 81 he discusses how theCIA-funded Evergreen Helicopters sprayed millions of gallons ofchemicals both in the US and abroad. This form of government-sponsoredterrorism is often directed at minorities, and many Native Americansin Arizona became seriously ill due to these intrusuions. Another example of terrorism (and toxic warfare) thoroughlydocumented in "Death In The Air" are the two infamous CIA mind-controlprojects, MKULTRA and MKNAOMI. It is widely known that former Nazis werebrought to the US, having received no punishment for their heinous crimes,to teach US intelligence officials the techniques they learned from theirtorturings. By far the bulk of "Death In The Air" is devoted to exposing theNWO's toxic warfare campaign, ironically often termed "non-lethal"only because that term actually means that "only" a smaller percentage of death than "lethal" warfare occurs! Never mind the harm done. Andwhat Dr. Horowitz does better than any researcher I have ever read is that he presents the best evidence of all when trying to prove thatviruses

Published by Thriftbooks.com User , 20 years ago
I found the book to be factual and complete withdocumentation. The information in this book isextreme and alarming to most people whom I've presentedwith the truth, but the truth about our world governmentmust be exposed. Dr. Horowitz is a very brave man.

Dr. Horowitz reseaches his way further into the Truth!

Published by Thriftbooks.com User , 21 years ago
This book is very disturbing to some, and enlightening to others, but references are listed. The purpose of the book to open people's eyes to the possibility that not all is well with our government. Chemical and biological attacks may have already been perpetrated agains the American people, but not necessarily by terrorists. Dr. Horowitz very calmly states the case of global de-population and how this is being achieved right under all of our noses. Medications, Innoculations, Poison in the air...etc., are all exposed in this book. You'll think twice about taking a prescription medication after you read this. You'll also wonder if that flu shot is safe, or toxin free. What can I say, it's an important book. It even addresses all the "contrails" people see in the sky almost daily. These are not contrails. Contrails do not turn into puffy clouds. These are "Chemtrails" which have among other toxins, heavy metals that are toxic to animal life. Sometimes, the truth hurts. More and more facts are stacking up proving a theory of genocide.

The links between globalism and genocide

Published by Thriftbooks.com User , 21 years ago
Death In The Air: Globalism, Terrorism And Toxic Warfare is a timely and much needed contribution to our present national dialogue. Leonard Horowitz surveys and explains the widespread abuses in the field of public health; the links between globalism and genocide; new concepts in "non-lethal" biological and chemical warfare; the controversial "chemtrails" issue; advances in electromagnet methods of population management; the documented targeting of African Americans for genocide by intelligence organizations; and the instigators of globalism with their use of coercion and terrorism in the world today. Informative, controversial, iconoclastic, Death In The Air is very highly recommended reading offering a provocative and thoughtful perspective on the political, economic, and cultural conflicts active in the world today.
Trustpilot
Copyright © 2022 Thriftbooks.com Terms of Use | Privacy Policy | Do Not Sell or Share My Personal Information | Accessibility Statement
ThriftBooks® and the ThriftBooks® logo are registered trademarks of Thrift Books Global, LLC