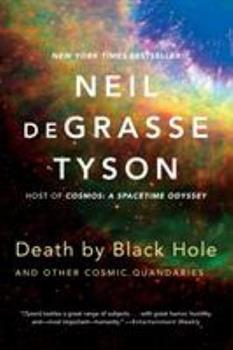 Death by Black Hole: And Other Cosmic Quandaries

Loyal readers of the monthly "Universe" essays in Natural History magazine have long recognized Neil deGrasse Tyson's talent for guiding them through the mysteries of the cosmos with clarity and enthusiasm. Bringing together more than forty of Tyson's favorite essays, Death by Black Hole explores a myriad of cosmic topics, from what it would be like to be inside a black hole to the movie industry's feeble efforts to get its night skies right. One...

Gould for the Common Man?

Published by Thriftbooks.com User , 13 years ago
Neil deGrasse Tyson is the current director of the hayden Planetarium and an astrophysicist with the American Museum of Natural History. His picture shows a portly African-American with a wry smile, wearing a vest with astonomical figures perhaps cut from a wizard's robe discarded by Hogwarts. Most likely half of America knows better what he looks and sounds like than I do, since he appears frequently on TV, on the Daily Show and various Fox blathergrounds. I heard him talking about comets for a few minutes on my car radio, and found him very quick, very amusing. A comparison with Stephen Jay Gould is almost inevitable. This book, like most of Gould's, is a selection of Tyson's columns for the magazine Natural History. Tyson has a lighter touch and will be easier going for people without much background in science. He is nowhere near as encyclopedic or allusive as Gould, which will come as a relief to many. Gould wrote, increasingly so over the years, as a Harvard Don, which all the rhetorical flourishes of a man who expects his readers to be very erudite. The danger of such writing is pomposity and condescension. Since I almost became a Harvard Don myself, I have a high tolerance for pomposity, but I find Tyson's writing style delightfully relaxed. Tyson's subject in Death by Black Hole is the astronomical zoo of gravitationally caged objects - stars, planets, comets, asteroids, and Anomalous Flying Objects - in what we still call the Universe, although the name seems less and less appropriate. Tyson back-fills as needed with tidbits of history but his central purpose is to make us acquainted with current observational astronomy. People who "already know all that" will enjoy his witty delivery, while the rest of us will learn quite a lot, quite painlessly. One of the Identified Flying Objects Tyson describes is the asteroid Apophis, which ought to be of maximum interest for anyone under 40 years old. Tyson writes: "On Friday the 13th of April, 2029, an asteroid large enough to fill the Rose Bowl as though it were an egg cup, will fly so close to Earth that it will dip below the altitude of our communication satellites ...If the trajectory of Apophis at close approach passes within a narrow range of altitudes called the Keyhole, the precise influence of Earth's gravity on its orbit will guarantee that seven years later in 2036...the asteroid will hit earth directly, slamming in the Pacific Ocean between California and Hawaii." You knew that, didn't you, and you've already made reservations for the observation grandstand on Mt. Whitney? What a show! But Tyson continues: "The tsunami it creates will wipe out the entire west coast of North America, bury Hawaii, and devastate all the land masses of the Pacific Rim." Oops. I'd better warn my grandchildren to sell my house in SF before it's too late. Tyson doesn't mention it, but there's an upside to Apophis -- no need to worry about global warming after all. In fact, Tyson is not all levity about

Thank supernovas for your existence instead of your mother...

Published by Thriftbooks.com User , 14 years ago
No need for a long review with all sorts of quotes... Death by Black Hole is a great book. Cosmology explained with lots of humor and sarcasm in between. I don't read many books but even I laughed out loud frequently because of his perspective of things in the cosmos. Even most of the (technical) equations are explained in easy to read language. I really enjoyed reading this book and will purchase more of his work as it becomes available.

Entertaining and educational at the same time

Published by Thriftbooks.com User , 14 years ago
Death by Black Hole by Neil Tyson is among the best astronomy related books to appear for some time. In the best traditions of Carl Sagan, another popularizer of things cosmolgical, Tyson does a masterful job at explaining often drab and uninteresting topics in a most excellent manner. Death by Black Hole reminds me of book written by Isaac Asimov nearly thirty years ago, A Choice of Catastrophies. Death has the benefit, however, of thirty years of new information about the cosmos. Consisting of 42 articles that originally appeared in Natural History, Death by Black Hole covers a huge range of topics; everthing from basic astronomy subjects to sophisticated physics topics. The most interesting chapters, in my opinion only are Chapt 7, Planet Parade; Chapt. 11, Antimatter Matters; Chapt 17, Colors of the Cosmos, Chapt 23, Goldilocks and the Three Planets; Chapt 30, Ends of the World; and Chapt 41, Holy Wars. Actually, there isn't a bad read in any of the 42 chapters, but these just seem to stand out. Carl Sagan would have enjoyed Death by Black Holes....maybe he has read it where ever he is at. An excellent book to add to your library.

Published by Thriftbooks.com User , 14 years ago
Get out your crayons. Make a Sun in the sky. If it is like every Sun you have colored since you were a kid, it is a happy yellow ball. "And I don't care what else anyone has ever told you, the Sun is white, not yellow," writes astrophysicist Neil deGrasse Tyson in _Death by Black Hole and Other Cosmic Quandaries_ (Norton). "If the sun were yellow, like a yellow lightbulb, then white stuff such as snow would reflect this light and appear yellow - a snow condition confirmed to happen only near fire hydrants." How do we keep getting this wrong? Why do people think there is no gravity in space, or that what goes up must come down? How come total solar eclipses seem rare, but actually happen every couple of years? And especially important, how do we obtain those data to show us that these assumptions are wrong? Furthermore, what does happen when you step into a black hole, or into a hole that goes clean through the center of the Earth? What is going to happen when the Andromeda galaxy hits our own Milky Way? ("Gas clouds would slam into each other; stars would be cast hither and yon.. our planet could get flung out of the solar system... That would be bad.") And it is going to happen, but a couple of billion years before that happens, the Sun will explode and die and vaporize all the contents of the Earth. But as Tyson observes, "I'd say we have more pressing issues of survival before us." Tyson's book consists of chapters that appeared as columns in _Natural History_ magazine. There is death and destruction all through it, and yet he writes with buoyant optimism and humor, making even the strangest findings of astrophysics accessible. We have a vast scientific and intellectual tradition, but we have fought against the ideas of one scientist after another who would give us a true picture. At the end of the chapter, Tyson reflects: "What are the lessons to be learned from this journey of the mind? That humans are emotionally fragile, perennially gullible, hopelessly ignorant masters of an insignificantly small speck in the cosmos. Have a nice day." The humor has the ring of truth, but Tyson is no pessimist. We may be slow to learn, but we do know some darned interesting stuff, and his presentation of it, touching on what we know, how we know it, how the universe and the solar system got started and are going to end, and what it all means to humans, is full of admiration for the scientists who got us this far. We are clever, but we are goony. A few years ago, Tyson got a call from a marketing executive who thought it would be a good idea to project her company's logo onto the Moon, and wanted to know how best to do this. Tyson slammed down the phone, but "... called her back and politely explained why it was a bad idea." Tyson's final chapters have to do with science and religion: "The claims of science rely on experimental verification, while the claims of religion rely on faith. These are irreconcilable approaches to learn

Death by Black Hole: And Other Cosmic Quandaries Mentions in Our Blog 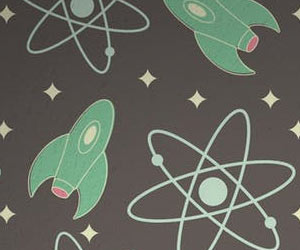 Celebrating Black History Month: 14 Black Scientists Who Changed the World
Published by Beth Clark • February 20, 2019
Black history IS history, and Black History Month is a time to celebrate both contemporary and traditional black history, beginning with a nod to Dr. Carter G. Woodson, the scholar who established what we now celebrate in an effort to collect, document, and backfill all of the history that was missing because it never made it into the books. Below are 14 scientists, mathematicians, and engineers who have made significant contributions to furthering the human race for people of all color.
Read Article
Copyright © 2020 Thriftbooks.com Terms of Use | Privacy Policy | Do Not Sell My Personal Information | Accessibility Statement
ThriftBooks® and the ThriftBooks® logo are registered trademarks of Thrift Books Global, LLC