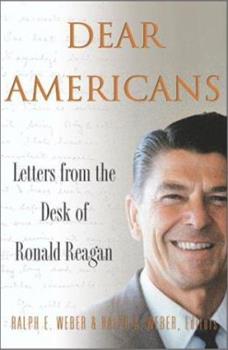 Dear Americans: Letters from the Desk of Ronald Reagan

by Ralph A. Weber

Organized chronologically, this collection of letters from Ronald Reagan to his constituents during his eight years in the White House shares the former president's political convictions, religious beliefs, and human concerns.

Published by Thriftbooks.com User , 17 years ago
All the letters published in this wonderful book were handwritten by President Reagan, typed by secretaries and mailed to the correspondents. The correspondence includes letters to private citizens, famous and obscure lifelong friends, and heads of state. They reveal a noble spirit, a kind and decent man who took a personal interest in the lives of ordinary people. The book starts with an introduction and editorial notes. The correspondence is divided into chapters for every year from 1981 to 1988/1989. Each of these aforementioned chapters has an introduction of the year concerned, discussing the major evens of that year, thus providing a historical background to the themes of the letters. The correspondence displays a tapestry of Ronald Reagan's wisdom, resolve, decency, optimism, humanity and humour in his replies to young people, unemployed workers, press columnists, Hollywood friends, Soviet leaders, sports figures, relatives of soldiers and critics of government policies. It shows his positive approach to the economy, his frequent frustration with the media and an obstructive Congress, and his determination to halt Soviet expansionism, to reduce taxes and to rebuild the military. Reagan's style was warm and down to earth and often gently humorous. Replies to his critics were factual and respectful. There are 14 black and white photographs that include pictures of Reagan with William Buckley, Michael Gorbachev, chief of correspondence Anne Higgins, personal secretary Kathy Osbourne and Reagan's young friend Rudolph Hines. Unlike the impression created by certain elements in the media at the time, Ronald Reagan was a highly intelligent man with a keen insight into domestic issues and international relations. Moreover he had the gift to translate those insights into language that everybody could understand. But most important of all, Reagan was wise. Besides being the Great Communicator, he was also the Great Correspondent as this volume demonstrates. What a lovely and admirable human being Reagan was. I also recommend the books When Character Was King by Peggy Noonan and Ronald Reagan: How An Ordinary Man Became An Extraordinary Leader by Dinesh D'Souza. God bless the memory and legacy of Ronald Reagan, the greatest president of the 20th century.

Deep in the heart of Ronald "Dutch" Reagan lived a

Published by Thriftbooks.com User , 17 years ago
truly warm and wonderful person and this book captures so much of his character! Only a sampling of the thousands of hand-written letters composed during his eight years as president; these documents give us an insight not only to a President and the issues of the times; but also an insight to the very human side of this remarkable man. Do not read this from a partisan point of view because it was not written for that purpose. The authors compiled this work to show the many facets of the man chosen for the highest office in the United States. His love of country, his love for his country's people, his fantastic sense of humor, his concern for every issue that passed his desk and his sincere desire to answer all who wrote to him in a clear and concise manner (from children to the aged), show the full picture of Reagan, the person, Reagan the President, Reagan the husband and father and Reagan the flag bearer for this country. You don't have to agree with him; you don't have to be Republican nor do you have to see him in any particular light. I believe that if you read his letters, you will find it both enlightening and fulfilling. I enjoyed and hope you will also.

Insight into the Character of Reagan from his own Words

Published by Thriftbooks.com User , 18 years ago
It turns out that Ronald Reagan, often derided for intellectual shortcomings, was a vociferous letter writer throughout his eight years in the White House. This collection pulls together in a single book, many of the letters he wrote on all varieties of subjects and to all manners of persons. There are letters to supporters, letters to opponents, letters to world leaders and letters to Americans who wrote either in support or critically. Most incredibly, there are letters Reagan wrote to a child with whom he maintained a "pen pal" correspondence throughout his time in Washington.These letters, many with handwritten additions or paragraphs were Reagan's personal correspondence, not edited or ghost written by speech writers or other advisors. They reveal a man who was not detached from either the day to day workings of his administration or the policy arguments the administration was engaged in. Many of the letters are touching or filled with humor. Many times I found myself chuckling. For example, when Reagan gently let down a boy who was hoping to receive federal cleanup funds because his mother had declared his room a "disaster area." Some have a hint of anger or defiance. Many of the letters are responses by Reagan to individual citizens who wrote to him critical of a certain policy. His replies were always polite and respectful of alternative opinions. But he seems to have made the effort to convince these people of their mistakenness. The letters reveal much about Reagan the man. The book is arranged in chronological order with an introduction written by the editors detailing each year of the administration and the main issues Reagan faced both personal and professional. In this manner the book reads like a memoir of Reagan's time in Washington. I do not intend to discuss whether Reagan was right or wrong in his views or his actions. Obviously, Reagan believed he was correct and his letters reflect this belief. Others certainly disagree and may well be right to do so. But it will be helpful to an understanding of Reagan and his times to put to bed the myth that Reagan was a scripted movie actor. These letters prove this is not so. History will be served if Reagan's opponents can criticize the actions he took or the views he held and not re-hash a phony mythology. I recommend this excellent collection to anyone, friend or foe, interested in Ronald Reagan and his times.

Published by Thriftbooks.com User , 18 years ago
Great insight into the heart and mind of a great American. The letters contained in this book illustrate Reagan's convictions, humility and sense of humor. His letters to ordinary citizens are the best - gracious responses to both complimentary and negative letters he received. Reagan's love for his country and his fellow citizens is evident throughout. This is a truly heartwarming read.
Trustpilot
Copyright © 2022 Thriftbooks.com Terms of Use | Privacy Policy | Do Not Sell My Personal Information | Accessibility Statement
ThriftBooks® and the ThriftBooks® logo are registered trademarks of Thrift Books Global, LLC