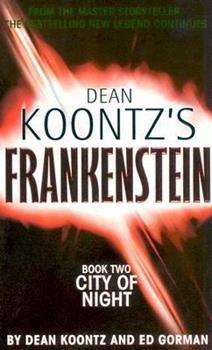 by Dean Koontz and Ed Gorman

Chapters: List of state leaders in 355, . Source: Wikipedia. Pages: 12. Not illustrated. Free updates online. Purchase includes a free trial membership in the publisher's book club where you can select from more than a million books without charge. Excerpt: 355 - body{behavior: url("/w/skins-1.5/vector/csshover.htc")} 355 ...More: http: //booksllc.net/?id=42525

Published by Thriftbooks.com User , 16 years ago
Another page turner from Dean Koontz! Just could not put it down, but was very frustrated by the ending! Just when I thought it was all going to 'kick off' he leaves you hanging. However I have managed to find out that his third book is out in July this year so I suppose it is not to long to wait. The reason that it is a little longer wait for his third book is because he is going it alone as he has found out that he does not 'colaborate well' (his words not mine!

Published by Thriftbooks.com User , 17 years ago
I've been a fan of Koontz' since 1988 when I read WATCHERS. This Frankenstein series is frustrating 'cuz I have to wait almost a year for it to end. I felt like that when the first Lord Of The Rings movie came out and I knew the other two were already finished, but I had to wait two years for that trilogy to end. These books of Koontz are like that. My other favorite Koontz book, out of the dozens he has written, is ONE DOOR AWAY FROM HEAVEN. Read the Frankenstein books. You won't be disappointed.

Published by Thriftbooks.com User , 17 years ago
When I finished Book Two and saw the third, and final, installment isn't due out until Summer, 2006, I almost cursed....not quite, but almost. :) How can I possibly wait an entire year to find out if the world is destroyed by the ghastly New Race, if Frankenstein is finally killed, whether the monster-becoming human Deucalion finds permanent peace within himself at long last, and whether Carson and Michael retire as cops and open a toy store together, while still hoarding their high-caliber weapons? The loose ends are causing me significant agony! For readers who have not yet immersed themselves in Koontz's Frankenstein trilogy, you of course will not understand my angst. Therefore, allow me to invite you to share my pain by joining me, along with the multitude of other readers who are smitten with this trilogy, in reading one of Koontz's finest edge-of-your-seat thrillers. The story picks up where Book One left off....with Frankenstein's two-hundred year old monster, who now calls himself Deucalion (Doo-`Cay-Lee-Un -- after the mythological Greek son of Prometheus who became the father of the renewed human race), plotting to destroy the eternally young Frankenstein, who now calls himself Victor Helios. The emotional tapestry woven between Deucalion and the other main characters provides a gripping backdrop to the upcoming Apocalypse between mankind (the Old Race) and Frankenstein's engineered super-creations (the New Race) who number in the thousands, have an insatiable desire to kill all humans in the most gruesome way possible, and are all going haywire in various and horrific fashion. I once again applaud Koontz's ability to draw me into each and every chapter....and then leave me hanging in breathless anticipation as he hops back and forth between the mini-plots of other characters. The only frustration I experienced during this unending sense of emotional foreplay was my overwhelming urge to read more about the often tender, poignant, haunted and sometimes brutal Deucalion....in this regard, Koontz's teasing left me frustrated. I fervently hope Deucalion plays a greater role in the final book, as he is indeed the Old Race's Champion, who should be paramount and center stage throughout the upcoming holocaust. My only other request would be that Koontz release Book Three no later than next week!

Published by Thriftbooks.com User , 17 years ago
I picked up this book on a lark. I'm a big Koontz fan from the beginning, but, like others, have strayed from reading due to work and home life. I was in an airport last week and wanted something to read on the way from Dallas back to D.C. I couldn't put the book down! When I got home, I continued to read, and finished the book the next night. Every page was a twist, every chapter a reason to read the next. I didn't read the first installment of this trilogy - I'm heading to the shore next week and it's the first thing I'm going to buy before I hit the beach. My family will learn to live without me until I finish that one........

Published by Thriftbooks.com User , 17 years ago
In the second of three novels dealing with ancient evil in contemporary New Orleans, Detectives Carson O'Connor and Michael Maddison are left realing from the discovery that Victor Helios, a billionaire scientist, was once Victor Frankenstein, and that his very first creation, now calling himself Deucalion, has come to the city to save the world. For Victor never stopped making new people--his terrifying "New Race." He has created what he THOUGHT was the perfect person...until things go wrong. The New Race, created to be loyal unto Victor and to not believe in God or any form of supersticion, begin having doubts. The New Race are designed not to kill unless ordered by their creator to do so; but their lust to kill (for they hate human beings) is becoming uncontrollable. And several members of the New Race are changing into unthinkable monstrocities, with the sole desire to destroy and wreck havok. As O'Connor, Maddison, and Deucalion race to stop Helios's evil plans, they must face the reality that they are too late: that events have been set in motion that may kill everybody in the city of New Orleans...and possibly the rest of the world. It's a corny idea, to be sure; but then, Koontz has never been afraid to go out on a limb. And, truthfully, only he could turn this ridiculous notion into a horror/suspense novel that's not only readable, it's right up there with his best. Co-written by Ed Gorman (another brilliant horror/suspense writer), "City of Night" picks up where the first novel left off, and will leave readers hanging on the edge of their seats for the final installment (which doesn't come out for another year, unfortunately).
Trustpilot
Copyright © 2022 Thriftbooks.com Terms of Use | Privacy Policy | Do Not Sell My Personal Information | Cookie Preferences | Accessibility Statement
ThriftBooks® and the ThriftBooks® logo are registered trademarks of Thrift Books Global, LLC