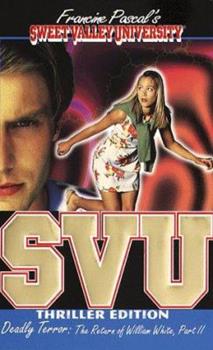 Published by Thriftbooks.com User , 17 years ago
Though it was tough believing the whole William White is back thing, I thought the book was a great read. It was suspenseful and funny at the same time.

Published by Thriftbooks.com User , 22 years ago
I get scared easily, so of course this one scared me. Will William White EVER die? I won't spoil it for anyone who hasn't read the book, but the ending had me sitting on the edge of my seat in anticipation!

Published by Thriftbooks.com User , 22 years ago
I must say, this book was very satisfying. In it, it seems like Liz falls in love with William again. He seems really nice, in the beginning. But later, after he kisses her in the Library basemant, he turns on her because she wants to take things a little slower. I stayed up 'till 12 last night, because i could not put this book down. You see, during this book, william is seeing a phyciatirst, Dr. Denby. In the book, you think that Dr. Denby is normal, ....alive.... But when liz tries to calm him down, when they are in the basemant, she suggests that she talks toDr. Denby. But little does she know that Dr. Denby crumpled, dead body is lying on William's closet floor. It is quite a fright for Liz, which starts them on a wild chase through thedark tunnels below the library. It is very freaky, and you don't want to miss it, even though Cyberstalker was really bad.

Published by Thriftbooks.com User , 22 years ago
To tell you the truth, I thought Deadly Terror would be no better than Cyberstalker. I expected it to drone on about Liz's virtual hallucinations (can you say yawn?) I absolutely despised Cyberstalker, quickly placing it on top of my Worst SVU Books Ever Written list. However, the continuation, Deadly Terror, completely made up for it. Once I finally let the fact that William White was actually alive sink in, the book graced me with a sense of fulfillment that I could not have enjoyed from Cyberstalker. It was full of surprises and subtle comedic quirks. I sometimes found myself laughing out loud as I eagerly turned the pages. Shockingly, I found myself growing more and more intrigued by the changed William White. I was impressed by his character, and, shamefully, I was secretly rooting he and Liz on. Naturally, those thoughts ceased nearing the end of the book. Towards the end there were many twists and turns that would stumble any reader. Overall,if Cyberstalker made you lose your lunch, don't worry. Deadly Terror more than makes up for it, guaranteed.

Published by Thriftbooks.com User , 22 years ago
I loved the book, to tell u the truth I love all of SVU books, I have been reading them since they started out with Swet Valley Kids, and I will keep on reading them till the end.
Copyright © 2020 Thriftbooks.com Terms of Use | Privacy Policy | Do Not Sell My Personal Information | Accessibility Statement
ThriftBooks® and the ThriftBooks® logo are registered trademarks of Thrift Books Global, LLC