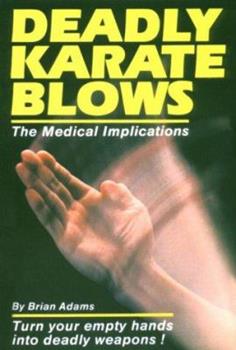 Author excerpt from books back cover: "The main interest of this book is the examination of the medical implications of a karate blow and not the strict execution of the technique. The individual... This description may be from another edition of this product.

Published by Thriftbooks.com User , 11 years ago
I agree with those reviewers who say that it would generally take very powerful karate blows to cause the injuries featured in this book (review based on 1969 edition). Virtually every part of the body as target is featured in this work. As an example, consider a hit to the throat. It could crush the windpipe, causing asphyxiation. But asphyxiation could also be caused by a blow that stimulated the laryngeal nerve. The epiglottis could close and not reopen. Similar effects could occur with a blow to the vagus, hypoglossal, or phrenic nerves. A blow to the neck blood vessels can create a hematoma that could cause asphyxiation by pressing against the trachea. Now consider kicks to the abdomen. They can cause liver lacerations or peritonitis. [My pastor, as a boy, got punched in the stomach by another boy, causing peritonitis that almost killed him]. A kick just above the groin, although missing the genitals, can cause a ruptured bladder, either directly or from the broken end of the pubic bone. One limitation of this work is its lack of elaboration on "Combat KI". Martial arts practitioners with developed "Combat KI" can take powerful blows to sensitive parts of their body, such as the throat and groin, without experiencing either disabling pain or injury. Also, quantification would be helpful. There are studies now available on the forces produced by martial-arts hits and kicks. These could be combined with estimates as to how much force to body parts it would take to actually produce the kind of serious injuries featured in this book.

A must have book!

Published by Thriftbooks.com User , 14 years ago
Anyone training in any form of martial arts who places an emphasis on the pure self-defense applications needs this book. It will reinforce one of the most important things you need to learn: It takes very little to seriously injure another person. And because of that, you realize why it's more important than ever to walk away whenever possible. After all, you can be seriously injured just as easily. I've bought and given away several copies of this book. It's now the only title I keep relative to martial art training and practice.

Published by Thriftbooks.com User , 18 years ago
The author went to great lengths to analyze the effects of common karate blows. This has implications for appreciating "soft" forms of self defense as compared with those forms most ameniable to full contact with protection gear. The book in effect documents the effects "soft" (low inertia) blows can have on vital points. The forward to the book is well written also by a professional educator, enthusiast, and instructor (Chris Town.) ;)

For people who are interested in advanced skill development

Published by Thriftbooks.com User , 22 years ago
This is a great referance for people with previous Martial Arts skills. I like the explanation of medical complications, which can occur from the result of one's use of the described techniques. The book doesn't only teach you what damage can be done, but it also explains what could medically occur in the Best and the Worst case senerio. If you don't have any Martial Arts training, this book may not be for you, but with any skills this is a great reading material to further your Martial Arts knowledge. I didn't like the moves demonstrated in the case of attack and defence. Eventhough, they might be helpful, they are not always the best moves and might be missleading to the reader, but overall the book is amazing and deffinetly worth reading.

Published by Thriftbooks.com User , 23 years ago
Any serious and experienced Martial Artist will recognise the seriousness of this book, and rather than strive to use the techniques explained, they will like myself, be more aware and strive towards not using the techniques. As the title quite rightly states, this book describes in detail how it is possible to kill someone and therefore informs the reader, what NOT to do. The majority of all techniques shown within this book will need an experienced understanding of a Martial Art in order to perform them (so if you want to read this book and you are not a Martial Artist, then there is not much point in reading it).This book opened my eyes and taught me a lot, escpecially the medical implications which i think is very important to know and understand what the consequences of such deadly blows can cause. If you haven't read this book, i would recommend it.
Trustpilot
Copyright © 2022 Thriftbooks.com Terms of Use | Privacy Policy | Do Not Sell My Personal Information | Accessibility Statement
ThriftBooks® and the ThriftBooks® logo are registered trademarks of Thrift Books Global, LLC