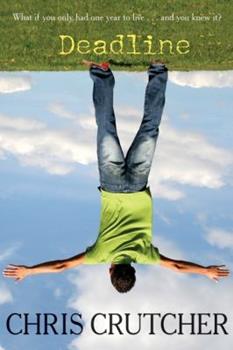 How can a pint-sized, smart-ass eighteen-year-old make his mark on the world from Nowheresville, Idaho--especially when he only has one year left to do it? When Ben Wolf learns his senior year of high school will be his last year, period, he is determined to go out in a blaze of glory. That means not letting anyone know about his diagnosis. It means trying out for the football team. It means giving his close-minded civics teacher a daily migraine...

Published by Thriftbooks.com User , 13 years ago
About once a year I find a book that makes me cry at the beginning and again at the end and changes my life somewhere in between. Last year that book was Speak by Laurie Halse Anderson, the year before it was Louis Sachar's Small Steps, and the year before that it was Sisterhood of the Traveling Pants (Sisterhood of Traveling Pants, Book 1) by Ann Brashares. But now, at the tale end of this year, I can tell you that Deadline has changed the way I look at life, given me hope for the future and made me a better person, all within 316 pages. If the cover of the book doesn't get you hooked--a sky so vividly blue it makes your heart ache and type placement that makes you wonder if you holding the book upside-down--the story will turn your life upside-down. And that's no joke. Ben Wolf knows exactly what he wants from life. He wants to join the football team despite his miniscule size. He wants to teach his civics teacher a lesson in acceptance. He wants to clean up the town drunk, get the girl of his dreams to see past his size, heal his mother's manic depression, all in the year he has left after being diagnosed with a terminal, aggressive blood disease. And he wants to keep it all to himself. What Ben doesn't know is what he wants for himself. He has spent eighteen years holding everyone around him together, so now he doesn't know how to hold himself together. This is a beautifully written story with full characters and imagery that will transport you to the tiny town of Trout, Idaho. I know it sounds sappy, but it really did touch my heart. Chris Crutcher is a master at bringing humanity to the written word.

Published by Thriftbooks.com User , 14 years ago
This is a completely engrossing read. The premise is straight forward enough, but this is Chris Crutcher, so there are interesting characters, sports, coaches, a believable teen romance. And, as usual, Crutcher provokes thought on difficult issues. What IS the best way to live? What lies should you tell, if any? How WOULD you live if you only had a year left? Can one person make a difference? Whose oxygen mask goes on first? I read this right after reading Downham's "Before I Die", and the contrast was fascinating. Same basic premise: a teen living with a terminal illness. As much as I liked the intensity of Downham's realistic drama, I like Crutcher's more, because "Deadline" is supremely joyous. As a teacher, I know that some students who don't read much will need a hand navigating the first 100 pages, as Ben Wolf takes a while to get to know. Still, there are some serious twists and more than a few moments to choke up over which offer plenty of payoff for the faithful. And yes, the people who object to Crutcher's other works will probably find this one equally offensive for all the usual reasons: sex is mentioned, religion is discussed, politics are argued. And those are some more reasons to savor this fine book.

Published by Thriftbooks.com User , 14 years ago
This is classic Chris Crutcher with all of his signature trademarks -- sports, therapy, social issues, sexual issues, coming of age, and, of course, profanity. DEADLINE even picks up a strand from one of his first works, RUNNING LOOSE. Lou Banks, the teenage protagonist of that work, is now the football coach of Trout (Idaho) High School, home of this work's protagonist, 18-year-old Ben Wolf. The wrinkle here is a death foretold. Right out of the gate in the opening pages, young Ben hears from his doctor that he has a terminal disease with one year to live. He decides a) not to take treatment for it so he can live his remaining days without radiation and chemo-related sicknesses, and b) not to tell anyone, family included. Crutcher makes him 18 -- older than your average YA hero -- so he can pull this off with the story remaining believable. OK, so you have a year to live. What to do? If you're a short, wirey runner like Ben Wolf, you ditch track to go out for football and train like no tomorrow. And you try to win the heart of one of the school's toughest beauties, volleyball star Dallas Suzuki. You also treat yourself to dreams where you meet and have deep talks with a guy named "Hey-soos" (yes, a Spanish-sounding rendition of a guy we know from a Testament we know). Add to the mix football action scenes, an alchoholic ex-priest with a secret, a teenaged mother with a secret, and a running, nothing-to-lose battle of wits with a pig-headed history teacher, and you get the type of book Crutcher fans look forward to. Oddly, some teenaged readers, when offered Crutcher fare, tend to find it too cerebral or "dated" in a sense. For instance, this book includes Ben's quixotic quest to get a street in his town named after Malcolm X as well as jokes about Patty Hearst -- the type of names Baby Boomers like Crutcher himself can relate to, but Gen X and Y readers might have no clue about. Not a big deal when you consider the emotional punch built into the end, of course. We see this one coming (as does Ben), but it still takes us by surprise. Death, as a character, is like that. For that matter, Death in real Life (if you'll forgive the oxymoron) is like that, too. Recommended for Crutcher fans, adults who like YA books, and thoughtful kids who don't need plot alone to sustain them through a book, DEADLINE is a great exercise in living each day like it might be your last.

Published by Thriftbooks.com User , 14 years ago
"Put your own oxygen mask on before you try to help anyone else. Life is your practice field. The state playoffs are inside you." I love the way Crutcher seeps deep inside your head and makes you think. Ben is a great character. He is "normal" but beyond this years in the way he sees things in his shortened life. It makes you wonder if it wouldn't be better to know of your impending death. The way Ben challenges his teacher is any "great teachers" dream of a great student. I teach, I would love the passion Ben has to question what he is learning. Don't pass up this book! If I could give it more than 5 stars, I'd double it.

Chris Crutcher does it again

Published by Thriftbooks.com User , 14 years ago
I've read all of Crutcher's books and this one ranks way up there with "Running Loose", which I consider his best. You'll love the main character - Ben Wolf - as he lives out the last year of his life. Though this is young adult - like always there are plenty of adult situations which will make you think. Wolf goes through it all his final year - athletic stardom, love and pain and life and death. This one will stay with you long after you've read the final page.
Copyright © 2020 Thriftbooks.com Terms of Use | Privacy Policy | Do Not Sell My Personal Information | Accessibility Statement
ThriftBooks® and the ThriftBooks® logo are registered trademarks of Thrift Books Global, LLC