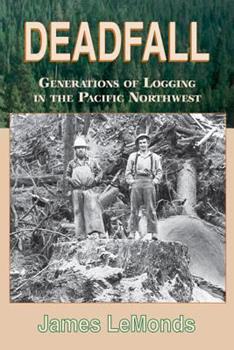 Deadfall: Generations of Logging in the Pacific Northwest

Through the life stories of the author's grandfathers, father, uncles, and cousins, Deadfall documents the dramatic changes in the logging industry since the early 1900s. The book focuses on the influence of international timber giant Weyerhaeuser Company in the Pacific Northwest, yet it themes resonate from Alaska to the American Southwest-wherever timber is king. While spurning nostalgia for logging's glory days, Deadfall attempts to view a future...

Captures The Soul Of The Logger & Decline of the Industry

Published by Thriftbooks.com User , 20 years ago
They say write about what you know...LeMonds knows the soul of the past and modern logger and writes with as unpretentious style as I've seen in a long time. He uses the language (always loggers...never lumberjacks) and shares with the reader the language and techniques of everything from falling, bucking, setting chokers, to trucking the logs. Furthermore, he does it based upon the real-life experiences of his family. You learn how they used to rig a spar tree and what went through the climbers mind as he accomplished this task 150-200 feet in the air. LeMonds also shares the future of forestry (hand-seeding, herbicides, fertilizer & thinning) to move the life span of high-productive crops like Douglas Firs from hundreds of years to perhaps as little as 35 years as well as what the modern equipment does now and probably into the future.. Perhaps you might find the short chronology of the work history of each of his family members in the logging business too detailed but it's more than worth the wonderful stories and perspectives that go with them. LeMonds acknowledges the scars on the landscape of the past but also the enduring scars on these tremendous men who contributed so much to this Country's development of the 20th century. I don't think one could ask for a more balanced view of this industry and have it written with such class. This is the best book I ever expect to read about this subject, which is so dear to my heart having been raised in a nearly identical community in Southern Oregon. Today I ordered a second copy to send to a dear friend still working in the woods.

Published by Thriftbooks.com User , 21 years ago
James Lemonds peels away the Bunyonesque macho image that has been falsely hung on the loggers of the Northwest and shown them as they are; broken down, disabled and discarded by the industry that exacted a terrible toll on both the workers and the forests.Anyone wanting to research the human cost the industry extracted should start with this book. Death and disabilty rates beyond the range of nightmares were considered standard and acceptable, simply because the carnage took place outside the public view.The hard work, honest efforts and caring that the workers brought to the job were repaid with lack of respect and now, lowering wages, no job security and disdain from the general public.As bad as it is in Lemonds description, the list at the end of the book does not include all the co-workers of any current or former loggers that I have talked to who have read this book, nor co-workers of mine, who were killed on the job. The toll suffered by the workforce was at least equal to that suffered by the forests.Lemonds tells the story in an even-handed, personal way through his extended family and community. This is a must-read book by any student of Northwest culture of the past century.

Sacrifices past, present and future

Published by Thriftbooks.com User , 21 years ago
Logging in America's Northwest, an industry and occupation which arouses strong passions and polarizing viewpoints.Jim LeMonds, though not neglecting the emotional and substantive areas of contention, focuses primarily on the human contribution and in some cases sacrifices of the loggers themselves. This book should be read by anyone with even the vaguest interest in forest management and environmental issues. Although he is from a logging family, I feel that the author has been exceedingly fair in his description of todays industry and what the future holds for this industry and more importantly for logging communities.To me the efforts and accomplishments of the people featured in this book, and the many thousands like them, are what has made our country great. It is ironic that their contibutions and in some cases sacrifices have not received the recognition that they are rightfully due.Buy this book, regardless of your political viewpoint on the logging industry, and celebrate the spirit that has enabled all of us to enjoy the many privledges of being Americans.
Trustpilot
Copyright © 2022 Thriftbooks.com Terms of Use | Privacy Policy | Do Not Sell or Share My Personal Information | Accessibility Statement
ThriftBooks® and the ThriftBooks® logo are registered trademarks of Thrift Books Global, LLC