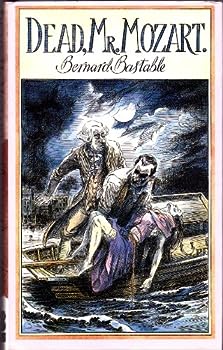 Mozart visited England as a child, but this story suggests that instead of returning to Austria and an early death, he stayed. It is 1820 and Mozart finds himself insulted by the king, used by his mistress, and involved in both the disposal of a body and initiating enquiries to find the murderer.

Published by Thriftbooks.com User , 12 years ago
This is an interesting period piece. Wolfgang Gottleib Mozart is alive and well in 1820 London. (Gottlieb, of course, means the same as Amadeus)."Dead, Mr. Mozart" is repeated throughout the book, first referring to the demise of George III, then the demise of some of Mozart's music popularity and the murder of a young girl. Mozart eagerly anticipates writing music for George IV's upcoming coronation but gets involved in a series of intrigues within his own opera house company. We meet a lot of the famous personalities of the day and we see the aristocracy with all its idiosyncrasies. We see Prinny, (George IV) the be-rouged, lecherous dandy and his vulgar and rejected wife Caroline. These personality vignettes are well done. The character of Gottlieb Mozart himself as presented in the book is convincing, his chronic indebtedness being a hallmark of his personality as well as his earthiness. and his cheerfulness- and of course, his incomparable talent. The murder mystery involved in the book- who killed a young dresser named Jenny-and why- is not especially interesting nor is the solution a surprise. Mozart, is deeply involved in this caper although he is totally innocent and becomes in essence the book's detective. My feeling about the book is that the 64 year old Mozart as a permanent resident of London just doesn't quite gel. Nevertheless, the novel is original and provides very good atmosphere. You can readily immerse yourself in early nineteenth century London with all its tawdriness and all its glory.

Published by Thriftbooks.com User , 21 years ago
What a delightful historical mystery by the noted mystery author Robert Barnard, in his pseudonymous alter ego. He poses this question: What if Mozart had lived to a ripe old age and then found himself mixed up in murder? Actually, his Mozart is Wolfgang Gottlieb Mozart. The book opens with the death of George III and Mozart is encouraged by a patron to believe that the upcoming Coronation might just be a splendid opportunity for a new opera.Along the way we meet persons already familiar to devotées of the time period: Lord and Lady Hertford, Lord Egremere, Lady Conyngham and more, including an absolutely spot-on interpretation of Prinny, himself, whose estranged wife, Caroline is, of course, coming home to be Queen, and dear Prinny is busy trying to discredit her.It seems that Mozart stayed in England all these years, dut to having once performed for a much younger George III, who generously and misguidedly paid the young artist 50 guineas. Father Leopold Mozart decided there were better possibilities in England than on the Continent, so they stayed. Thus, Mozart's son is now teaching music near Leeds, his daughter lives elsewhere, and lucky sister Nannerl is back in Vienna. (After all, nothing English is nearly as good as anything German or Austrian.) Mozart and his theater manager have a running rivalry with the Italian composer Rossini and several Italian singers, and there are numerous running jokes (or puns) about subjects for the new opera. Mozart leans toward the Merry Wives Of Windsor (think about it a bit); Falstaff, that fat, old rake, or maybe even Don Giovanni or Il Matrimonio Segreto. In between are jokes about the real music (such as The Magic Flute), Masons, and other real or imagined titles.Actually, the only confusing thing to me was the music mentioned. Some titles are accurate, while others are merely a pastiche, and it is sometimes hard to know which is which. The chapter titles are frequently titles of known music by the real Mozart. Nevertheless, I truly enjoyed this book, laughing out loud on many occasions. It is a literate and witty murder/mystery, fantasy/Regency era novel, with much to recommend it!
Trustpilot
Copyright © 2022 Thriftbooks.com Terms of Use | Privacy Policy | Do Not Sell My Personal Information | Accessibility Statement
ThriftBooks® and the ThriftBooks® logo are registered trademarks of Thrift Books Global, LLC