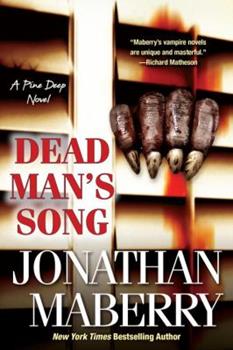 From the powerful imagination of a new horror master comes a bone-chilling tale set in a small town where good and evil are joined in a terrifying, deadly battle. . . Evil Endures Once an idyllic Pennsylvania village, Pine Deep awoke one morning to find itself bathed in a massive bloodletting. Twice in thirty years the townsfolk have endured the savage hungers of a murderous madman. . .but if the residents think the death of serial killer Karl Ruger...

Published by Thriftbooks.com User , 13 years ago
Let me get one thing straight first. One reader of the first book in the Pine Deep trilogy fired some idiotic salvo accusing Maberry of paying people $500 to write favorable reviews. A couple of others picked up that ludicrous refrain for this book. Now, in a world full of intelligent readers there would be no need to respond to such blithering numbskulls. I'm sure Maberry himself feels no need to take such fools seriously. But on the chance that someone may actually be swayed by such bilge I'll go on record as saying my opinion comes free of charge. I've never met Jonathan but if I ever do I'll shake his hand and congratulate him on creating perhaps the best horror tale of the present decade. Don't let the baseless rantings of attention-challenged cretins persuade you for a second that Ghost Road Blues and Dead Man's Song are anything less than landmark works in horror fiction. If they can't hang with a couple of 500 page novels I would suggest they see their doctor about the possibility of undiagnosed ADHD. Maberry's Bram Stoker Award nomination is no accident. These books are the REAL THING. Immerse yourself in Maberry's meticulously crafted story. Leave the aforementioned cretins to Dick And Jane and coloring books.

Published by Thriftbooks.com User , 13 years ago
I never write reviews, but I almost didn't buy this book after seeing some of the negative reviews. I liked the 1st book, so I broke down and ordered it, figuring that it would be more of the same as the 1st book and I would probably get bored of it(not that the 1st book was bad at all, but I couldn't imagine what more could happen). It is nothing like the 1st. Yes, the same people and town, but now it really picks up momentum and we are getting into the supernatural on a big scale. I could not put it down. Yes there are a couple of typos that did not get found when edited, but give me a break, it's over 500 pages. Anyway, if you are really caught up in the story, you never notice the small stuff. I can't wait for the next. In spite of the person raving about it not having an ending, I am so glad it didn't. Now I have the rest of the story to look forward to.

Souls are ripe for the picking

Published by Thriftbooks.com User , 14 years ago
The second installment of the story woven by Maberry was delicious to say the least. I know some readers out there are grumpy over the 500 page length of this middle child of a tale but I absolutely loved every word and it took me a long time to read, yes I will admit that life kept me busy and the book was long but man, by page 400 I could barely sit in my reading chair, the story was getting good! I strongly recommend reading part one of this trilogy, Ghost Road Blues; for hose who love to read, I am such a person, it doesn't matter to me if the story I am reading is two thousand pages long as long as it grips my gut and eyes I am all for it. Part two continues right after the first book and the author is set on filling in those who forgot details or did not read the first book. The author does a marvelous job of building up the characters, just as he did in the first story and the bad parts is that some of them go into dark places that they should stay away from - like Ubel Griswold's farm - yikes the yummiest and creepiest part of the book - instead they find things so creepy and unsettling that I could barely keep on reading, mind you I read both books one after another so I felt a strong connection and bad events happening to my favorites absolutely terrified me. Ok, for those who are checking this book out I will not spoil anything, so go read the first, it's really great, even the finicky readers liked it, and those who did read the first part will be filled on all the events of the black harvest that happened to Crow, Wolf and Guthire years ago. Dark pools of blood are still to be spilled, with a curse put on one of them that made for a great last book. I cannot wait to sink my teeth in the final ending, because this book was a real nurturing center for the story and the characters. Maberry does a fantastic job of building his sentence, and quite often I would have to look up from the book and absorb his words because even though this was a horror book his thoughts and actions touched me deeply. So be ready to revisit the old folklore of Pine Deep, the real meaning behind the words Ubel Griswold and the massacre that is in the brewing. Be ready for the army that is sleeping a living dream hungry for the necks of the innocent who have all ready suffered a whole deal, be ready for part three that has left me impatient for the dramatic conclusion that the past books, adding up to over 900 pages have been a build up to... Be ready for the evil cowards who live in the town, the man buried in the pit, the secrets of Ubel's house and the violence that is about to be unleashed.... I think this book was a nursing station for the tale that filled in a lot of blanks and opened a whole world of terror that will simply have to end with a bang. Those who thought there was no resolution know there will be a third, so give it a chance. - Kasia S.

Published by Thriftbooks.com User , 14 years ago
I loved Ghost Road Blues, which won the Stoker award, and was looking forward to the sequel, Dead Man's Song. I wasn't disappointed. It was good to reconnect with characters like Crow and Val and The Bone Man. It was good to see again heroes who are heroic and villains who are evil. Maberry's greatest strengths lie in mixing action with atmospheric suspense. He does the spooky woods thing as well as anyone out there. It just so happened that I was alone in the house for a few days when I finished Dead Man's Song. I may be staying up late tonight with all the lights on.

Published by Thriftbooks.com User , 14 years ago
In the middle of summer, Jonathan Maberry delivers a cold October chill, and it's not just from his poetic evocation of autumn in a place called Pine Deep. Maberry's writing gives ruined flesh, curdled blood and bleached white bones to the childhood fears that quickened your steps as you walked home at nightfall in late October, fears that you had just about gotten over. Reading Maberry's books, you can't help wondering if maybe you were right the first time.
Copyright © 2020 Thriftbooks.com Terms of Use | Privacy Policy | Do Not Sell My Personal Information | Accessibility Statement
ThriftBooks® and the ThriftBooks® logo are registered trademarks of Thrift Books Global, LLC