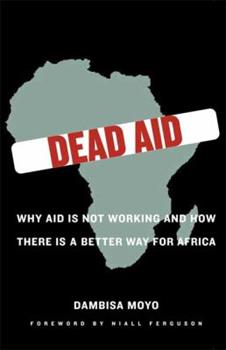 Dead Aid: Why Aid Is Not Working and How There Is a Better Way for Africa

In the past fifty years, more than $1 trillion in development-related aid has been transferred from rich countries to Africa. Has this assistance improved the lives of Africans? No. In fact, across the continent, the recipients of this aid are not better off as a result of it, but worse--much worse. In "Dead Aid," Dambisa Moyo describes the state of postwar development policy in Africa today and unflinchingly confronts one of the greatest myths of...

Published by Thriftbooks.com User , 13 years ago
First off, can someone explain to me why this woman is trying to discredit Bono and Bob Geldoff? What make this woman think she knows more than two great musicians, just because she has a PhD in Economics? Take it easy, I'm just kidding. With all the fanfare that Angelina Jolie and Bono are getting, with their big tours of the "third world", I began to wonder where the "locals" fit in. While all the celebrities are droning on about poverty in Africa, what do the Africans have to say? Africa has universities, so what do African academics think of foreign aid? Why aren't they the ones speaking on TV? Dambisa Moyo is from Zambia, has a PhD in Economics, and worked in finance, so she writes with a bit more authority than Bono. She argues that "foreign aid" in the form of World Bank and IMF loans are hurting Africa. The money ends up in the hands of corrupt dictators, who misspend the money while the people starve. Look at Idi Amin, and Mbutu Sese Seku; they lived in high luxury while their nations lacked schools, hospitals, and paved roads. If you want more proof, look at Jean Bedel Bokassa of the Central African Republic; when the money ran out, he literally "ate" his countrymen (pun intended). It's not only Africa that suffers from World Bank loans. In the documentary "Life and Debt", Michael Manley talks about how World Bank loans damaged Jamaica too. The success stories discussed in the book come from foreign investment, not loans. The investment, however, isn't in Africa's gold and diamond mines, which offer low pay and low skill. The best investment is in industry and technology. Computer chip factories generally pay more, and require more skill (in which the workers can be trained). Ghana, for instance, now has data-entry businesses that pay an hourly wage. The wage is far less than the US minimum, but a lot more than you'd earn in a diamond mine! Yet in this age, 40 years into Africa's independence, the continent is barely industrialized. Look at the "diamond" issue in terms of labor; the miners get paid a pittance, but the diamond-cutters get paid thousands! Yet none of the diamond-cutters are in Africa; they're in New York, Tel Aviv, and Antwerp! Africa's diamond mines are of no real benefit to the continent because the only job they offer is unskilled labor. Moyo considers China a friend of Africa. Thanks to Chinese investment, there are paved roads, factories, and businesses that give jobs and skill. But she faults the leaders in Africa as being a blockage to foreign investment. According to her, it takes months to get a business license in Cameroon, while in South Korea it takes a week. Who wants to invest in Africa when the governments make things too damn hard? One thing Moyo doesn't dwell on is birth control. A woman who has children to take care of is held back. Putting off children can help women economically. Birth control is very popular in India, China, Taiwan, and Japan, and look at how well those countries are doing.

Published by Thriftbooks.com User , 13 years ago
Wow, what a breath of fresh air this woman is. Sure, some of the arguments that have been made in this book have been made before, but Ms. Moyo presents them in a startlingly fresh and direct way. Like many brilliant minds, Ms. Moyo can say a lot with a little and the brevity of this book only serves to aid its piercing--yet reasoned--arguments. This book is, quite simply, a frank assessment of where Africa is, how they got there, and a road map for the rise of Africa going forward--all in a little over 200 pages. I for one hope that the world follows her advice sooner rather than later. Africa is a beautiful place with beautiful people and I wish they could be allowed to rise without the constant tinkering of colonial powers, well-intentioned (yet misguided) liberals and celebrities. An unqualified 5/5 stars and I am a huge new-found fan of this woman.

Published by Thriftbooks.com User , 13 years ago
Over the past 60 years at least $1 trillion in aid was sent to Africa - yet, calls for even more grow steadily louder. Moyo - a native of Zambia, contends that evidence demonstrates that this aid has made the poor poorer. Real per-capita income today is lower than it was in the 1970s. In other words, aid is not part of the solution, it is part of the problem. Even after aggressive debt-relief campaigns in the 1990s, African countries still pay close to $20 billion in debt repayments per year - at the expense of education and health care. Moyo also asserts that the roughly 500,000 individuals in the "aid business" have no motivation for that aid to succeed; meanwhile, well-meaning individuals such as Bono have choked off debate of its efficacy. The author claims that the most obvious criticism of aid is that it enables rampant corruption and bloated bureaucracies. In 2002, the African Union, an organization of African nations, estimated that corruption was costing $150 billion/year. Transparency International, a corruption watchdog, states that Zaire's former president is reputed to have stolen at least $5 billion from the country. Across Africa, over 70% of government funding comes from foreign aid - enabling those governments to avoid accountability to local citizens since they pay so little. In Cameroon, it takes a potential investor about 426 days to gain a business license, vs. 17 in South Korea. Under the auspices of the U.S. Food for Peace program, each year millions are used to buy American-grown food that is then shipped to Africa where it puts local farmers out of business. Moyo's bottom-line is that other regions should stop the largess towards Africa, and Africa should focus on becoming more attractive to private investment. This includes ceasing to be the source of the world's greatest number of armed conflicts.

Published by Thriftbooks.com User , 13 years ago
While this book is about Africa, many of the overall insights, lessons, etc. Dambisa Moyo puts on paper here apply as much to the all but frozen state of postwar development and aid policies in many other parts of the world today. This is easily one of the most important, well-written and documented books on the chronic band-aid solutions to the Third World challenges promulgated not just by celebrities and philanthrocapitalists but First World governments, foundations and other institutions still stuck in the early part of the 20th century. Moyo's remarkable treatise should be required reading for public as well as private sector leaders.

Published by Thriftbooks.com User , 13 years ago
Excellent book. Dambisa Moyo was born and raised in Lusaka, Zambia. Her mother is chairwoman of a bank called Indo-Zambia Bank. Her father, the son of a South African mine worker, runs Integrity Foundation, an anti-corruption organization. Moyo is the former Head of Economic Research and Strategy for Sub-Saharan Africa at Goldman Sachs in London, where she worked for eight years. Moyo has also worked at the World Bank in D.C., where she was a co-author of its annual World Development Report. Moyo is the author of "Dead Aid", an indictment of the foreign aid industry which was released spring 2009. She argues that Western aid to Africa has not only perpetuated poverty but also worsened it. In the book, she calls for all development aid to Africa to be halted within five years because it has brought dependency. She insists that largely aid has held back Africans. "You get the corruption -- historically, leaders have stolen the money without penalty --and you get the dependency, which kills entrepreneurship. You also disenfranchise African citizens, because the government is beholden to foreign donors and not accountable to its people", she says. Because they can count on aid, Moyo argues, most sub-Saharan African countries don't even bother to issue bonds. That would require a country's president and cabinet minister to sell their countries to investors. Moyo has a Ph.D. in economics from Oxford University, and her Master's Degree is from Harvard University's Kennedy School of Government. In addition, she holds a Bachelor of Science in Chemistry and an MBA in Finance from American University. She lives in London. Matthew Rees (WSJ March 17, 2009) points out that it is one of the great conundrums of the modern age: More than 300 million people living across the continent of Africa are still mired in poverty after decades of effort -- by the World Bank, foreign governments and charitable organizations -- to lift them out if it. While a few African countries have achieved notable rates of economic growth in recent years, per-capita income in Africa as a whole has inched up only slightly since 1960. In that year, the region's gross domestic product was about equal to that of East Asia. By 2005, East Asia's GDP was five times higher. The total aid package to Africa, over the past 50 years, exceeds $1 trillion. There is far too little to show for it. Ms Moyo believes aid money pouring into Africa, underwrites brutal and corrupt regimes; stifles investment; and leads to higher rates of poverty -- all of which, in turn, creates a demand for yet more aid. Africa, Ms Moyo notes, seems hopelessly trapped in this spiral, and she wants to see it break free. Over the past 30 years, she says, the most aid-dependent countries in Africa have experienced economic contraction averaging 0.2% a year. America's policy toward postwar Europe is often cited as the model for African assistance, but Ms. Moyo reminds us that the vaunted Marshall Plan was limited to
Trustpilot
Copyright © 2022 Thriftbooks.com Terms of Use | Privacy Policy | Do Not Sell My Personal Information | Cookie Preferences | Accessibility Statement
ThriftBooks® and the ThriftBooks® logo are registered trademarks of Thrift Books Global, LLC