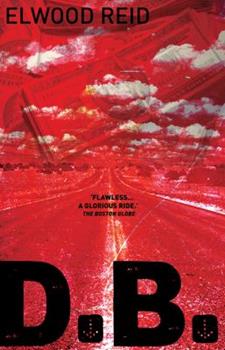 This description may be from another edition of this product. In 1971, a man calling himself D.B. Cooper hijacked a flight, claimed his ransom without harming a soul, and vanished. Elwood Reid uses this true story as a starting point, imagining Cooper as Phil...

Published by Thriftbooks.com User , 16 years ago
What a great idea! A novel that takes on the legend of D.B. Cooper. What if he did survive? Where did he go and what did he do? That's half of this interesting book by Elwood Reid and by far the best half of the book. He has created a great historical fiction character that was worth the price of this book. Unfortunately, the story of D.B. in this book gets intertwined with the life of a newly retired FBI officer who was actually on the Cooper case when it happened. Years later, immediately after retiring he is pulled back into the case by another FBI officer who harbors a long-held interest in the case. I won't reveal how D.B. and the FBI come together in this book, but I'm afraid it detracts from the story. Every once in awhile you come across a book that is written exceptionally well but has plot problems. This is one of those books where the main character comes alive, the descriptions and flow of the account is great but in the end, it just comes off as too improbable. Moreover, the other characters in the book just aren't as interesting as D.B. himself. Still, I liked the book enough to recommend it and will give the author another try in the future.

Published by Thriftbooks.com User , 17 years ago
Admittedly, I'm biased. I've been a Reid fan for years. His hard-boiled, testosterone-filled stuff is exactly the kind of literature I thrive on, particularly because there isn't much of it out there.So Reid fans will find all of that - plenty of beer, more than a few stops at beaten-up trailers, and some good old fashioned violence, but the pleasant surprise was Reid's humor, which has been turned up to the Nth degree.Don't get me wrong - Reid's always been a clever writer, but it was more of the type of humor where you caught yourself smiling. There are passages in this book that are gut-splitting hilarious. I'm not going to quote them - if I was a real reviewer, I would, but this is just a guy talking about a book here. But it was great to see a new weapon in Reid's already potent arsenal.In What Salmon Know, Reid proved himself to be a brilliant writer. In Midnight Sun, he came across as a brilliant writer learning to write a novel (which was still better than most other authors). In DB, he proves his mastery of the medium. Awesome stuff, Elwood!
Copyright © 2020 Thriftbooks.com Terms of Use | Privacy Policy | Do Not Sell My Personal Information | Accessibility Statement
ThriftBooks® and the ThriftBooks® logo are registered trademarks of Thrift Books Global, LLC