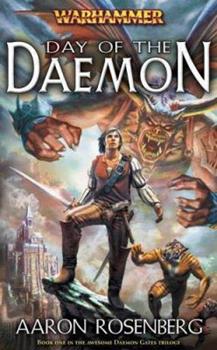 Day of the Daemon (Warhammer, Daemon Gates Trilogy, Book One)

In a thrilling race against time, Empire archaeologist Alaric and his no-nonsense sidekick Dietrich must find and destroy four Chaos icons before their evil power can be awakened and used to summon a powerful daemon that will destroy the Empire.

Published by Thriftbooks.com User , 14 years ago
Day of the Daemon by Aaron Rosenberg is a fantastic trip into the humongous world of Warhammer. Book one of the Daemon gates trilogy starts out with Alaric and Dietz returning home to Middenhelm only to find everything is in chaos. People are pointing fingers and its not long before our two adventurers are accused of being witches. In an attempt to clear their names they reluctantly agree to a quest to destroy 3 statues which are really daemon gates. Unfortunately for them they also have to take along guards of a sort sent not only to watch them but to help destroy the statues. As always in worlds of darkness things cannot be taken at face value and friends arent always friends. Alaric and Dietz have a long perilous journey ahead and at the end... well lets just say the end is only a new beginning after all.

Published by Thriftbooks.com User , 15 years ago
Alaric is a young noble-turned-explorer. His extremely intelligent pet is Glouste, a tree-cat that resembles a ferret, and she is often found upon Alaric's shoulders, curled around his neck. By his side is Dietz, his best friend and companion. They return to the city of Middenheim to find it shattered following the great war against Chaos. It is not long until they are accused of being heretics. To prove their innocence they take on the task of hunting down and destroying three statues of Chaos. A representative from each guild goes with them. Thus the group also contains a witch hunter, a trader, a cartographer, a scout, a Count's Guard sergeant, and a full unit of soldiers. But destroying the sculptures will not be easy. They must battle tribes of beastmen, dangerous gypsies, a full warband of orcs, and cult members. If even one statue remains the world is doomed. Blood sacrifices will cause a portal to open and the Blood God's champion will emerge. **** This is the first novel in the Daemon Gates trilogy and definitely not to be missed. Each book also seems to be a stand alone tale, with hints as to what the following story will be about. If this first story is anything to go by, then a trilogy will not be long enough for me to be satisfied. From the action filled beginning to the climactic ending, I found myself enthralled. Excellent story! **** Reviewed by Detra Fitch of Huntress Reviews.
Copyright © 2020 Thriftbooks.com Terms of Use | Privacy Policy | Do Not Sell My Personal Information | Accessibility Statement
ThriftBooks® and the ThriftBooks® logo are registered trademarks of Thrift Books Global, LLC