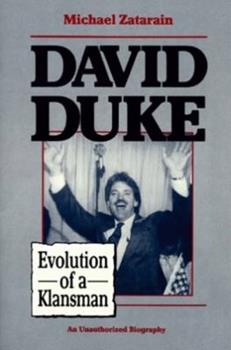 David Duke: Evolution of a Klansman

In researching this comprehensive work, Zatarain spent hundreds of hours interviewing. He spoke with Duke's family, former classmates, political allies and enemies, Klan members, and Duke himself in an attempt to understand the thinking behind his radically racist crusade. In fact, Zatarain interviewed David Duke more than 50 times, for a total of over 100 hours, in the preparation of this fascinating and thoroughly researched account.

He Leaves the Toilet, and Fails to Flush -- Why?

Published by Thriftbooks.com User , 24 years ago
It has been claimed that David Duke always leaves two fresh turds in the toilet and fails to flush them. This intensely compelling study of Duke explains why he is compelled to engage in this seemingly criminal behavior. Explore the as-yet-unsolved mystery of Duke's bathroom habits as he wanders from loo to loo throughout Loosiana in search of meaningful employment. Is he a Tidy-Bowl man for blue-collar whites? A Republican henchman for the shady businessmen of St. Tammany Parish,? Did he fall in love with the Northern girl when he was an adolescent? Or is he simply a man who never learned that common courtesy demands that one must leave the tap running while farting in the guest bathroom? Whatever the case may be, Duke is still guessing -- and so are we.

How the David Duke Phenomenon Occurred

Published by Thriftbooks.com User , 24 years ago
Based largely upon personal interviews with those who knew David Duke best, his earliest political friends and enemies, Zatarain's work has succeeded in revealing the secret origins of the "Duke Phenomenon." Chapter 13 is an especially interesting section because it discusses Hamilton Barrett at great length, the young man from liberal San Francisco who we know advised Duke to establish his "Civil Rights Campaign for Whites."

Published by Thriftbooks.com User , 24 years ago
It is truly remarkable how American politics works. During Duke's early career he brought in an adviser from the much more liberal and progressive environment of San Francisco, this was Hamilton Barrett. Barrett advised Duke to take the route of "Civil Rights for Whites." The rest is history.
Trustpilot
Copyright © 2022 Thriftbooks.com Terms of Use | Privacy Policy | Do Not Sell or Share My Personal Information | Accessibility Statement
ThriftBooks® and the ThriftBooks® logo are registered trademarks of Thrift Books Global, LLC