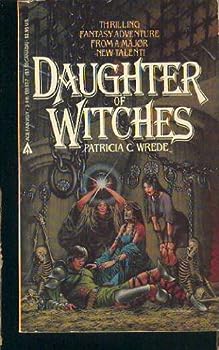 This description may be from another edition of this product. In the oppressive city of Drinn, a trio of magical strangers offers a servant girl the chance of a new life Drinn is not a safe place to be a witch. Ranira knows that better than most, for when she...

The Most Origional Take on Magic I've ever read

Published by Thriftbooks.com User , 20 years ago
In most fantasy novels one reads, magic is an accepted form of making things happen. But not in this novel. Here, to do magic is to be a witch. To be a witch is to burn at the stake. Wrede's story follows a young girl, whose parents were burned as witches and herself sold to pay for their debts. And then she meets strangers who come to the inn where she works, strangers who are more than they seem, and who force her to confront what she really is. I have never read a book on magic in which magic was illegal before this. Patricia C Wrede's rendition of this storyline is breathtaking, forcing me to read the entire novel in one sitting or die of anticipation. The characters are likeable and rounded out, with orgins recognisable from previous Lyra novels. I highly recomend this and all other Patricia C Wrede novels for all ages of readers. (note: book can be found in the compiliation Shadows over Lyra as well)

Published by Thriftbooks.com User , 22 years ago
This book was great! It was so descriptive and the characters were awesome! Ranira was very stubborn about her having magic, and I can see why! I mean, with her parents in that tragedy. But, nonetheless, magic is still cool and I wish I had it. There should be a sequal to this. One that is as rivating and amazing as the rest. Wrede, you rock!

The Best Fantasy I've Ever Read!!

Published by Thriftbooks.com User , 22 years ago
The book is set in a city where something just isn't right. There is something that reeks of bad magic calling to good witch named Mist. This brings her and her two friends upon a young girl whose parents have been burned as witches. Mist helps the young woman come to terms with her fear of magic and accept that she is really a daughter of witches, and a witch herself. <|:o)

Published by Thriftbooks.com User , 23 years ago
Tells the story of a bonds woman, who's parents have been burnt for being witches, she of course, doesn't believe that! The story progresses until she finds out that she is a witch after all, with the help of some folk from outside of the empire. Expertly written, keeps the reader hocked until the end. I should know,I've read it three times already!

Published by Thriftbooks.com User , 23 years ago
This book was fantastic, Wrede's vivid imagination is shown in this wonderful book!
Copyright © 2020 Thriftbooks.com Terms of Use | Privacy Policy | Do Not Sell My Personal Information | Accessibility Statement
ThriftBooks® and the ThriftBooks® logo are registered trademarks of Thrift Books Global, LLC