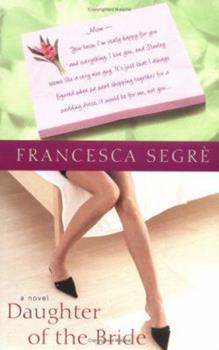 Daughter of the Bride

A dazzling debut novel about a woman watching her mother get hitched while her own finger is still decidedly bare. When her mom calls to say she's getting married, Daniella is both thrilled and... This description may be from another edition of this product.

Published by Thriftbooks.com User , 15 years ago
With her engaging and breezy style, Francesca Segre captures the odd experience of having your mother plan a fancy wedding before you do. The organic humor of the role reversal in DAUGHTER OF THE BRIDE is only heightened by the author's wit and candor. It's a new and welcome take on the "where's my husband?" genre. A pleasure and thoroughly recommended.

Published by Thriftbooks.com User , 15 years ago
Twenty-nine years old financial news broadcaster Daniella enjoys her work covering the testosterone New York Stock Exchange, loves her family, and has close supportive friends. However, when it comes to men, Daniella lacks the confidence that shines through her professional efforts and every other aspect of her personal life. As Daniella's mom Maya nears her sixtieth birthday she calls her to inform her that she is engaged to be married to Stanley and would like her daughter to help her with her wedding plans. Daniella is stunned that she will be giving her mom away instead of visa versa, but though already over-worked will make time for her beloved mother. Still she wonders if any of her current men might come close to meeting the criteria of her imaginary boyfriend though the standard of her I.B. is stratospheric quality. Readers will appreciate the insight to the single ambitious woman achieving success in a male dominated arena at perhaps the sacrifice of her personal life, but not because she fails to meet men. Instead Daniella applies her high quality criteria she thrives for on the job to men and so far they seem lacking. This chick lit takes Wall St. is a fine character study of a strong woman who in spite of her mother remarrying causing her doubts refuses to lower her standards. Harriet Klausner

Published by Thriftbooks.com User , 15 years ago
Mature women acting giddy and feeling romantic, young sassy single women wondering when they will find similar lovejoy. If you like the reality of the Sex & the City type dating treadmill New York women must run on, you'll enjoy and empathize with the main characters trials and tribulations in dating. This is a really funny and enjoyable read that is more than just about being single in the new millenium. This is a warm and funny look at an increasingly common situation in which the BRIDE in is old enough that she should get the senior discount on her honeymoon vacation package. There are very funny scenes showing the humor in being a 60+ bride planning a wedding with a daughter everyone expects to be a bride. I especially enjoyed some of the financial news reporter scenes where you get a sense of the madness of the NYSE trading floor. But also there are really touching poignant moments where Danielle's (the main character)money-honey toughness is exposed and we see her human desire to find love in a fast-paced complicated world and also to come to terms that the remarriage of her mother is another level of letting go her deceased father, who is present in everyone's minds as the plans for marriage #2 are underway. There is no pat and convenient resolution, it feels like a true story. This is a great book to share with your mother/daughter/stepmother/stepdaugher/allergic florist/Wall Street trader friend etc. Give hope to your single or widowed friends! In the interest of full disclosure, you should know that the author is a friend of mine, but after reading this I will genuinely encourage her to write more!

An hilarious must read!

Published by Thriftbooks.com User , 15 years ago
What a great book! Definately something that single people all over the world will be able to relate too...particularly career women! Apparently there is a film in the works too - so look out for that and follow-up titles from this author.
Copyright © 2022 Thriftbooks.com Terms of Use | Privacy Policy | Do Not Sell My Personal Information | Accessibility Statement
ThriftBooks® and the ThriftBooks® logo are registered trademarks of Thrift Books Global, LLC