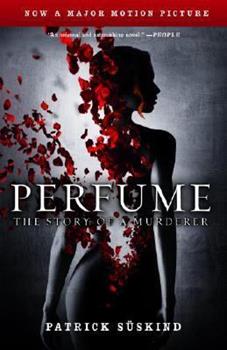 Perfume: The Story of a Murderer

by Patrick Süskind and Suskind

An acclaimed bestseller and international sensation, Patrick Suskind's classic novel provokes a terrifying examination of what happens when one man's indulgence in his greatest passion-his sense of smell-leads to murder. In the slums of eighteenth-century France, the infant Jean-Baptiste Grenouille is born with one sublime gift-an absolute sense of smell. As a boy, he lives to decipher the odors of Paris, and apprentices himself to a prominent perfumer...

Classic Story Feel With A Touch Of Horror

Published by Krys10 , 17 days ago
I purchased this book because Kurt Cobain from Nirvana mentioned it in an interview saying it was one of his favorites. I wasn't sure what to expect with this book but it was a pleasant surprise. I don't know how to write a proper book review but I'd say this book had a classic story feel mixed with a little horror.

Published by Lina Olivia Bass , 1 month ago
I saw this movie in 2007 and had no idea it was based on a book! The moment a saw the book recommended to me on Goodreads, I googled to see if it was where the movie came from. Once it was confirmed that they were one in the same, I knew I had to read it! I really enjoyed the story. I loved reading the journey of how Grenouille became a murderer. A uniqueness to this book is that there wasn’t much dialogue. Instead most of the book took place inside the minds of its characters. You really got an opportunity to see what was driving him, what made him tick, and what demise fell upon each person that “helped” him along the way. (Even though they didn’t know it.) The best part of this book, is the poetic ending. Sometimes there is a beauty in the madness of others, something to admire about the darkness they create. If you enjoy reading about what drives a murderer, than this book might be for you.

Book was written in and highlighted

Published by Annoyed , 4 months ago
I want to read the book for myself without someone else’s thoughts written all over it

Published by mary , 1 year ago
I've bought this book twice and lost it each time without finishing, here's to the "third times a charm" great book! Though bummed my copy didn't come with the yellow/orange cover and the spine has damage you can't go wrong with a boom for $6.99 that retails $16.99+

Published by Alicia C , 1 year ago
It's a great read in my opinion. The story was a bit if a slow burn at first but the book as a whole is amazing. The ending was unexpected and I love that.

one of the best books i've ever read.

Published by Thriftbooks.com User , 3 years ago
I read a lot, perhaps 2 books a week. this one caught me and I read it in two days. so unique, like nothing else. we each have a special talent, but many of us never find our own. this man not only found his special place but expounded on it. I won't presume to tell you about it, many other have done just that. just read it.

The book is better than the movie

Published by Thriftbooks.com User , 4 years ago
I did watch the movie first and I took me a couple nights to finish it the first time I watched. The second time I watched it without stopping. The book is absolutely amazing, and I fell in love with it. It wasn't drawn out with "air", it was descriptive and yet very addicting. The ending was everything, and I definitely will not forget about this book. Watching a movie is worth it though.

A DAZZLING AND INGENIOUS WORK OF FICTION....

Published by Thriftbooks.com User , 17 years ago
This is the original German text edition of a novel so beautifully written that it transcends into literature. Ingenious in its conception and carefully crafted, the author has created a unique and dazzling work of fiction. Divided into three parts, the book tells the story of a most unusual life, that of Jean-Baptiste Grenouille. The first part of the book establishes that he was born to a woman who was hung from a gibbet for having left him to die. It turns out that Jean-Baptiste is an unusual baby. He gives people the willies, because, unlike most babies, Jean-Baptiste has no scent. Over time, Jean-Baptiste develops into a boy with a secret gift. His olfactory sense is developed to a degree unheard of in humans. He delights in parsing the odors around him. Ugly, friendless, and a loner, he eventually ventures into the city of Paris, a malodorous and pungent cornucopia of smells. Believe me, there is plenty to sniff out in eighteenth century Paris! Jean-Baptiste savors each whiff, and the book conveys these olfactory delights with meticulous, descriptive precision. His bleak existence is transformed, however, when he one day captures a heady scent of such exquisite beauty that he finds himself obsessed with it. Determined to have that scent at all costs, he eventually sniffs it out. It turns out to be the scent of a young virgin on the cusp of flowering into a woman. It is a scent that he must possess. What he does to do so will surely chill the reader. Jean-Baptiste eventually maneuvers to get himself apprenticed to a perfumer, so that he can have the opportunity to learn the trade and create scents. He leads a bleak existence, subsisting as little more than a slave to the perfumer for whom he works. But no matter, for he learns all that he needs to know. The second part of the book begins when Jean-Baptiste leave his employer and goes on a personal pilgrimage, leading an austere existence away from civilization for many years. There, he withdraws into himself even further, living a totally self-sustaining, hermitic existence. He ultimately realizes what other have sensed about him. Jean-Baptiste has no personal scent. He simply does not smell. With this knowledge, he returns to civilization where, having lived as practically an animal for many years, he creates a fictitious and adventurous scenario to account for his filthy and disgusting appearance. Subsequently, he is taken under the wing of some local nobility and feted and pampered. Realizing the importance of scent, he creates a personal scent for himself. He now realizes that he who has the power over scent can rule supreme. He intends to do so. The third part of the book has Jean-Baptiste migrating to a town that is the hub for the scent trade. Perfumes, oils, and soaps are the stock in trade for this town and, as such, beckon brightly to Jean-Baptiste. Once there, he again smells a scent so delectable that he longs to possess it. He knows that scent for what it is and no

Fascinating, but not quite a Masterpiece

Published by Thriftbooks.com User , 20 years ago
When the first english language version of "Perfume" was released in 1986, readers went crazy. Many placed it among the best books they'd ever read, myself included. A reread, fifteen years later yields a different, more muted, reaction. The book is good, very good. But it is not great."Perfume" succeeds so well because the premise is so startlingly novel. An olfactory genius in 18th-century Paris who can make a fortune creating perfumes more complicated and subtle than any ever made, is a sociopathic monster. Or as Suskind describes him, a "tick" who can roll up into a defensive ball or periodically drop himself into society. Grenouille is a compelling and disturbing character because Suskind has painted him in such realistic tones. Each effort to capture a new scent impels him farther, taking more chances and testing his limits, exploiting new techniques and his own criminal daring. This is true criminal pattern and makes Grenouille terrifyingly believable.But the book can not be a great one, because Suskind's prose tends toward the overdone. Perhaps it reads better in the original German, but his maddening penchant for rephrasing and repeating the same notion and turning a sentence into a paragraph finally dulls the senses and sets the reader skimming along searching for the next important point.The plot is so unique that it is brilliant. The execution is powerful, not only in Grenouille's characterization, but also because Suskind has done his homework and is smoothly at ease with 18th century mores and the science of perfume. But the squishy repetitive prose and unfocused paragraphs keep "Perfume" from joining the ranks of literary masterpieces.

Published by Thriftbooks.com User , 22 years ago
In 18th century France, Jean-Baptiste Grenouille, born with no scent of his own, but with with a supernatural ability to detect the scent of others is driven to murder in order to create the perfect perfume. This extraordinarily original premise encompasses the most elegant, aristocratic and erotic novel I have ever read. Flawlessly written and drenched in irony, Perfume tells a haunting tale of a man reminiscent of the Phantom of the Opera, the Hunchback of Notre Dame, Beauty and the Beast (beast), and even Faust. Amd finally! A writer with enough talent to let us experience Grenouille's thoughts and emotions. Although, of course, identification with him is impossible, (Grenouille is the most chilling character in literature) I did manage to understand Grenouille's all-consuming passion, much to Suskind's credit. Suskind's prose is lush and evokative (the decadance of 18th century France simply comes alive) without spilling over into the purple prose of books like Violin or The English Patient. Perfume is a bizarre tale, but it is also lyrical and hypnotic--almost a fairy tale of terror. If you're looking for something different, something special, I highly recommend Perfume. The only other book I've found to equal it in originality is Jose Saramago's Blindness. Perfume, however, remains my alltime favorite.

Das Parfum, hate it or love it

Published by Thriftbooks.com User , 24 years ago
I have read "parfum" now for the third time and I still cannot get enough of it. The plot, the use of language and the subject are so fascinating that it is one of my favourites. Read it once and you'll understand a lot more of the world of scents.
Trustpilot
Copyright © 2022 Thriftbooks.com Terms of Use | Privacy Policy | Do Not Sell or Share My Personal Information | Accessibility Statement
ThriftBooks® and the ThriftBooks® logo are registered trademarks of Thrift Books Global, LLC