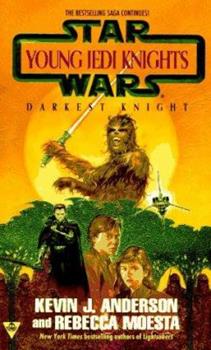 This description may be from another edition of this product. Jacen and Jaina, 14-year-old twins of Han Solo and Princess Leia, now attend the Jedi Knight Academy, which was set up by Luke Skywalker on Yavin 4. The twins are excellent students, but frequently...

The best in the entire Shadow Academy series

Published by Thriftbooks.com User , 18 years ago
If I could give it a million stars I would. When Lowbacca (or Lowie) learns that his sister, Sirra, is about to do the dangerous Wookie rite of passage he decides to go to Kashyyyk to be with her. His friends Jaina, Jacen and Tenel Ka agree to go with him. Little known to Lowie and his friends, the evil SHADOW ACADEMY also plans to go to Kashyyyk. But their plans are somewhat different. They plan to raid the Wookie's tech factory. This raid is under the leadership of Zekk (Jacen & Jaina's old friend who turned to the dark side), and the Nightsister Tamith Kai, plenty of stormtroopers, and another Nightsister. Well of course both parties collide and it is very exiting with a great ending. I highly recommend it to all Star wars fans and especially Lowbacca fans.

Published by Thriftbooks.com User , 19 years ago
Written by the terrific husband and wife team, Kevin J. Anderson and Rebecca Moesta, the Star Wars Young Jedi Knights series are not to be missed! These series of books center on the young twins of Han Solo and Lei Organa, Jacen and Jacen, and their friends, Lowbacca and Tenel Ka, as they journey on the road to becoming Jedi Knights."Darkest Knight", the fifth book of the YJK series, is the second to the last book of one story arc. The story begins where Lowie decides to return to his homeplanet of Kashyyyk, where his younger sister, Sirrakuk, is about to go through with a Wookiee rite of passage. That is each Wookiee must prove himself (or herself) in some way. And Sirra has decided to travel to the lowest levels of the planet to get some gossamer fibers from the terrifying and dangerous syren plant. Lowie desperately wants to help her so when Chewbacca goes with him, his friends naturally decide to accompany him. Meanwhile, Zekk who has now been named the Darkest Knight, must prove himself by accomplishing his own mission: to lead a raid on the computer center on Kashyyyk. Jedi Brakiss has total trust in him, though the Nighsister Tamith Ka still doesn't believe Zekk has truly gone over to the Dark Side of the Force. So Zekk must complete another mission... that is, to eliminate the young Jedis Jacen, Jaina, Tenel Ka, and Lowie, whom they know is on the planet.I must say that I just love the Young Jedi Knights, which is best read in order! I really like all Star Wars books but this series one of my favorites for the reasons that, 1) the characters are very interesting and close to my age, 2) superbly and well written, and 3) all books are exciting and full of adventure. This book especially has much excitement and suspense. The ending is also sort of a cliff hanger so I suggest you have the next book, "Jedi Under Siege", on hand. The four main characters of the books are well likable because each of them have their own personalities, characteristics, and quirks. Jacen with his love for all living plants, animals, insects, etc. Jaina with her mechanical ability and strong willed nature. Tenel Ka, the warrior and true friend. And of course Lowie, very courageous and strong. So I highly recommend you read all of the fourteen books in order. The series are divided mostly into three parts. The first six books are about the rising force of the Empire and its Dark Jedi Knights. The next five books are about how the Jedis must stop the Diversity Alliance. And the last three books are how the Jedis deal with Czethros and Black Sun. Another Star Wars series I very much recommend are the "Jedi Apprentice" series. Don't miss them!

It was the best I have read!

Published by Thriftbooks.com User , 23 years ago
I own the entire series of these books and this is the most descriptive and action packed books put out by Anderson and Moesta. When the they were in the under world I could almost smell the fungus and I could hear the stealthy plod of the jedi trainees and I would recommend this book to anyone. I must warn you that you might want to read the rest of the series first to avoid confusion.

As Tony the Tiger says "They're Grrrrrreat!"

Published by Thriftbooks.com User , 23 years ago
This was one of the first Star Wars Young Jedi Knights bookI ever read. I thought it was so good that I wanted to read all the books. I loved this book. IF you are a Star Wars FAN you would defenately like this book.-Christina Weatherly (age 14)

Published by Thriftbooks.com User , 24 years ago
I really enjoyed reading and wondering whether when Jacen, Tenel Ka, Lowbacca, Em Tedde (of course), and Lowbacca's sister Sirrakuk went down into the bottom layers of Kashyyk (kids don't try this at home) if they would get eaten by a siren, blasted by impereal storm troopers, get killed by the nightsisters, or all of the above. If you would like some suspense read this book, then read the next one Jedi Under Siege.
Copyright © 2020 Thriftbooks.com Terms of Use | Privacy Policy | Do Not Sell My Personal Information | Accessibility Statement
ThriftBooks® and the ThriftBooks® logo are registered trademarks of Thrift Books Global, LLC