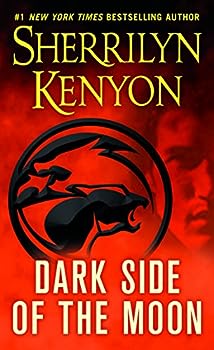 Dark Side of the Moon (Dark-Hunter)

Susan Michaels was once the hottest reporter on the Beltway Beat until a major scandal ruined her life and left her writing stories about alien babies and Elvis sightings. Life as she once knew it is... This description may be from another edition of this product.

Published by Linds , 1 year ago
Every time I read the next book in the series I love it more then the last! This is no exception!!

Too Bad Some Folks Missed The Point

Published by Thriftbooks.com User , 15 years ago
I'm sorry that the previous reviewers seem to have missed the point(s). I felt like this story was trying to explain a lot of things. Okay, so Rayven's character was not explained in the first two pages, but we discover as we go along why his personality is hidden. Ash, as we know is a complex peronality. Each character sees a different side of him; they may all agree on some points, but each has their own experience of how Acheron will or has responded to a given situation. More of his true nature is revealed in each book. I mean, why would he put up with the "heifer goddess" if he didn't absolutely have to? And his dealings with Nick... Remember it has been said that the fates of those most closely tied to him are hidden from his vision. Nick was his best friend, so his fate would especially be hidden from Ash. I felt that it was Nick's inability to be blinded to some of Acheron's powers that gave their relationship a special meaning. Would you really want to be able to control the fate/feelings of someone? How would you know if what they are feeling about you is not just because you manipulated it, but what they really feel? And as for Susan... I liked her character. Who cares if her marial arts training came into play later in the book? After all, she was trained by the Dragon, a Dark Hunter as well. People react in different ways. Some have to be guided to a feeling or reaction, but some just attack the situation verbally if not physically (Susan did both after she got used to her new perception of reality). Give the story a chance. Ms. Kenyon writes about men who had to lose something in the past, in order to gain something even more valuable in the present. Her female characters have to be strong to defeat the Dark Hunters' pasts.

Published by Thriftbooks.com User , 16 years ago
I have read the entire series (a couple of times). I intentionally read the whole series again just in time to get this new book. It helped build up the momentum. And helps me keep all the characters straight since some you meet in an early book then see them a few books later. VERY cool. Okay, I have to say I was a little nervous about her crossing over to hardback. Some authors change things a bit when they do that. But, Yay! I really enjoyed this book. It was great for a couple of reasons, the first (and goofiest on my part) being that it's up here in Seattle--awesome! Kind of fun, too, that the heroine knows right away that the hero is who/what he is (we don't have to wait pages and pages for the secret to be revealed and wait for her reaction). She is pretty funny about how her world changes from normal rag reporter to this whole new life with vampires and daemons. I also love how Miss Kenyon incorporates the real world into the story: like when we see Nick and a couple of others again and she writes a little bit about Hurricane Katrina--with emotion. Something else different is this story seemed somewhat darker than the others in this series. Ha ha, "dark" being a good descriptor... I mean, it seemed more graphically violent. It wasn't like a total "gory horror story" sort of thing, just a little more noticeable than her previous stories. I really have to warn you about one thing: the epilogue TOTALLY leaves you hanging--and it's a very dark and dreaded kind of suspense involving two favorites of mine. UGH!! I sure hope Miss Kenyon gets the next one out QUICK!!!

Published by Thriftbooks.com User , 16 years ago
Ok...So I do NOT understand how any fan of Sherrilyn Kenyon and her Dark-Hunter series could be disappointed with this book. The series just keeps getting better and better and that way includes the latest in the series, Dark Side of the Moon or as fans call it DSOTM. For those who haven't read the series and are thinking of reading this, you should start at Fantasy Lover because that starts the series and it is so much better in order even though you can read it out of order. Also go to hunterlegends.com because that will give you a complete reading order and so much more. This book added so much to the series and gave a great amount of juicy new info and the old characters we love and know. It also brought some great new loveable characters such as Ravyn and Susan. I recommend this to anyone who can open their mind a bit and enjoy fiction (it is called fiction for a reason. It isn't real and that is why we love it)

Published by Thriftbooks.com User , 16 years ago
I do not agree with some of the reviews. At the end of the day the author has created this world so if she decides to create a different rule for different characters, that is her perogative. I thought the fact that Nick now had some major problems quite understandable seeing as what happened in the previous books. He would blame Ash and without giving too much away, I think he attitude is understandable although you want to give him a smack for being so dense as not to see what this does to his former friend. I thought it a rather delightful twist bit like Angel going bad in Buffy. Do hope that it is not a permanent thing but lets be honest it is a wonderful story of escapism and long may Mrs Kenyon write about this world.

Published by Thriftbooks.com User , 16 years ago
After reading some reviews prior to receiving this book in the mail, I wasn't sure what to expect as the reviews for the most part seem to either love the story or were completely turned off. Good thing reviews don't determine whether or not I buy a book, especially from one of my favorite authors. Raven and Susan both came through the school of hard knocks and are still working their way to something that resembles a normal life or as normal a life as you can having the knowledge that they do and leading the life they have to lead. I started this book and didn't stop reading until I had completed every page, I only wish the story had been longer as I wasn't ready to stop but then again I feel this way about all of AG's books. I loved this story and the characters, well with the exception of Nick, who at this point is starting to sound like a whiney brat that needs a good swat on his bum. Had he given more thought to his actions a couple of books ago, he wouldn't be in the situation he is now. Sorry folks but he has no one but himself to blame. Worth the money and worth the read
Trustpilot
Copyright © 2022 Thriftbooks.com Terms of Use | Privacy Policy | Do Not Sell My Personal Information | Cookie Preferences | Accessibility Statement
ThriftBooks® and the ThriftBooks® logo are registered trademarks of Thrift Books Global, LLC